Ethan Hawke is an actor I've always admired. Even in movies I didn't care for -- Training Day (which got him an Oscar nomination), Sinister, and Reality Bites (he does rock the Violent Femmes, though) -- his performances in those films is solid stuff.

I thought Boyhood was good, but overrated. Yet his performance (which got an Oscar nomination), I felt was better than his Oscar winning co-star Patricia Arquette. Her role was one-note, where he had to change as a person in a much more subtle way.

I don't want to go through all his film credits, but will mention a few I loved: Gattaca, Dead Poets Society, Before Sunrise, and one of the best movies ever made -- Before the Devil Knows You're Dead.

He's recently done a few pictures that contribute nicely to music -- something I'm a fan of almost as much as movies.

Hawke did a documentary called: Seymoure: An Introduction. It's a terrific documentary about an amazing piano teacher. He also played Chet Baker in Born to be Blue. It's unfortunate the movie came out the same year that Don Cheadle got a lot more attention for playing Miles Davis. 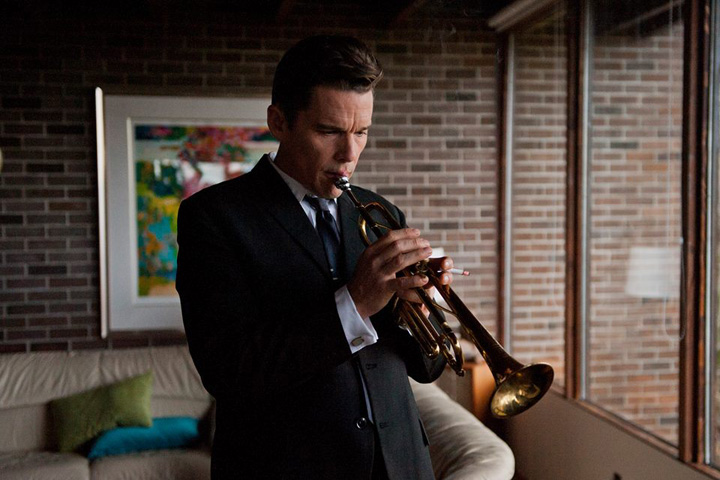 Now, the reason I bring all this up is because I did something that is both highly unprofessional, and it ended up thrilling me to pieces.

When I had my own radio show, I often interviewed musicians. If I was a fan, I'd have them autograph their CD. Now as a movie critic, I'll sometimes have the actors sign a DVD if I'm a fan. If it's someone I don't care much about, I don't bother. A perfect example would be the time I interviewed Channing Tatum. Now, my female friends want to kill me for saying that, but his work just does nothing for me.

When I interviewed comedian (and actor) Gabriel Iglesias, I did something I never ask celebrities to do. I wanted him to call a friend of mine. He had been talking for months about how much he was looking forward to Iglesias' concert/comedy film. I thought it would be cool to have him call the guy and say something witty. Iglesias explained how much he hates doing that. In his defense, he had lots of good reasons for turning down my request; but...it's not like there were lots of fans standing around that would also pester him to do that. It would've been a simple thing that went straight to his voice mail. I even had a few things ready that he could say that would've been funny (so he wouldn't feel the pressure to be "on".)

The second most unprofessional thing I did as a movie critic happened recently. I got an email from Ethan Hawke's camp about a certain movie he was involved in [side note: you can currently see him in The Magnificent Seven]. I asked one of the people I was emailing, if I could send her my DVD of "Before the Devil Knows You're Dead" for a signature. She said she could probably do that, and gave me an address to send it. I did that, and a few weeks later, she sent it back signed. I think that's one of the nicest things a manager could do. I'll give you an example of something on the opposite end of the spectrum.

I am dating a woman who is a big Bruce Springsteen nut. She's from New Jersey, so I think it's required that she's a fan of The Boss. Well, I was going to propose to her. I thought it would be cool to have a drumstick from Springsteen's long time drummer Max Weinberg, with the ring around that. We have an inside joke with her saying that's probably my favorite member of the , because we're both Jewish. Anyway, I contacted his manager, asking if there was anyway he could sign a drum stick, writing "Tina, marry this guy -- Max." The manager was rather curt about the whole thing, and he ended up saying "You can't afford what it costs to get that done." He then asked me to make an offer. I said I'd give him $500. He responded, "We don't consider any offers under a thousand."

So, I took the money I would've paid Max and his "manager" -- and instead paid a Bruce Springsteen tribute band to record a song I re-wrote to be about us.

It worked. She said yes.

The cliché would be to say here...that it was the happiest moment of my life. It certainly ranks up there.

But ya know what? I like to collect autographs. And having gotten something from a Springsteen band member, for a fan and a woman I love -- would've truly made this a magical moment.

At least there are managers out there like the ones who work with Ethan Hawke.