I’ve told autograph collectors before, that going to film festivals is the way to go. Obviously, not everyone lives nearby the big ones. Yet if you check the ones nearest to you, you’ll often be surprised by the guests they get.

At the San Diego Film Festival (now the San Diego International Film Festival) -- I’ve met Oscar winners Alan Arkin and Adrian Brody. Judd Apatow was great to talk to. Geena Davis was smiling and chatting with everyone that approached her. I talked to John Boyega (Star Wars) and Michael B. Jordan (Creed, not Chicago Bulls), before they became huge stars.

This year, I was thrilled to see actor Gil Bellows. My girlfriend pointed him out, as she was a fan of his on Ally McBeal. I knew him as Tommy from The Shawshank Redemption. He’s the young, ‘50s guy that shows up and has info that can free Tim Robbins character. I said, “You had a lot more hair back then.”

Perhaps that’s not the nicest thing to say, but hey...I have male pattern baldness. I’m allowed to go there. It was great hearing about some of his recent TV projects, including Parkland. The movie he was there with was called Dead Draw, which sounded interesting. I wished I had known he was going to be here, because I would’ve brought my Shawshank movie poster.

Sean Patrick Flannery (Boondock Saints) has been to a few of these, and he always has great stories.

One of the readers on this site is a huge fan of the band NWA, and I offered to get him the autograph of actor Jason Mitchell, who did a great job playing Eazy-E in the movie. He wasn’t interested, so I never bothered Mitchell for a signature. I was just thrilled to find out he was one of the gang members from the hysterical movie Keanu (if you haven’t seen it...rent it; you’ll laugh non-stop).

I couldn’t believe how beautiful Kate Beckinsale looked in person. Nobody was bugging her for autographs, but a few wanted selfies. I wanted to tell her how bored we were with her last movie -- Love and Friendship. Guys, don’t let your wives make you watch this Jane Austen picture.

Simon Helberg (The Big Bang Theory), was hysterical. He had everyone in stitches. I didn’t bother him for an autograph, and I didn’t want to tell him I hated his last movie Florence Foster Jenkins (Meryl Streep). I didn’t realize until later that he was in the Coen brothers movie A Serious Man. I would’ve loved to have asked him about that film. The couple everyone was excited about was 4-time Oscar nominee Annette Bening, and her husband Warren Beatty.

I didn’t know which item I wanted signed from her. I couldn’t find my DVD of The Kids Are All Right, which is one of the best movies I’ve ever seen. I thought about having her sign the postcard her husband signed for my mom a few weeks ago in L.A. Instead, I went with a note pad the film company sent me behind the movie Ruby Sparks. I had it signed by the writers, director, and star of the movie. Since Bening played a part, I thought it would be cool to add her signature. As she signed it, I told her how much I loved The Kids Are All Right, and how her performance in it made it so great. She had to be bossy, but not too much of a bi***h. She thanked me, and seemed to genuinely appreciate the compliment. 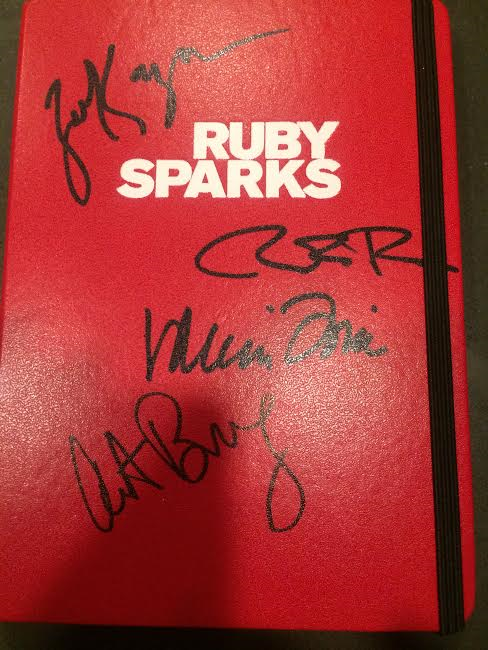 I ended up having a great conversation with her dad. I asked him his favorite film of hers, and he didn’t have an answer. I later heard him tell film critic Jeffrey Lyons, it was “The Grifters.” I know she was nominated for that, but the movie did nothing for me. 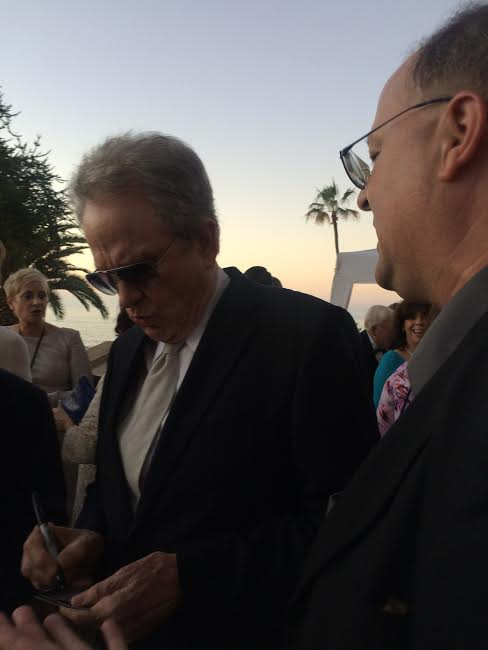 I was surprised when Lyons asked Beatty for his autograph. He wanted him to sign a baseball. I said, “You should have him sign a football.”

When Lyons asked me why, I responded, “Because he was the quarterback for the Rams.”

Beatty smiled, but Lyons looked confused. I explained, “In ‘Heaven Can Wait’, he was the quarterback.”

Lyons snapped, “I know that!” But, since Beatty had the Sharpie out, I had him autograph one of my business cards. He looked at it, and thought it was a cool card. Since he was that fictional QB of the Rams, I was tempted to ask him what he thought about the Rams coming back to Los Angeles this year, after 20 years away. Yet he wasn’t the most talkative, and I could tell a few other folks wanted to chat with him. So, I moved on to the free champagne.

When I finally left the festival, I looked at the autograph collectors (and dealers) standing by the doors. When Boyega was there from Star Wars last year, that was when they had the most -- about 25 people. This time, I saw four. One of them had a baseball.

Somebody needs to explain to me why folks like people that had nothing to do with baseball, to autograph baseballs! Regarding, the baseball signing, they do display well. I like having them signed too but it really makes little sense.

Well, at that same film festival a few years ago, people were having Tom Berringer sign baseballs. That made more sense, because he was in the movie Major League (and he may have played a ball player in something else that I'm not remembering).

The rationale I use when I get a politician to sign a baseball is that nothing is more American then baseball. (I don't know if that makes sense to anyone but me.)