This is the last post in my 4-part series revealing the truth about GFA authenticated autographs. The truth may shock you if you own any...unless you've tried to sell them.

Before I start on this most explosive, revealing, compelling and disturbing blog on Guaranteed Forensic Authenticators (GFA and Stephen Rocchi/John Gorajczyk), please observe the below image.

Please note also, over the years, I cannot recall that image with authentic autographs of Mantle and Ford. Please read my below blogs on GFA before you continue if you haven't read my previous threads on Guaranteed Forensic Authenticators.

Please observe the below image again.

If you go to the below GFA link, it shows the GFA Cert Check Data Base.

You simply type in the GFA Cert Number (without the GFAA).

Here is the result. 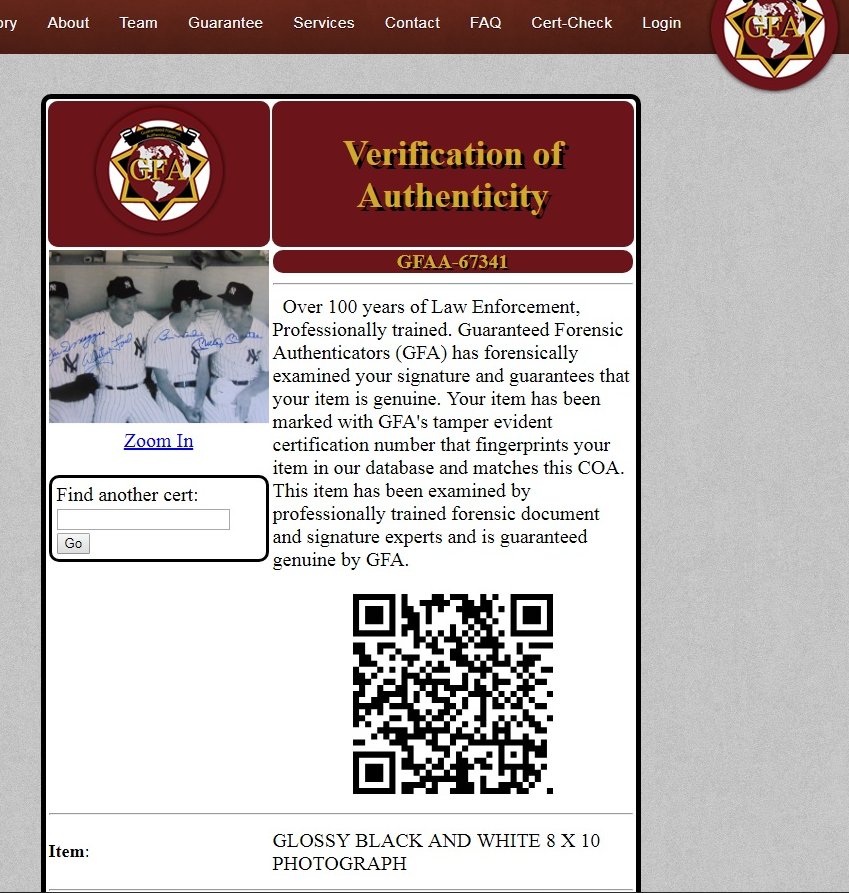 Here is an enlarged image showing the photo (Mantle, DiMaggio, Martin and Ford) from the GFA Cert Database. Now if you go back and read the latter part of my Part 3, you will read that I discovered nine consecutive (808941-808549) Mantle/Maris forgeries from the GFA Cert Check database and that piqued my curiosity, so I decided to do the same with other GFA cert numbers and that's when I discovered that GFA Cert Numbers 67341-67399, a total of 51, are the same Mantle, DiMaggio, Ford and Martin set of forgeries.

The first image in this blog are six of those images showing how identical they all all.

There is nothing shocking about this; I have observed it for years with GFA-certed forgeries/images that we have seen since the days of AtAuction and Ted Taylor, Drew Max, Christopher Morales and since Sept. 2011, Guaranteed Forensic Authenticators.

This blog is simply to illustrate the obvious about GFA.

I purchased a set of these forgeries just to get a hands-on look, and in addition to them being obvious forgeries and, in my opinion,mechanically-produced (printed) forgeries, they were produced on inkjet paper, as I have discovered two dozen times before. 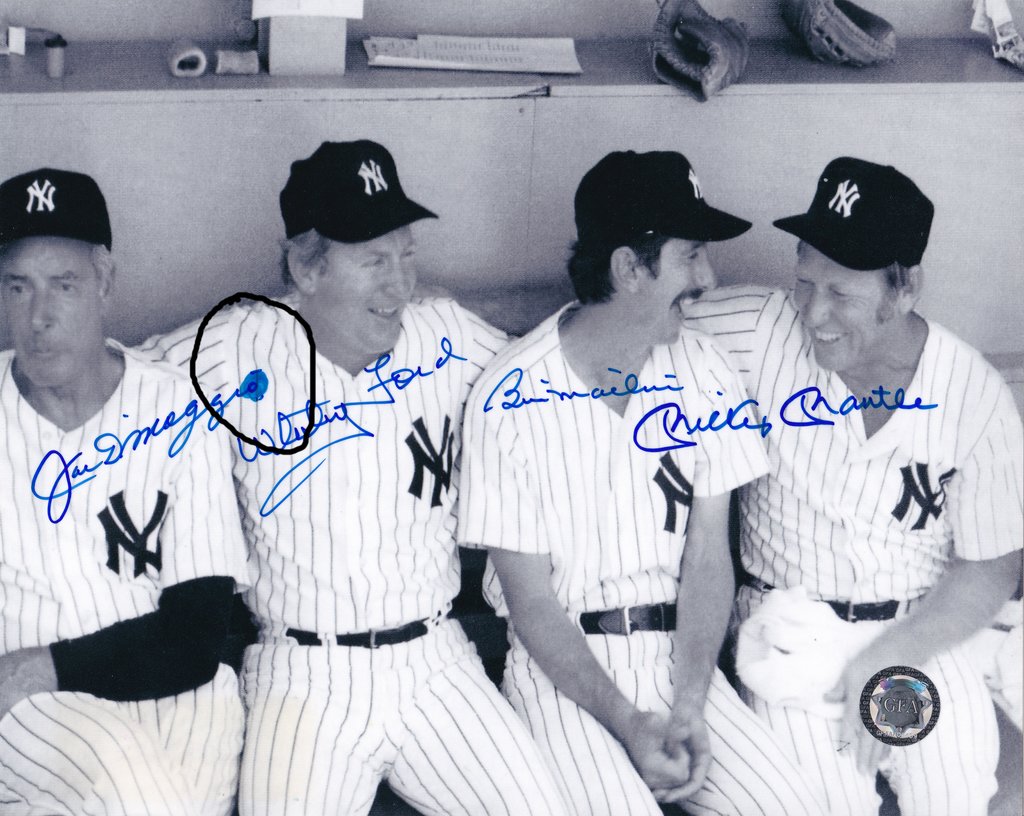 In my opinion, this is as incriminating as the forgeries themselves (which can be opined in one second) considering that GFA/Rocchi/Gorajczyk have been touting their so-called "New Technology and Sophistication" and their "Scientific Proof" that an autograph is either authentic or a forgery.

I have NEVER observed an authentic set of Mantle, DiMaggio, Ford and Martin autographs on that particular image and yet GFA/Stephen Rocchi and John Gorajczyk "authenticated" 58 just in one consecutive batch, and they're also all produced on inkjet paper (Mantle passed away in 1995 and Billy Martin in 1989).

They (51 in total in consecutive order) are all the same image of Mickey Mantle and Whitey Ford. shown below. 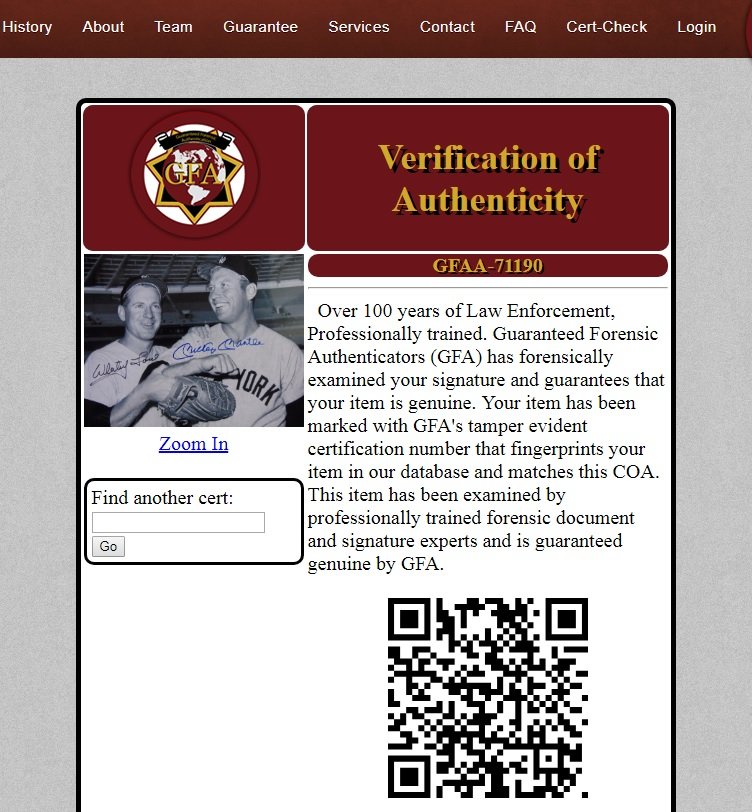 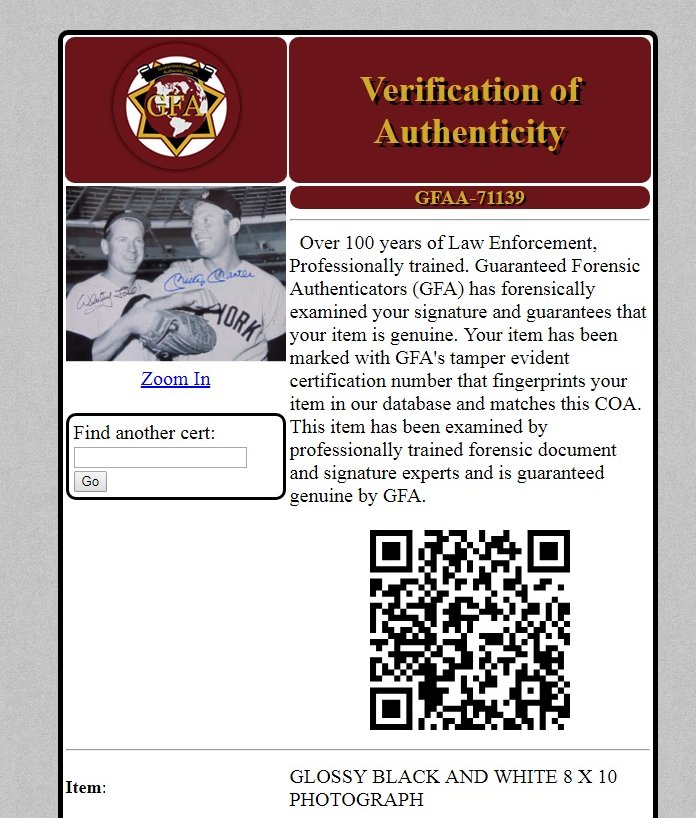 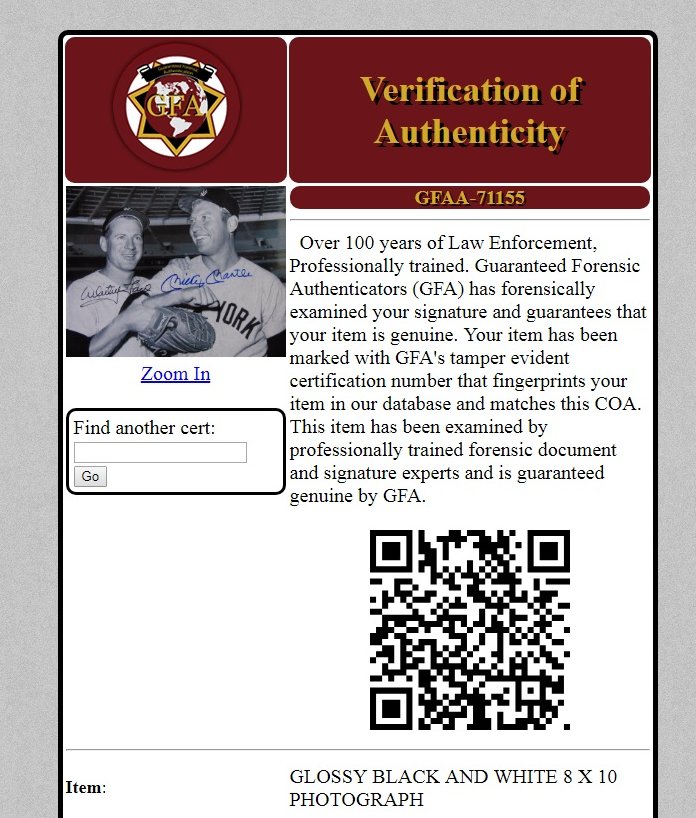 Once again, if you look at GFA Cert Numbers 71139-71190, you will observe that every image is almost identical to each other.

Please note that I have mined a ton of stuff from the GFA Cert Check database, but I have only exposed three batches here.

Over the years, I cannot recall that image with authentic autographs of Mantle and Ford.

Mantle and Ford never did a dual, private signing of this image for anyone.

I would also bet a year's pay that the person who submitted this batch to GFA didn't even pay $25.00 for the so-called "Forensic and Scientific" examination of these pieces.

Does it get any more blatant than this!!! 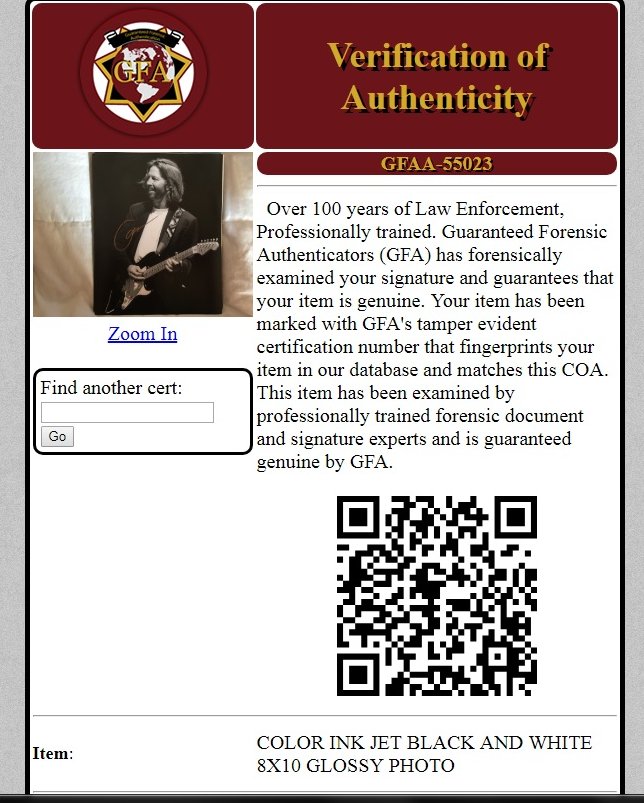 Is everyone seeing a pattern here!!!!

The autograph community was optimistic that there was going to be another Third-Party-Authenticator (TPA) to compete with PSA and JSA.

I was not one of those optimistic autograph collectors once I read the company name Guaranteed Forensic Authenticators.

Forensics have zero to do with opining autographs.

But that optimism was short-lived when autograph collectors realized the autographs authenticated by GFA were the same autographs (forgeries) authenticated previously by the likes of Christoper Morales, Drew Max (AAU), Ted Taylor and Nicholas Burczyk that were sold by the thousands on the old auction site called AtAuction.

They are called the Florida (where they are produced) forgeries.

I've written the following hundreds of times, but I will repeat it:

As of today, November 23, 2018, I have yet to observe one authentic autograph with a COA from Guaranteed Forensic Authenticators (GFA) since their inception in Sept. 2011.

As of Sept. 2011, the sports memorabilia authentication companies have used collectors and dealers as their authenticators.  These authenticators, highly respected in the industry have for their collecting and selling expertise have had little or no formal training in forensics and document examination.

Stephen's background in law enforcement along with his years of experience in authentication, working with well-trained forensic and document examiners, combined with today's latest technology, can produce scientific proof that signatures are authentic or counterfeit.

There is no "Scientific Process."  It does not exist.

There is no "Scientific Approach" to opining autographs.  It does not exist.

There is no "Latest Technology."  It does not exist.

There is no "New Technology and Sophistication."  It does not exist.

The aforementioned has zero to do with opining autographs because they do not exist, but Stephen Rocchi and his website make it read like there is some new "Science" or new "Technology" that GFA invented/created/utilizes to "Guarantee" that the autographs they authenticate are authentic.

Forgeries are meant to having the appearance of looking authentic, and since approximately 80% of the people who buy autographs are casual collectors and impulse buyers, forgeries are an easy sell, especially on Ebay, where EBay is an enabler of this garbage!!!

Add to that, the word Forensics, and the casual collector and impulse buyer are going to be impressed.

I will also add, that the scammers (intentional sellers of forgeries) use the Forensic COA as a shield (they know exactly what they are selling).

Does it get any more blatant than this!!!!

According the the GFA website, they have Three Tiers Of Authentication Service.

Yet, according to an ABC article that was posted after Muhammad Ali passed away and hundreds of questionable GFA-certed Ali autographs flooded Ebay, Rocchi stated GFA only charges $25.00 per examination because "He's proud of the low cost that is being delivered to the consumer," saying "this is the way it's supposed to be."

Rocchi also commented "He will put his lead authenticator, John Gorajczyk, who worked for nearly two decades as a forensic scientist for the Phoenix Police Dept., up against those at JSA and PSA.

From my observations over the past seven years, John Gorajczyk doesn't know squat about sports autographs...

And by the way, what does working as a Forensic Scientist have to do with opining autographs!!!

Now you know why GFA only charges $25.00 per examination.

"Over 100 Years Of Law Enforcement" with "Scientific Proof and Today's Technology" Did This.

Phenomenal research. thank you for your diligence in exposing fraudulence in the autograph industry.

Thank you, BG.  I appreciate that.

Thank you very much, Rick.

Superb research. Be sure to share it with law enforcement, such as FBI, or any local police that may have jurisdiction in the state GFA operates out of. To me, as a layman, it seems like you have provided very clear evidence of fraud. You may have made it easier for them to act on it, if they so desire.

Well layed out and to the point. Those funny looking items are funny looking for a reason...They are ALL FAKE and meant to deceive, which can be easy if you are a legal moron.

Thank you, Fudd and B. Anderson.

I will be posting a follow-up blog (Part 5) that will summarize everything about GFA.

It takes a ton of nerve to brag about "100 Years Of Law Enforcement," "New Sophisticated Technology," and "Scientific Proof" when it's all a bunch of BS!!!!

What does the inkjet paper comment prove? I have not been following along. Thanks