I Just Wasn't Made For These Times! My Meet & Greet with Brian Wilson, Al Jardine, and Blondie Chaplin.

After my meeting with Mike and Bruce It became my mission to finally meet Brian Wilson and Al Jardine. I had previously seen all of them together before during their 50th anniversary concert. However I never got the chance to meet either Brian or Al. I had already purchased a copy of Pet Sounds from Perry Cox that was previously signed by both Brian Wilson and lyricist Tony Asher  on October 8th 2009 at the Taschien Bookstore. I added on both Mike and Bruce in August, but also still needed Al Jardine. It felt incomplete to me and I knew that I would never shake that feeling if I didn't do whatever I could to "finish" my album.

At the time Brian had already announced his tour he wasn't playing any shows around me, I was hoping next year would be better as he was suppose to play a 50th anniversary tour for Pet Sounds. Out of extreme luck however he added on more shows to this years tour and just so happened to be playing 2 hours away from me at the Seneca Allegheny Casino on October 10th.

I first thought perhaps to just buy a ticket and chance trying to get Al Jardine on my Pet Sounds before or after the show. After really thinking about it hard that if I didn't get to meet both Brian and Al that I would be missing out on something special. I am 32 years old and most of my musical heroes are either A) already passed on or B) only going to be around for a little bit longer and I got to take the opportunity when it comes. I decided that I had to splurge and go for the Meet and Greet package. This would guarantee me a moment with my idols.

I was told via email to get to the show around 4:15 p.m, any later and perhaps you would miss check in for the V.I.P I decided to get there an hour early. Which was a good thing because I heard there was bad traffic coming in from New York and some people I believe did miss the meet and greet.

This was the first concert that I went alone. With the tickets being a ton of money I left my wife back at the hotel, I was able to meet a guy around my age who ended up sitting right next to me who was also a huge Beach Boys fan, so that was pretty cool. We waited in line (the same cattle herding just like many meet and greets are.) Then there they were. Brian Wilson, Al Jardine, and Blondie Chaplin. The handlers were a little bit nicer then the Mike Love and Bruce Johnston Meet and Greet, I was orginally told one small item, however they ended up letting us get two signatures each, I ended up getting Brian WIlson on my Love and Mercy 45 (to go with the Love and Mercy sheet music that was also signed by Brian Wilson. As well as my Surfin' USA album (which had previously been signed by David Marks on May 17th 2014 in Hickory N.C that I purchased off another Beach Boys fan.)

I shook Brian's hand and thanked him for all He and his wife has been doing for mental health awareness, he perked up said "Thank You!" and then he said "I had too!" Al Jardine signed by Pet Sounds Album and my No Pier Pressure album that was previously signed in silver by Brian via his website, and Blondie Chaplin also signed the No Pier Pressure. Brian Wilson No Pier Pressure (Signed in Silver by Brian via his website, Al Jardine and Blondie Chaplin, Wasn't SUPER excited how this one looks with how dark the cover looks and Brian's being in silver and the other's in black. However can't be TOO upset either!) 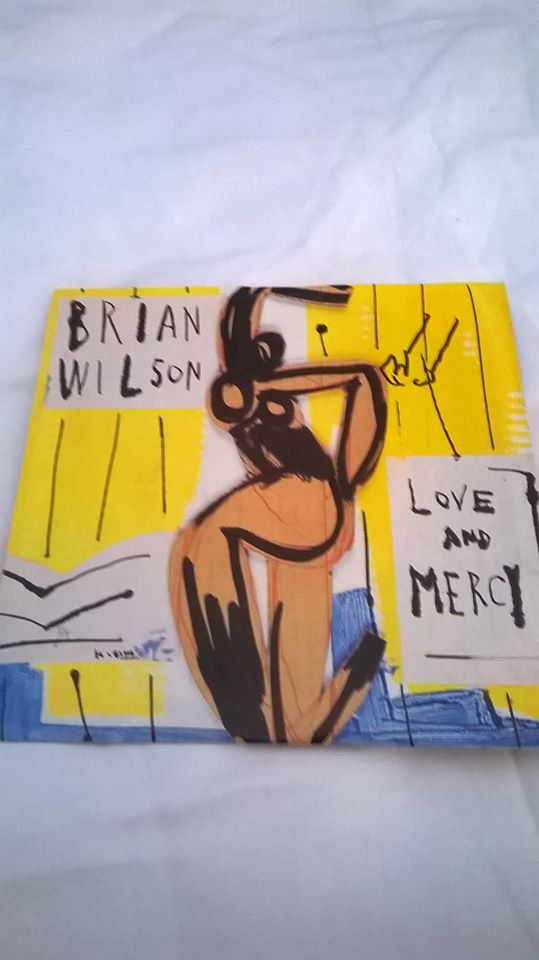 After meeting them we went in for sound check, which I wasn't sure how it was going to go down. They said we could sit anywhere, we could take as many photo's as we wanted and video. I shot pretty much every song that they all did during the sound check plus took some photo's. After sound check ended we were told we could leave for a bit and then take our seats for the show before it began. At this time I saw  Billy Hinsche alone on stage (who was Carl Wilson's brother in law as well as a musician that played on almost all The Beach Boys albums from Carl And The Passion's onward.) He is playing with Brian Wilson just in October, I went up to the stage and asked Billy if he would sign something for me. He was a great guy and I had him sign my Love and Mercy sheet music that they handed out to V.I.P's (as this was the only other thing I had for him to sign since it makes notice on the music for this tour)

The show was amazing. The whole band played great together. They played about 29 songs altogether. Brian's voice was a bit shaky in some parts, but still puts on a killer show. Al and Blondie both killed it as well as Billy and Matt Jardine. I was even able to get part of the setlist at the end of the show! This was well worth it and if anyone ever gets the opportunity to see Brian I would highly recommend going with the V.I.P!

Hi Matthew,
I have some extra signed Beach Boys albums I would be willing to sell if you are interested.  I obtained them all in person.  Please send me a PM if you want to see pics or are interested.

Great story and experience Adam!  Congrats on all the success!

Comment by Adam Halloran on October 28, 2015 at 1:32pm
Thanks Devon! I for sure recommend anyone who has a chance to meet on of their idols to do it if they get the chance. You never know what might happen and no one is getting younger. I love collecting autographs, but I was happier to meet these guys. 50 years from now bands like The Beatles or Beach Boys will be written in music theory classes like Mozart.

Comment by Matthew on October 28, 2015 at 1:34pm
Devon, I'm interested. I just send you a friend request. Please message me