A truly positive experience receiving an autograph! (Share your best too)

I wanted to provide a flip to the discussion asking people for the worse in person experience. This doesn't necessarily have to be in person, as I just had a wonderful example of an artist being extra kind to one of their fans.

Not many people are aware of the group The Swell Season (however they have a cult type following), in fact they aren't even together anymore. They are Glen Hansard and Marketa Irglova, if you have heard of the movie Once then you have seen them. They won an Academy Award for the song Falling Slowly back in 2008. I had the pleasure of meeting Glen Hansard (solo) a few years back, he signed two albums for myself and my wife and was one of our biggest dreams come true when we got to meet with him. They are mutually mine and my wife's favorite duo, However as I said they no longer are together, but continue to tour solo and produce new albums separate,

While I already had Marketa's albums (Anar and Muna) I knew that if you bought her albums on her website that she would sign them. I decided that I needed to finally complete my "Swell Season" group autographs since I don't know when I would get a chance to see Marketa again (she lives in Iceland and has two kids and hasn't toured in a few years) even if they wouldn't necessarily be signed on the same album. I decided to make a repurchase of her first album.

Two weeks went by and I hadn't heard anything, still I knew that it would be coming from Iceland so it may take a bit. I decided to send an email just to see. I ended up receiving an email back from her directly, sincerely apologetic for the delay it being the holidays. She said she could rush delivery it if I was in a hurry. I was so stricken by the fact that she personally wrote back to me, I explained it was no rush and I surely would wait!

Yesterday I finally received my package in the mail and realized right away it was a bit heavier than it should be. Inside was this note "Thank You Adam and Lucy for purchasing Anar Enjoy, Marketa" and then on the reverse it reads 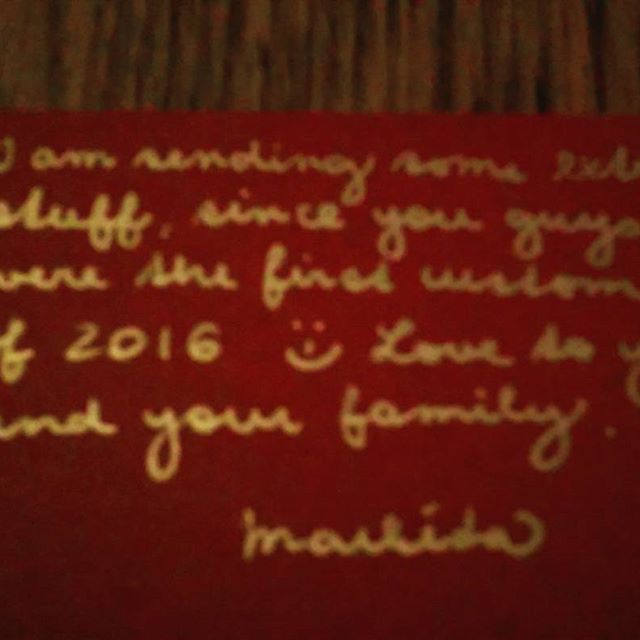 "P.S I am sending some extra stuff since you were my first customer of 2016 :) Love and Blessings to you and your family Marketa" 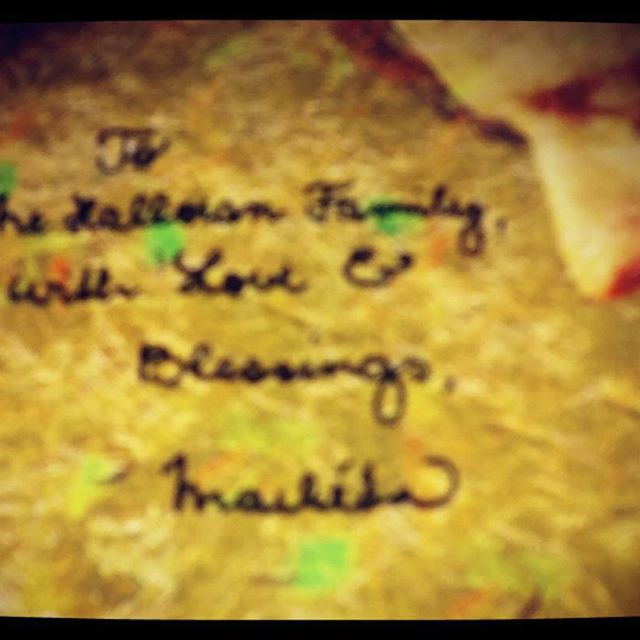 "To The Halloran Family with Love and Blessings Marketa" In my eyes this is an extremely gracious thing to do for a fan, she isn't the biggest name in the world but she is an Academy Award winning musician an singer and for her to go above and beyond is exactly the type of thing we all wish are heroes would provide.

I wanted to share this in hopes this blog can provide more outlets for others that have had truly great experiences (whether in person or through the mail) with artists, musicians, or anyone they admired.

Comment by Paul on January 22, 2016 at 5:17pm
A nice personal touch, Adam.
Mine recently was Lizzie bravo,the girl hanging around the beatles for a few years. I bought her book Signed and personalized.

That's awesome, I love to hear about good experiences!

One of my best was Nikki Sixx of Motley Crue/Sixx:AM. He came out to a crowd of us after the show and took time with each person. He talked to us and took his time signing autographs and taking pictures. He signed two things for me and pulled a pick out of his pocket and put it in my hand. For being such a big rock star that I've heard people say is cocky, he was extremely kind and down-to-earth with me and the others around me.

Speaking of Glen Hansard, I got to see him open for Eddie Vedder in 2012 and he was amazing. Which leads to another great experience I had with Eddie Vedder. After that very same show, he came out to the buses and shook each person's hand, thanked us for coming, and was very gracious. He didn't sign or take pictures but the handshake and him taking his time with each person was actually a better experience as a longtime fan.

Courtney Love has also always been extremely kind to me. She's actually way different than the horrible reputation that the media has given her.

Glen toured with Eddie down here as well, but I seen Eddie the year before.

Did glen sing with Eddie?

Yeah they did a song together. It was a really great show, one of the best I've been to.

Comment by Adam Halloran on January 23, 2016 at 4:15am
That is awesome! I love Eddie's UKE album. Glen plays on a track. I did get to catch The Swell Season in Cleveland in 2010 and Glen solo. My Glen experience was probably the best in person experience I have had (except meeting Brian Wilson) with Glen we got to meet and talk to him before the show, signed for us, a lovely lady took our pictures. The show was amazing and got a copy of the setlist after show.

It is great when your expectations end up being met or you come away with a true admiration for an artist because they know how to deal with their fans.

My all time favorite person that I got an autograph from was Richard Gordon (1925-1911) a producer who worked with Bela Lugosi and Boris Karloff. He produced "The Haunted Strangler" with Karloff is a movie I really like.   I first met him at the Monster Bash Conference in the Pittsburgh area a few years ago.  He had a table set up in a corner, and there were several others set up.  I noticed that no one was going up to his table and I really did not recognize him.  I went up to the table and saw his name and he had photographs of himself with Bela Lugosi.  He said hello and asked my name and shook hands.  We talked for quite some time and said I would like to get one of his photographs autographed.  He said of course and proceeded to autograph the one of him with Bela Lugosi.  I asked him to inscribe it to me.  I said how much do I owe. He said nothing that he was very happy to do it. I tried to leave him $20 the going rate for everyone else, but he smiled and said no it was his pleasure.  In later years he would often appear and I always made a point of saying hello.  He never once charged and said he was just glad some one was interested.  About the third year I met him I walked up and he said : "It's Scott right?  He was a wonderful, kind man, unassuming gentleman.  He was scheduled to be at the 2012 Monster Bash but died in November of 2011.  I still miss seeing him and talking to him.

Comment by Adam Halloran on January 25, 2016 at 11:08am
Awesome story Scott! I only live about an hour and a half north of Pittsburgh. I love going to the Monroeville Mall because Dawn of the Dead was filmed there.

I have been to that mall several times they had The Monster Bash in Mars last year. Ken Foree was at one of the conferences he was also very friendly his hand is like a baseball glove!  Pat Priest is another favorite of mine she had black and white photos for $15 and color for $20 as it happened I wanted a black and white one.  She graciously signed it and I gave her a twenty dollar bill and told her I didn't need any change she said "Yes you do! " and she got me a $5 bill.  Just a very sweet lady.

Comment by Adam Halloran on January 25, 2016 at 11:29am
Awesome! I've met both Ken Foree and Tom Savini at the Eerie Horrorfest in Erie PA. I really like chatting with the horror guys they are usually really nice. Tony Moran from Halloween was my favorite. He didn't have a line and we chatted for a couple minutes, same with a couple extra zombies from Dawn Of The Dead. Really nice people!

As a movie critic, it was a pleasure to watch a movie (musical?) as wonderful as ONCE. Saw them live, and they both signed. Funny thing was...I went to dinner with a few friends hours before the show downtown. When walking to venue, they were filming a video walking down the streets. So, we talked to him a bit between breaks. A class act.

Eddie Vedder did the handshake and "one item per person" bit. He is from San Diego, so perhaps he was nicer (and I brought up a mutual friend, which helped; yes, I got a second item signed, too. My friend was yelled at for trying to get him to sign a guitar).