All You Need Is Love-When Collecting The Beatles!

I never had the chance to see The Beatles perform in concert. I was born in 1983, sadly a few years too late to be a "first generation fan".... Okay well more than a few years too late.
Also with there never being a chance for a true reunion with John Lennon having already passed on before I was even born, who knows what could have been had all four been here today?
I grew up mostly with new wave music in my early youth as an 80's child my memories are also of George Harrison and The Travelling Willbury's, with both Got My Mind Set On You and Handle With Care videos played memorably on MTV rotation...This was when I first fell in love with a Beatle in my youth. Along with listening to the "oldies" radio playing The Beatles hits that would pave my love of music and the 1960's era that I never was able to experience.
However I am lucky and grateful to have had the chance to see Paul McCartney in concert five times and Ringo Starr four times and hope many more still ahead. Not to mention the numbers of "tribute" acts that try to do the music justice.
In 2011 I bought my first "Beatle" autograph. Before this I had not collected many autographs outside horror show conventions. It was a Ringo art piece titled "Starr"( cleverly titled right?)  With only doing my own research at the time, I knew that I could trust to buy a legitimate piece through the same art gallery that goes out on tour with Ringo. To this day I still treasure it highly. 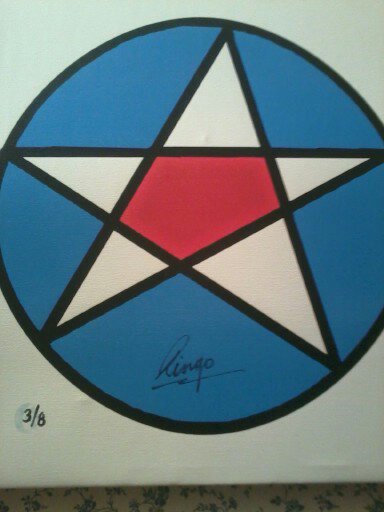 (Ringo Starr signed "Starr" )
Two years ago I bought a Paul McCartney signed programme from Rockaway Records that was signed in 1968 at "The Talk Of The Town" in London by both Paul and his then fiancee Jane Asher (who McCartney had written a fair share of songs about their relationship.) It has been authenticated by one of the best in the industry Frank Caiazzo and discovered it was likely signed at The Supremes debut performance in the London club.
Now 1968 is important as it is my favorite year associated with The Beatles and this being signed only a couple weeks before they were off to India and writing music for what would become The White Album.
It also holds extra meaning knowing he was still a Beatle when this was signed! To me there is something special added to it compared to more modern signatures, as the history holds meaning. Since I have wanted to pick up a George Harrison autograph for a few years at the very least (I decided on a Eric Clapton signed tour programme last year instead, being one of my favorite guitar players.) George is perhaps The Beatle that served a major link from my early years to today.
I knew from all of the great experiences I have heard from others that I had already decided to go through Tracks UK for my next purchase. I got in contact with Jason Cornthwaite, whom I can't speak more highly of as he answered all my questions with the utmost respect.
I fell in love with the history of this programme just as I did the McCartney signed programme from 1968, this one served a dual purpose as it not only holds a vintage 1963 George Harrison signature, but also a vintage Ringo Starr full graph! This is the description from the Tracks listing that also got my blood flowing for the past few months before making my purchase:
"An original concert programme from the Chris Montez and Tommy Roe tour which also featured The Beatles. The programme has been signed in a blue pen on the reverse by George Harrison and Ringo Starr. George has added ‘To Josephine Love From’ and ‘xxx’ before and after his signature. The signatures were obtained in Birmingham on the 10th March 1963. It comes with a detailed letter from the original recipient detailing how the signatures were obtained. The programme measures 20cm x 26cm (8 inches x 10.25 inches)."
I understand there are many things about this program that may turn others off. It is only signed by two out of the four Beatles, there are many examples to come from 1963 (so rarity scale isn't over the top), the Ringo is a bit obscure over his image. Etc.
It being personalized "To Josephine" I am sure also would be considered a turn off for some others, however to me, this adds to the story and puts a face of someone, a fan from that period who was able to experience something special. That this women met both George and Ringo in 1963 and they took the time to sign for her, perhaps she haf not known at that time just how important to music The Beatles would ever become!
The following information is from the website "The Beatles Bible." about the concert this was signed at:
"The 10th of March 1963 was the second date of The Beatles' UK tour with Tommy Roe and Chris Montez and took them to the Hippodrome Theatre in Birmingham.
Although The Beatles hadn't been placed on the top of the bill prior to the tour, the audience reaction after the first night in London ensured that the group closed the show on this and all subsequent tour dates.
The Beatles performed a six-song setlist throughout this tour: Love Me Do, Misery, A Taste Of Honey, Do You Want To Know A Secret, Please Please Me and I Saw Her Standing There."
Being able to paint the picture in my head or get as much information about a piece is important to me as a collector. Especially on vintage items like this programme, almost 54 years after it was signed. It is the history of autographs that I treasure most.
I was going to wait till March 10th to post this blog, as it would be the 54th anniversary from when it was signed, but I couldn't wait and this being what would have been George's 74th birthday today it is a good enough reason to post a bit early I believe!

Personally, I think this signed program is fantastic! The history of the piece also adds a dimension that cannot be found in most autographed items. Authenticity is vital the having the rest of the story makes it complete.

Comment by Adam Halloran on February 24, 2017 at 7:37pm
Thanks a lot Joe! I especially love how this was signed 12 days before their first lp Please, Please Me came out. Also their 2nd tour already (coming off only a weeks rest from their first UK tour with Helen Shapiro)

I know it pales to some other great pieces I have seen, but I love history and Beatles history! This has enough to keep me excited!

Great blog Adam I was around in the 60s but never got to see them they did perform  near where I lived but I was only 10 at the time and don't think mum fancied them although she did take me to see dave clark, hollies ,and kinks all on same bill and performing twice nightly on that tour? My main autograph project  at the moment is collecting anything beatles related le; wives girlfriends sons and daughters collaborators you get the drift it's quite interesting when you serch into there history

Comment by Adam Halloran on February 25, 2017 at 5:08am
Alan that is amazing! I have been doing the same (associated people with The Beatles) I have been trying to aquire autographs of everyone (that I know of) that went to India as the same time The Beatles hsd to study under the Maharishi. That will be a future blog post, but it is enjoyable to jump into a few spots in history and learn as much as you can!

Amazing that you saw those bands even at 10 yrs old too! I am jealous! Thank you Alan.

Great post Adam, and great stuff. George is on my short list of autographs that I really want to add to my collection as well. I have had Pauls and Ringos and moved them on from my collection, I kind of fell into my John Lennon, and really treasure it, but George has eluded me repeatedly.

Thanks for lighting that spark again.....

Comment by Adam Halloran on February 25, 2017 at 5:34am
Thank you Pete!! That spark is what makes me excited! That and fellow collectors like yourself and others knowledge and awesome pieces keep me motivated!

Great stuff and all with good provenance (just in case you ever sell). George is on my shortlist also. Have been debating on buying one of his signed books. One of these days.

Comment by Adam Halloran on February 25, 2017 at 8:12am
Thanks Ian! I had contemplated also going with one of the books, mainly cause I find tge artwork inside whimsical with the gnomes. I also like the idea of buying the Genesis book, Fifty Years Adrift by Derek Taylor (The Beatles and Apple records former press officer and publicist) as it is signed by both Derek and George Harrison. I decided to go with something more vintage and I like the idea of them signing while still in the group.

Just in case you didn't  see this adam 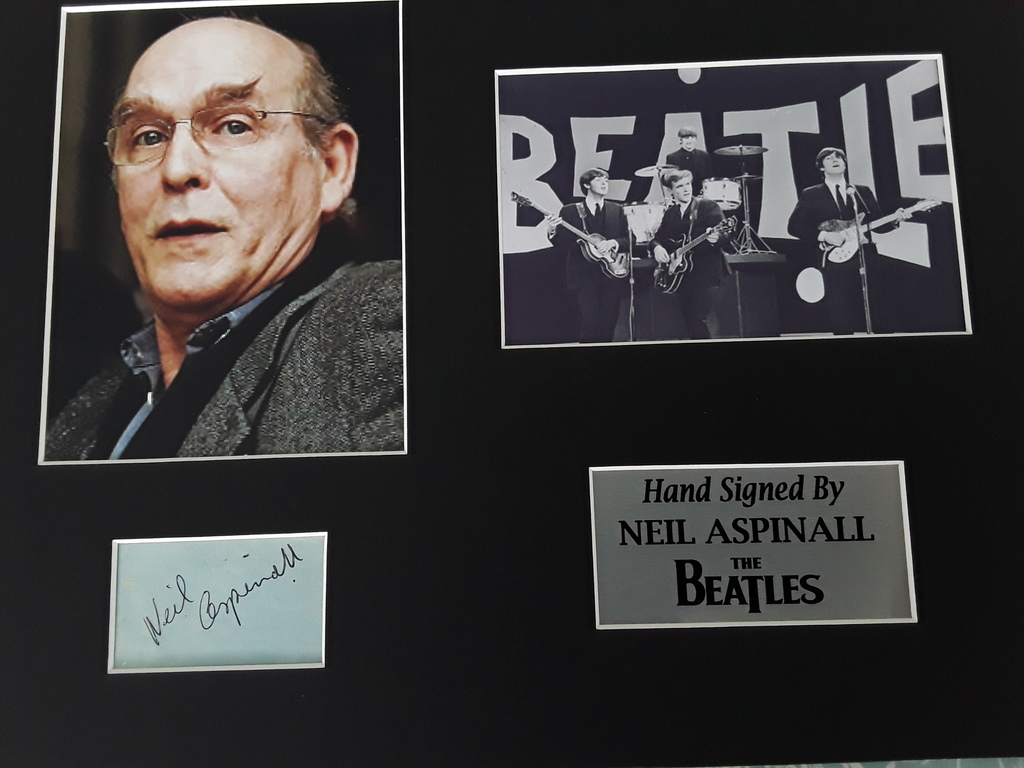 Comment by Adam Halloran on April 11, 2017 at 12:48pm
I did see that Alan! I love the photo with it too filling in for George. I hope to one day get his autograph. I still need to get Mal Evans and Maureen too.

It is so much fun seeing everyones collection on here, especially Beatles autographs!