The Muses In Music And Other Assorted Inspirations.

Where does inspiration come from? For many musicians a song can be a throw away or nonsensical or have no deep meaning at all.  Others, perhaps had come to them in a dream. The song "Yesterday" had been said to have came to Paul McCartney this way and "Across The Universe" made its way cosmically to John Lennon.

However, what I have always found more fascinating, is how love or even lust can drive someone to write the most beautiful songs and perhaps rocks greatest muse was both the first wife to both George Harrison and Eric Clapton. Pattie Boyd has had so many songs written about her it is almost surreal. The most notable of them being The Beatles "Something" and Eric Clapton songs "Layla" and "Wonderful Tonight" helping to inspire two of the greatest rock musicians create some of the most beautiful songs. 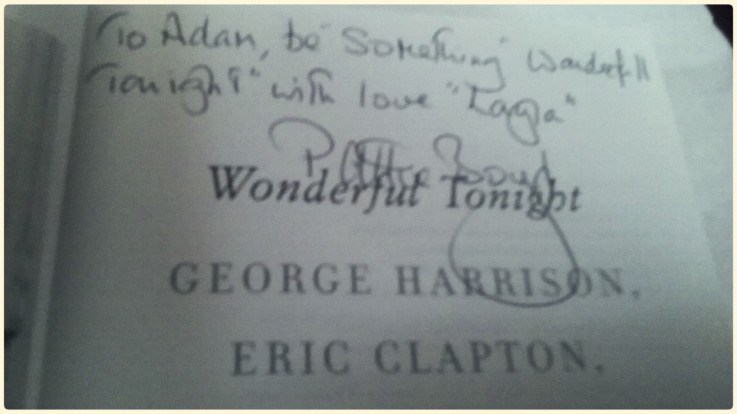 In fact as many of you probably know that Eric Clapton's band Derek And The Dominos 1970 album "Layla And Other Assorted Love Songs" was a secret ode to Pattie...While George Harrison, his friend, was still married to her! In my opinion rock and rolls greatest love triangle ....Heck! even Pattie's sister Jenny inspired Donovan's song "Jennifer Juniper" and was a former wife to Mick Fleetwood. I am a pretty big Beatles fan myself, having previously wrote another blog about that here. My real passion being the history and stories behind these people and places they have been. I have been lucky to have had communication with some of the ladies that have helped inspire the music I love. That is including Prudence Farrow who the song "Dear Prudence" was written about, she had became so serious about her meditation that she had locked herself away in her cabin in Rishikesh India in 1968 studying under the Maharishi that John Lennon wrote this song. It is hard to believe these songs only exist because of these ladies Comment by Christopher on October 25, 2017 at 8:51pm
Cool post. I enjoyed reading this and seeing your signed items. Passion clearly inspired Rumours, a modern masterpiece that will likely be as powerful 50+ years from now. Not comparing Stevie Nicks to Pattie Boys per se. Just observing how brilliant music can be when so inspired.

I also enjoyed it. I was reminded of the photo of John Lennon with the Mr. Kite poster.

Comment by Adam Halloran on October 26, 2017 at 3:12am
Yes! Exactly. There are so many points of inspiration for a song writer and it is amazing how an object or a person can be a catslyst.

While I am not a huge Crosby, Stills, and Nash fan (I love vocal harmonies) I am a fan of Suite: Judy Blue Eyes which Stephen Stills wrote about then girlfriend Judy Collins.

It is crazy to think perhaps these songs would never had been written without the relationships they made. I also wonder what it is like being that person the song is written about and if they understand how important they were to the process.