February 22, 2011—In 2009 and 2010, the Internet Autograph Dealer Alliance (IADA-CC) published several articles about rock autograph expert Roger Epperson. These articles accused Epperson of everything from selling fake autographs, to authenticating forgeries as genuine, to credit card fraud, to being the subject of an FBI investigation and more. But the IADA-CC issued a public apology to Epperson today, admitting that none of their accusations were true.

The apology, published on the IADA-CC's Web site, called their articles about Epperson "malicious," "false" and "unjustified," and was signed by president Michael Frost and former officer Richard Scott.

Frost is the owner of Professional Autograph Authentication Service (PAAS).

The IADA-CC said the information in the articles came primarily through emails from sources they trusted at the time, and that some of the emails contained links to Web sites that published similar false information about Epperson. The apology further stated that they found "...most of the e-mails to be coming from enemies of the autograph hobby and from fraudulent e-mail addresses with an anti 3rd party authentication agenda."

No names of persons or Web sites involved in the articles that the IADA-CC called false were mentioned in the apology except for Dave Wakefield (aka Dave Smith). Wakefield is the owner of Florida autograph gallery Rock and Roll Heaven Memorabilia Inc. (www.rocknrollheaven.biz), and was recently pictured with his face blocked out in a Feb. 14, 2011 article on Autograph Alert accusing James Spence Authentication of being biased against autographs authenticated by Christopher Morales. 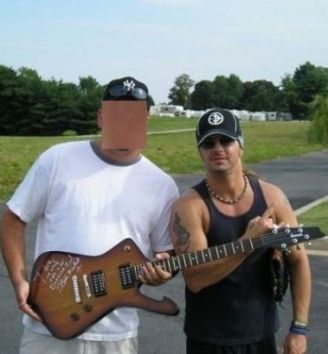 Dave Wakefield with face blocked out in Feb. 14, 2011 article on JSA on Autograph Alert Web site. 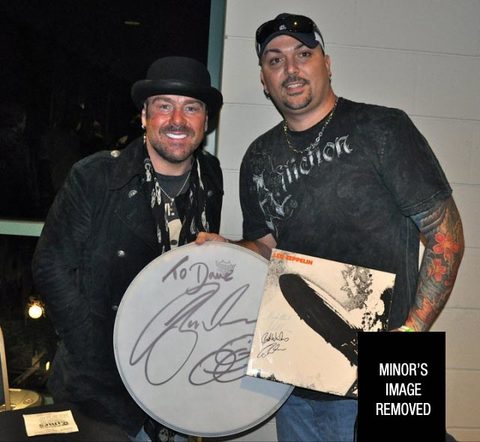 Dave Wakefield in photo from his Web site, www.rocknrollheaven.biz.

Articles similar to the ones that the IADA-CC apologized for were posted on autographalert.com and behindthegavel.com in 2009-2010, and were still on those sites when we checked today. While both sites operate anonymously, the parties involved are known. Behind the Gavel was founded by Jerry Gladstone of American Royal Arts in 2009. Gladstone is the subject of an FBI investigation into the trafficking in rock 'n' roll forgeries. American Royal Arts filed an Assignment for the Benefit of Creditors in July 2010; a Florida version of bankruptcy. ARA continues to operate under Court supervision.

The IADA-CC's apology was originally posted on their Web site Feb. 22, 2011. They replaced that version with the one they slightly edited, below:

Notice to all members and visitors to the IADA-CC,

In recent months you may have seen information and news articles posted on the IADA-CC website attacking the integrity of a long time autograph collector, dealer and authenticator, Roger Epperson. These articles were malicious in nature and were way outside the scope of anything the IADA/CC stands for.

It is for this reason Michael Frost and Richard Scott of the IADA-CC are taking this opportunity to publicly apologize to Roger Epperson and his company REAL.

The IADA-CC had been receiving many e-mails daily from collectors and others believed to be trusted sources. The e-mails were sent to the IADA-CC under many different names and seemed credible at the time to our news director.

We were also sent several links with information taken from other websites that may not have been true. These e-mails were coming to the club and to the club directors daily. After a fact-finding mission, neither the IADA-CC nor its officers including Michael Frost and Richard Scott have any knowledge of any fraudulent or unethical activities by Roger Epperson. We find the following information that has been posted or emailed to be absolutely FALSE and unjustified. We also have found most of the e-mails to be coming from enemies of the autograph hobby and from fraudulent e-mail addresses with an anti 3rd party authentication agenda.

a. Roger Epperson authenticated signatures on album covers that were knowingly forged or not signed until after the death of signatories, and charged Dave Smith a/k/a Dave Wakefield [Editor's Note: It is actually Dave Wakefield aka Dave Smith, as Smith is Wakefield's alias.] for the authentication and then offered to purchase the albums. This statement is false and we found the published allegations to be untrue and the result of false information provided by others to the IADA-CC with intent to damage the character and authentication work of Roger Epperson.

b. Roger Epperson issued Letters of Authenticity and in many cases never examined the autographs. This statement is false and we found the published allegations to be untrue and the result of false information provided by others to IADA-CC with intent to damage the character and authentication work of Roger Epperson, .

c. An article in IADA-CC news “The Roger Epperson Scandal and investigation, is handed over to the authorities,” statement that there was a Roger Epperson Scandal that was being investigated by authorities, including the FBI, that IADA-CC had received reports of errors in authentication and selling of non-authentic material by ROGER EPPERSON, that a watchdog committee set up to monitor the action of Signed, Sealed & Delivered and “REAL,” two of the Epperson Companies had reported dozens of questionable items removed from ROGER EPPERSON’s website, that IADA-CC was receiving reports from major auction companies, eBay and dealers removing Epperson authenticated items from their sites, that ROGER EPPERSON had been officially removed from being a member of IADA-CC. This statement is false and we found the published allegations to be untrue and the result of false information provided by others to IADA-CC with intent to damage the character and authentication work of Roger Epperson and the IADA-CC apologizes.

To show good faith and unity the IADA-CC would like to offer Roger Epperson a full life time membership in the IADA-CC.

The IADA-CC reorganized with only one goal in mind and only wishes to accomplish this goal. We are here to help promote the autograph world as a wonderful and valuable hobby, create lines of communication among its members, and help to educate our public in making good choices in finding rare and collectible signatures.

We all make mistakes, and for this mistake we sincerely apologize to Roger Epperson. We wish him all the best and hope we can, in some way, work together in the future.

We think Roger Epperson is a valued and important part of the autograph community. It is very important that we are able to work together or at least communicate. Michael Frost, Roger Epperson and the IADA-CC have a common bond and that is to educate and to help the autograph community. We should have been spending our time and effort fighting the bad guys in the industry and not each other.

The infighting among the most important and respected members of the autograph community must stop. The time has come to focus on bringing back a safe environment for autograph collectors.

We sincerely hope that Roger Epperson and the autograph community accept our apology.

Additional information on this story will be provided as it becomes available.

I don't know if they're the same as Autograph Store or Czar autographs, but he's currently the biggest seller of PAAS autographs on eBay by far. So did he buy into PAAS? I was shocked to see Mike Frost emailing me with Famous Faces' disclaimer.

Do a little research, I think you will find that Bob Jones shopped his material around to a few other authentication companies too.

@Steve,  I'd say "very" similar from X-SID-PRA: iada-cc info@iada-cc.com and thus it is now in the public domain!

Subject: Here is a Christmas treat for all. The problem with 3rd party Authentication;
From: info@iada-cc.com

I am stunned the IADA-CC would post a vicious personal attack on their news page. I thought this was a legitimate organization. It’s completely inappropriate and unprofessional. If I was a member, I’d want to know how this could happen under the official banner of the club. How embarrassing.