This article originally appeared in my blog, Steve Zarelli presents...

James Stewart was a willing through-the-mail signer for many years. However, after suffering medical problems in the 1990s, his office fulfilled mail requests with secretarial signatures and an Autopen machine.

The proxy signatures -- typically signed "James Stewart" -- are obvious to anyone with some familiarity with James Stewart's authentic signature. 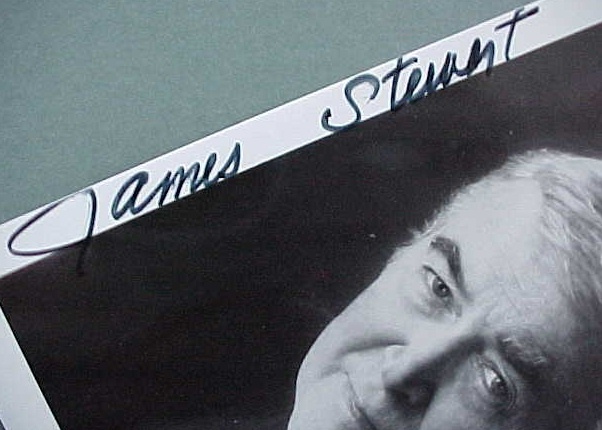 Autopen machines are most commonly used by politicians and astronauts, so some collectors are fooled and do not consider the possibility of an Autopen for a Hollywood celebrity. While some collectors are familiar with the "Jimmy Stewart" pattern sent by his office primarily on photos, there were at least four other Jimmy Stewart Autopen patterns.

In the 1990s, I had a friend who worked at Crown Publishing who provided me with a dozen signed bookplates from Jimmy Stewart's book, Jimmy Stewart and His Poems. In the stack of bookplates, I identified five different Autopen patterns. Regrettably, I never properly scanned the bookplates and I thought they were lost in a move over ten years ago. As luck would have it, I recently found them mixed in with some old photos I haven't looked through in many years. There are matches for patterns 1 through 3. There were not matches for patterns 4 and 5 in the batch, however, close examination of the signatures shows tell-tale Autopen signature characteristics: hard stops and starts; evidence of machine vibration; and very subtle "jerky" mechanical motion associated with the Autopen armature. From many years of studying the nuances of Autopen signatures, I am confident 4 and 5 are Autopen machine signed without having the benefit of matching examples.

In my experience, pattern #1 seems to be the one Stewart's office used most frequently and often appears on photographs. That said, it is entirely possible they occasionally used one of the other patterns, so be on the look out for any one of the five!

Comment by Richard Booth on March 30, 2015 at 7:25am
Thank you for the great autograph study, most informative Steve.

Comment by Steve Zarelli on March 30, 2015 at 7:30am
Thanks, Richard. Hopefully this opens some eyes. To my knowledge, Stewart Autopens have been poorly documented to date. Other than the first one, I have not seen the others documented elsewhere, and unfortunately I have frequently seen them offered as authentic.

Comment by Mike T on March 31, 2015 at 1:46pm
Is it crazy to anyone else that they actually took the time to create 5+ different auto pen patterns? Just sign the damn things already.