I was first made aware of Kenny Wayne Shepherd in the early 90's when people were talking about this young guitar phenom.  I bought his first CD a few years later and was pleasantly surprised.  In 1998, he opened up for my favorite band Van Halen (yeah it was the tour w/Gary Cherone on vocals).  I was in the 7th row on the floor and was blown away at his musical ability and guitar tone.  I actually caught one of his guitar pics too!  I bought a couple of other CD's over the years but always seemed to miss him when he played the Cleveland area.  This spring, I was very happy to see that the KWS Band was going to play a small local club in June so I got my tickets ASAP and it was a good thing I did because the show sold out. 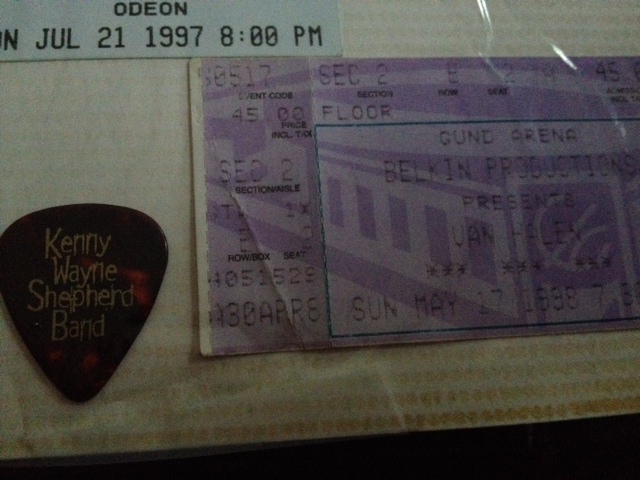 I have had some success meeting different artists after shows at this venue for a couple of years so I figured I would try to get some things for the band to sign.  Chris Layton is his drummer and was apart of Stevie Ray Vaughn's Double Trouble, Tony Franklin plays bass and was in The Firm w/Jimmy Page and Paul Rodgers.  That day, I decided to go to a local record store (yes there are still a few around) to get some SRV records and The Firm.  They had 1 Firm lp but no SRV.  It was about noon and I decided to try another record store right by the venue where he was playing.  Something told me to put the items in my car (CD covers, lp flat) just in case they were there early.  But I didn't.  Why would they be there so early?  So I drive to the store, go right by the venue and I see the tour bus and trailer.  And there they were: Kenny, Noah and Chris standing on the sidewalk talking.  I couldn't believe it!  I had nothing for them.  So I park, go to the record store and there was nothing there either.  I decide to go home (10 minutes away) get the things I have and go back.  Of course they weren't there.  When I returned, there was 1 other person there to meet the band and he had a few items for them to sign.

After about 30 minutes, Tony Franklin comes off the bus and comes over to us.  He couldn't be nicer.  He signed what we had, took pictures and talked about the band and being on the road.  About 45 minutes later, here comes Kenny and Noah walking up the street.  We ask if they had time to sign and they said sure.  Kenny said he would only sign 2.  That was fine because that's all I had for him.  Noah was real friendly, saying he was happy to be back in Ohio after spending a few days in Canada.  I told then I was looking forward to the show and I would see them later. 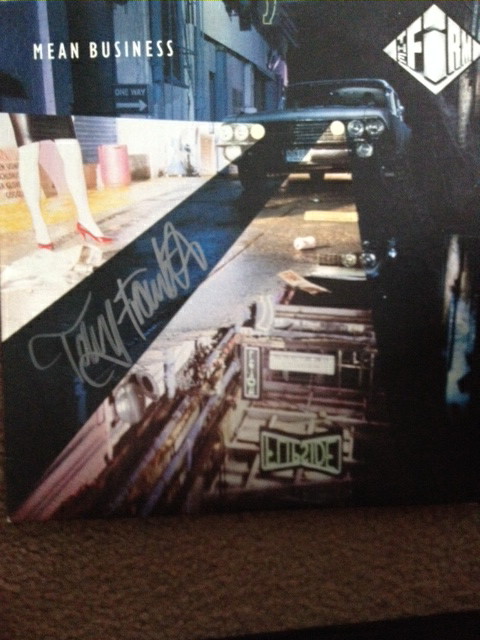 Fast forward a few hours and what a show.  Robert Randolph opened up and was great.  KWS Band came out and was awesome.  About the 4 song in the played SRV's "House is Rockin"  I kept looking at the keyboard player thinking, "man that looks like Stevie Ray's keyboardist".  Toward the end of the show Kenny introduced the band and it was Reese Wynans- SRV's keyboardist who was a member of Double Trouble and played on the "In Step" lp.  I happened to bring that CD cover for Chris to sign, now I was hoping to get Reese on it too. After the show, one by one each band member came out and signed and took pictures for the fans who were waiting.  There were about 15 or so people and everyone got what ever they wanted signed.  The whole band was nice and talkative.  This is how all bands should be.  What a class bunch of guys.  I asked Noah after the show if they ever thought about playing any Firm songs.  I said he would tear up "Satisfaction Guaranteed" or really anything Paul Rodgers sings.  He looked at me, smiled and said they had never done that but that wasn't a bad idea.  So who knows,  maybe a little Firm or Bad Co. might be in the set list! 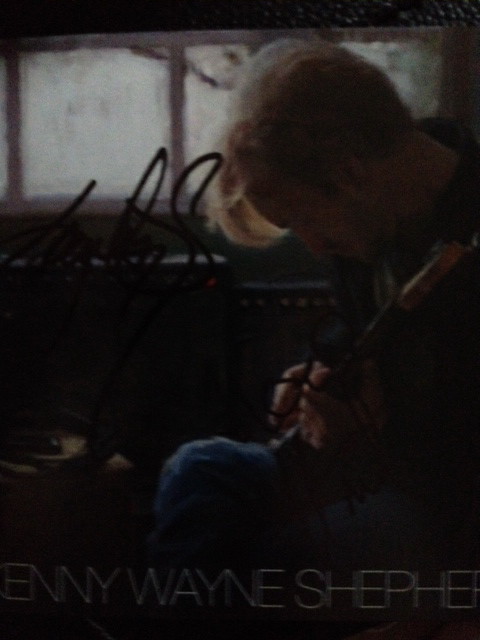 Nice to hear some people still appreciate their fans.

That's a fantastic double bill...although the order might well be reversed.

As I mentioned when you posted the photo, Noah Hunt is the best singer no one ever heard of. The guy should be a star in his own right.

Reese Wynans also holds the distinction of effectively being booted out of the band that became the Allman Brothers when Gregg came back from the west coast to join.

And...a rather sad commentary on the state of music today.  Last year I walked into a Barnes & Noble in NYC at mid-day because Kenny Wayne Shepherd, Stephen Stills and Barry Goldberg were there to sign their new CD as The Rides. There were a TOTAL of 22 people there to see them.  So they signed a lot more.  Mostly Stephen Stills signing CS&N items.

Wow, I would have loved to get Stephen.  He played the same venue a couple of years ago, but I was with a buddy and he didn't want to wait around to try and meet him.  I agree, Noah has a tremendous voice.  And yes, Robert Randolph opened up.  It was a great double bill... can't beat it for 40 bucks!