I've been a fan of Cheap Trick since about 1982.  I remember hearing some of their popular songs on the radio before that, but I believe that is when I bought Live at Budodan on cassette.  After that, I was hooked.  Then we finally got MTV and watching their live performances and some of their crazy video's made it even better.  I continued to buy their albums:  Dream Police, Next Position Please and One on One.  Finally I got to see them live in 1985.  They opened up for Heart and the next year they opened up for Loverboy.  Their sets were pretty short but tight.  I didn't understand why they were opening up, when they should have been the headliner.  Well, 2 years later I got my wish.  They were headlining a small club in Canton, OH.  I decided to take the short trip down and I snuck in a small disc camera (remember those?!). I wasn't disappointed in the show and in those days, I was just happy seeing the band not worrying about trying to meet them let alone get autographs. 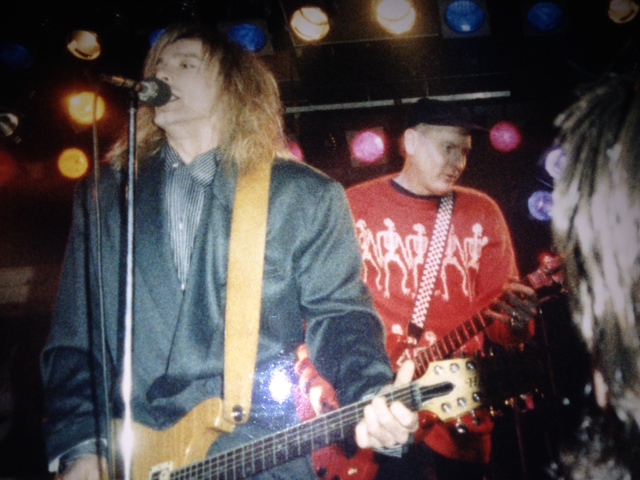 (March 2, 1988. This was right before The Flame was released and then they blew up, again)

Much to my surprise, I got to see them again as they headlined a show at Kent State my freshman year.  Another great show.  I would go on and see them a few more times through out the years both opening and headlining.  As it turns out, Cheap Trick was also one of my wife's (then girlfriend) favorite bands.  So we saw them together a few times when they came to town in the 90's.  As anyone knows, if you are anywhere close to the stage, your odds of getting a guitar pick are pretty good as Rick throws out about 100 per show.  And we have both gotten picks from different shows.  After one of the shows in '97,  we decide to wait after the show to see if we can meet them.  The club was small and there was really only one way in (the back of the club was on the lake), so we figured they had to come out the same way.  Robin Zander comes out and is waiting for his ride.  While waiting, my wife got him to sign her ticket stub.  I had nothing for him.  Rick, Bun and Tom come out, wave to the fans and get right in their cars.  I thought it was cool to say that we at least saw the band and I got to shake Robin Zander's hand.  He is not a very big person.

Fast forward 17 years and two kids later.  I decide to surprise my wife with an early birthday present and get Cheap Trick tickets.  I thought I got the meet and greet package but apparently I just got the merch package because I never got the passes, but that's a whole different story.  Anyway, we were in the 7th row and again they did not disappoint.  The only major drawback is that Bun E. Carlos is no longer the drummer.  Rick's son did a great job, but I would have liked to see the original lineup.  Great show, Robin has not lost a thing vocally, Rick still runs around the stage, changing guitars every song, and Tom plays a steady bass and even sang "I know what I want".  My wife and I both got guitar picks from Rick. 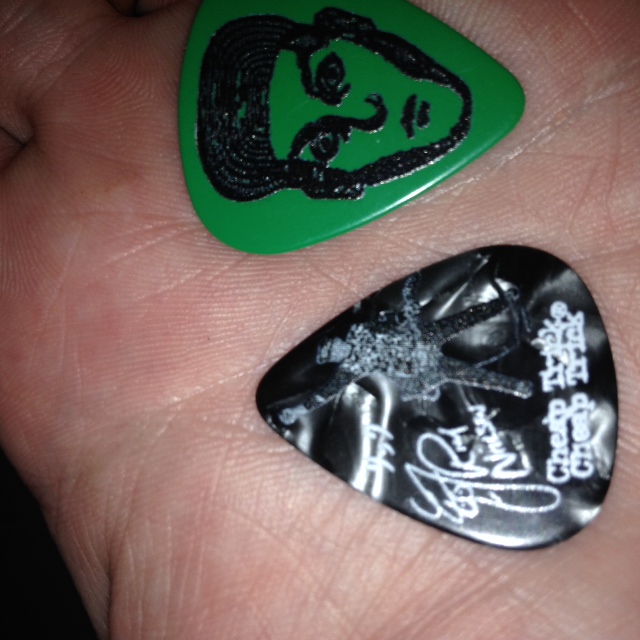 Thinking that we were going to meet the band, I decided to get something unique to have Rick sign.  Instead of the usual album cover or photo, I came across a web site that makes mini replica guitars.  I decided to get the mini Uncle Dick (the one that looks like Rick), and to bring a couple of albums just  in case.

Once I was told that I didn't have the meet and greet, I went back to my car to drop the items off.  I told my wife after the show, I'm going to where the buses are to see if I can meet them.  After the show, I get my items and head over.  There is one other person there.  Not too bad.  Robin comes out and waves and gets on the bus.  About 10 minutes later a few more people gather around and Tom comes out.  Comes over and takes pictures and signs what ever any one had.  I got my Dream Police and In Color LP's signed.  He couldn't be more nice.  I text my wife (who was in the casino) to come out.  She does and a few minutes later out comes Rick.  He was joking around and signing stuff and taking pictures with people.  I got my guitar signed and Dream Police LP.  My wife got her picture taken with him.  So over all it was a pretty good night.  Glad I didn't pay for the meet and greet when I got to meet them for free, minus Robin Zander.  One day, hopefully soon, this under-rated band will get into the Rock N Roll Hall of Fame. 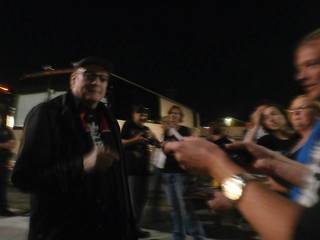 Great story! I've seen then a few times over the years and they always put on a great show. The only one I ever met was Bun at the NAMM convention maybe 10-15 years ago, but I've seen that Robin comes around our area (New York City) and signs at b-movie conventions from time to time, so maybe you could complete your collection at a con sometime. How big is that mini replica guitar? That's pretty wild!

Thanks!  I'll try to get Robin the next time they come around.  The guitar is about 12 inches long.

About ten years we saw Cheap Trick with Alice Cooper.  It was awesome.  Both bands get together at the end and sang together.

Thanks for sharing your tale. I live all the way over in Ireland and the mighty Tricksters have played here twice and I got to see them, once with Bun E on the Silver tour and got my Budokan album signed courtesy of a friendly manager at the venue. Unfortunately my pens let me down ( I posted a piece about it on this site- When Pens let you down') on that night. Next time they played Dublin my brother and I got a pic with Rick! And even though I missed Bun E as part of the line up, Rick's son does not disappoint!Love the signed mini guitar

One of the all time greatest ever bands!

I love Cheap Trick (although they don't deserve to be in the Hall of Fame...don't get me started on that debate!)

Have seen them and met them many times. I'll write the story and post it when I get time.