I saw Slash last night at the Hard Rock Rockcino.  It was a great show and Miles Kennedy has a great voice.  He played a lot of Guns N Roses classics like: Night train, Rocket Queen w/extended solo, Sweet Child O Mine and Paradise City.  He also played Slither by Velvet Revolver and a bunch of solo stuff.  Of course I brought a few items in case he signed after the show.

When the show was over I went to where the buses park.  There were a couple of other guys there but this time there were barriers up on the sidewalk to the buses.  I thought, this could be good or this could be bad.  About 15 minutes after the show, a woman came out and told us he would be about another hour.  We said, no problem.  Soon, there were about 40 other people there with all kinds of things to get signed.  G N R albums, guitars, pick guards, huge posters, one guy even had a framed gold record (with the glass removed).  We were all talking- telling various collectors stories.  Low and behold about an hour later, Slash's security guy comes over and tells us "Ok, Slash is coming out and will sign for you.  You need to form a single file line, one item per person, no pictures.  Have your item out, get it signed and be on your way.  If anyone does not follow these rules, Slash is getting on the bus and everyone will be pissed at you."  Cool, I can handle those rules!

Slash comes out and is very gracious.  He said, "man, there are a lot of you still out here."  I said, "Thanks for playing Rocket Queen, that's one of my favorites".  He said, "Hey, no problem", then took my gold marker and signed my Appetite for Destruction lp.  I was pretty happy.  Another guy that gets it, someone that is willing to give back to his fans.  Now, trying to get Axl or Izzy, Duff or Steven is going to be my next challenge! Cool story.  Always good to hear a positive experience like this.

Comment by Brian Burger on July 24, 2014 at 6:02pm
Good luck getting Axl to sign the album after Slash I hear he won't sign anything with Slash on it first as he hates him. Nice piece though! Very cool!

Thanks!  I heard that about Axl.  If he signs the lp first it's ok, but if Slash signs it first he won't sign it after.  What kind of thinking is that?  Like people wouldn't try to get Slash on a G n R piece that Axl has signed.

I have an update.  The Alternative Press held their awards in Cleveland on Monday after Slash's show and he was going to be given an award.  I thought nothing of it, besides Slash and Joan Jett- there were a bunch of bands I don't really know.  However I got a text from a friend that Joe Perry from Aerosmith was there too.  So I decided to bring a few things up to see if I could meet him.  No such luck, I never saw him.  However, I did get to see Slash again coming in and out of the hotel.  He stopped to sign both times!  So I got him on my RnR HOF poster and a mini guitar.  3 Slash auto's in 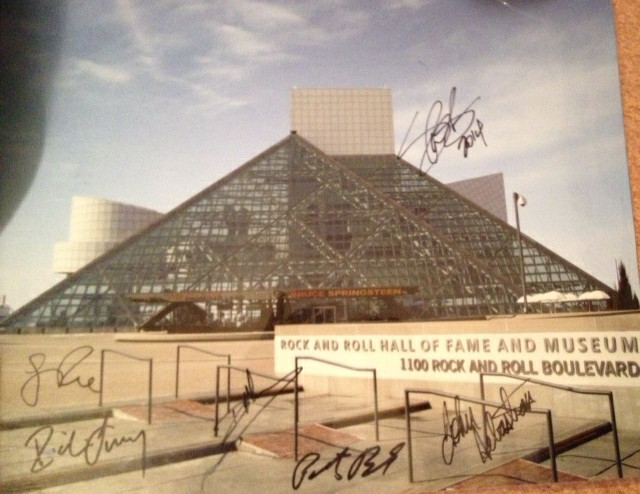 Here is the mini guitar.

Cool story. My friend was at a party at his house a few weeks ago in the Hollywood Hills. He said he didn't want to ask for an autograph, because he would've been the only one at the party doing that...hahahaha.