My summer of rock

I have been collecting sports autographs since about 1996, when the Indians were making their incredible run but not winning the World Series.  I met Omar Visquel and Carlos Baerga after a game and I was hooked.  I then started going to the Football HOF in '99 and have been going ever since.  I have met almost every living football hof'er, most Heisman winners and have gotten their autographs, some free and some I've paid for at shows and the old tent sessions.  (What a deal that was- 10-14 HOFers on any item for $75).  Anyway, over the years I've shied away from baseball and concentrated on football and have built up a decent collection.  It's still fun and I have a couple of pieces that I'm working on but I've turned my attention to something else.

Another thing that I'm a fan of is live music.  The first concert I saw was the J.Giles Band in 1982 during the summer going into 7th grade.  Over the years I have seen everyone from AC/DC to ZZ Top.  However, I never thought about trying to meet the guys in person.  I would go to the show and go home.  Once a small local club opened up,  artists like Eddie Money said that they would be signing out in the lobby after the show.  Well, of course I didn't bring anything with me that night when I saw Eddie Money.  I learned my lesson.  If I'm going to a show there, I would try to find some old vinyl so they could sign.  Then last year, a Hard Rock Live opened up about 1/2 hour away and they have been bringing in some decent acts. So this year, I decided to make this the summer of rock.  If I was going to a show, I would try to meet the bands and get them to sign some things.  Even if I didn't go to a show, I might try to hang out after the show to try and meet the guys.  So far, so good.  I already posted about Kenny Wayne Shepherd, Cheap Trick and Slash.  However, my summer actually started with Dave Mason (great concert, great guitarist), John Sebastian (he didn't play Welcome Back!).  Then I saw Jefferson Starship (only 2 original members but Paul Kantner is in the HOF), and Donnie Iris (still has the pipes!)  I didn't see Yes, but decided to go up after the show to see what would happen.  All of the guys were great except Alan White- he got right in the van.  2 Yes lp's and

and an Asia lp which Steve Howe laughed and said "Asia, I was in that band".  But not anymore.

The Happy Together came to town featuring The Turtles, Mark Farner, Chuck Negron, Mitch Ryder and Gary Lewis- but he cancelled.  Flo and Eddie or Mark and Howard (real names) were great and signed for the 3 people that were there.  Chuck Negron ignored us, Mark Farner went to the van, but Mitch Ryder called me over to his bus and was great.  So I got 3 out of 5 guys. By going to these shows, you end up seeing some of the same people.  Some are great, and some are jerks.  I ended up making friends with a couple of guys who have given me some tips.  The best one came yesterday when a buddy told me where Alice Cooper was staying.  He and Motley Crue were playing a big venue but still not too far from my house.  Another buddy and I decide to go up to the hotel.  About 10:30 here comes the tour bus.  Sweet we thought, were going to get Alice.  The band comes off the bus but no Alice.  What the heck.  I wait another hour and think it's not going to happen.  I was just about to leave and here comes a Dodge Charger (I think) and out comes Alice and his wife.  He was awesome, taking pictures and signing for the 3 other people that were there.  I couldn't believe that I almost left.

So far the summer of rock has been great.  I am going to Survivor and Buddy Guy this weekend and we'll see how it goes.  Then it's back to school (I teach and coach) and I will have to slow down, but I will always keep rockin'. 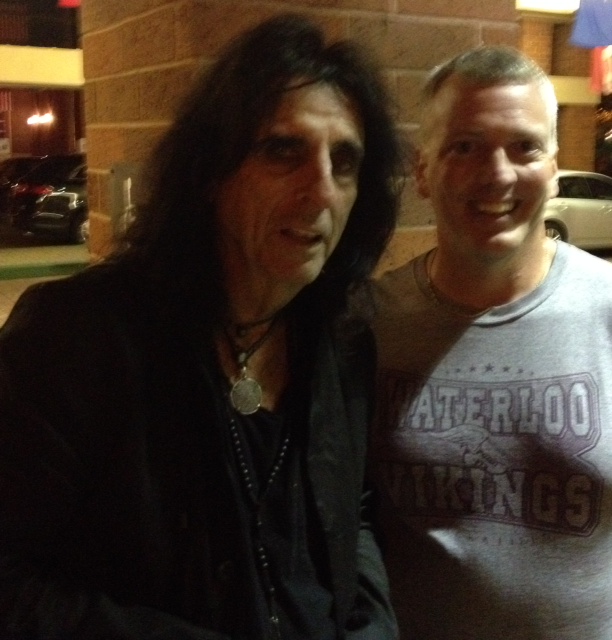 Thanks for sharing. I started with sports then got into music and entertainment also.

Comment by Steve Zarelli on August 14, 2014 at 4:42pm
Thanks for posting. In general, are results better before or after a show?

In my case it would be after but sometimes quite a wait.

One of these artist are Tracy Chapman. So it all depends on the artist and the venue.

For me, the best results have been after the show at these smaller venues.

Here are a couple more lp's I got signed this summer. Sounds like fun! My Summer Concert Series was 4 shows in 28 days. Kicked it off with 3rd row for Ringo @ the Santa Barbara Bowl. Did a meet and greet with No pics and No autographs. Then Boston at the Forum. Could care less about Tom Scholz, but they Rocked the Forum. Then Back stage Opening night for Tom Petty in San Diego. My buddy is friends with a Heartbreaker so we are always back stage with those guys. I would never dream about asking Tom Petty or Mike Campbell for an autograph or even a pic 20-30 minutes before a show. NEVER would embarrass my buddy or myself. Act like you've been there. Then the Finale was Paul McCartney at Dodger Stadium. Only 7th Row for that debacle. That's all I've done. An autograph never crossed my mind, but an 80's flashback did. Now, Only have 2 more Tom Petty shows to go to in October. I can bet there will be NO autographs, but plenty of Rockin'.

Yes, it is Squire and Howe.  I'm not sure about Anderson, he no longer tours with them.  Maybe once they get in the HOF he will do something with them again.

It would be very cool to hang out backstage w/Tom Petty.  He's one of my favorites but has missed Cleveland the past 2 tours.   I get not asking for an autograph, but there is nothing wrong getting a picture taken with the band.

Comment by Steve Zarelli on August 15, 2014 at 6:57pm
I see Tom Petty every time he comes around to Saratoga, which is about every tour. For whatever reason, he is skipping it this year. :-( I don't have Fudd-like juice sadly... I have to sit with the riff-raff and no back stage. Lol