I had to give this one its own thread.

It's a Mickey Mantle forgery on a baseball with the inscription "536 Hrs."

This Mickey Mantle forgery is listed by EBay seller rraandy.

With two hours to go, the bidding is up to $399.00 for this ugly and horrific Mickey Mantle forgery listed by Ebay seller rraandy. 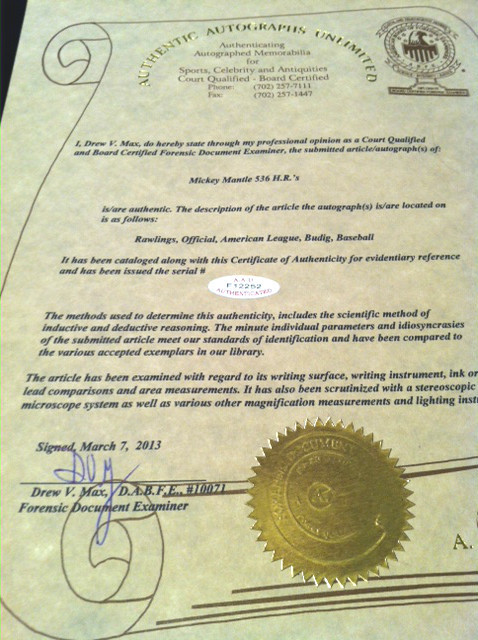 Comment by Ryan on March 22, 2013 at 8:38pm
I pray this gets removed before some poor naive soul gets ripped off. eBay seller rraandy sounds familiar, I feel like we've exposed a forgery he's listed before.

That forgery really sux,,, whoever signed it is a terrible forger.

and look who "Authenticated" it. Everybody's buddy in the signature business.

MY BUDDY DREW SAYS IT'S REAL, SO I HAVE TO GO WITH HIM ON IT.

Ebay seller rraandy is selling yet another Mickey Mantle forgery (with a COA from Drew Max).

Different Mickey Mantle forgery than the first one he sold, but with the same inscription. 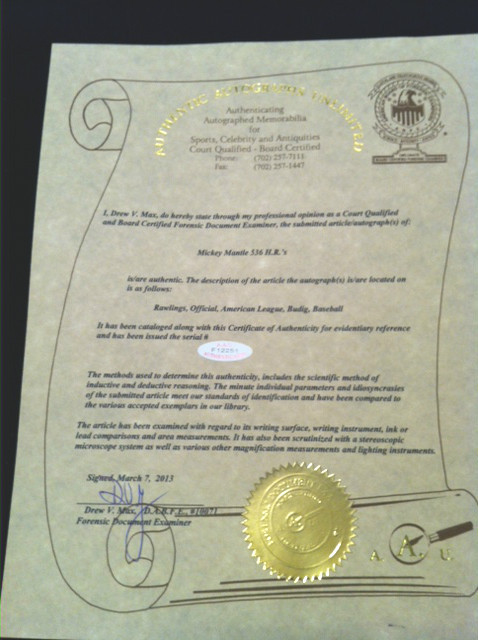 Sold for almost $400.....I hope the buyer comes to this site and finds out.  You could buy a real Mick for cheaper if not the same price..

Wow, i am not experienced really at all with Mickey, and i can see how slow and sloppy each of the Ms are. I would think that anyone could. In this kinda case, for that kinda money, you really just have to blame the buyer as much as the forger. And then their is Drew Max. What can you really say... he is on par with Chris Morales. Pawn Stars continues to do a disservice to its viewers (as if they cared) by allowing Drew Max to advertise his service. People see and hear his name and that get lulled into believing he isnt the incompetent forgers best friend that he is.

And i know that Pawn Stars has been contacted many times about him. And they dont care. Autograph Authentication, i guarantee you is not something they care about. As long as it gets sold, its okay. Just like that stupid Tru TV pawn show. You can walk in with the worst fake in history, and as long as it has a COA, the owners stupid offspring will buy it. And then pass it onto eveyone else without even thinking about checking on where the COA came from. Its so easy, it almost makes you want to buy a ton of crap off coaches corner, get them certed by Max or Morales and then walk into these pawn shops and get good quick money, with no questions. But thats what seperates those with morals, from those that dont.

People who watch these shows and see people like Max and then give him credibility are being hugely naive and foolish. I remember when some moron not to long ago tried to argue his forgeries he was selling on ebay by stating that they came with COAs from Drew Max, "the pawn stars guy", so they must be real. He argued and argued, until he even was forced to admit that Max was certing any autograph and every autograph. But then did an about face at the end, and claimed they were still good.

Bottom line, i hate this reality shows that advertise services they know nothing about, and i despise Drew Max, and Chris Morales, the forgers best friends.