Musicians signing in September. Some yes, some no, some disappear.

September has been a pretty good month for adding to the collection.  Things started to slow down in Northeast Ohio, but I still managed to get a few good ones.

Todd Rundgren made his 5th appearance in Northern Ohio in the past 12 months.  Apparently he has a pretty big fan base here.  Believe it or not- he is playing again in December.  I think people were disappointed with his “Global” tour as he basically played techno music and he only played a few of his hits.  So in September, he and the Akron Symphonic Orchestra played 2 different sets on two nights just to mix it up.  I saw Todd last fall and he was very good.  I waited for him 90 minutes in the cold, along with 30 other fans, to be told that he had already left.  Tried for him this summer and they snuck him in the venue.  I almost didn’t try, but I decided what the heck.  After the first show in Akron, he came out, took a couple of pictures with a couple of fans and signed 2 for my friend.  I was next, and I politely asked if he would sign one for me.  He said “No, I have to go to dinner.”  I couldn’t believe it!  I was 2 feet from him and he told me no.  I was the only one there with an album.  Very upsetting.

The next night, I contemplated going or not.  I figured, if he says no- I will never try for him again and my albums will remain unsigned.  So I went and he came out and there were 5 of us there so we approached him.  Security told us to get back to the sidewalk.  I didn’t think it was going to happen and I would end up 0-5 in my attempts for Todd.  However, as he was leaving, he rolled down his window and said “OK, I will sign one each.”  Cool, I was finally getting him!  He signed for the five of us then he said “Does anyone want a pic?”  I said “sure, I’ll take a guitar pic.”  He said “No, I mean a picture with me.”  I was kind of embarrassed but said sure, and the 5 of us all got a picture with Todd.  Persistence pays off!  Now, if I can get my other album signed in December…. 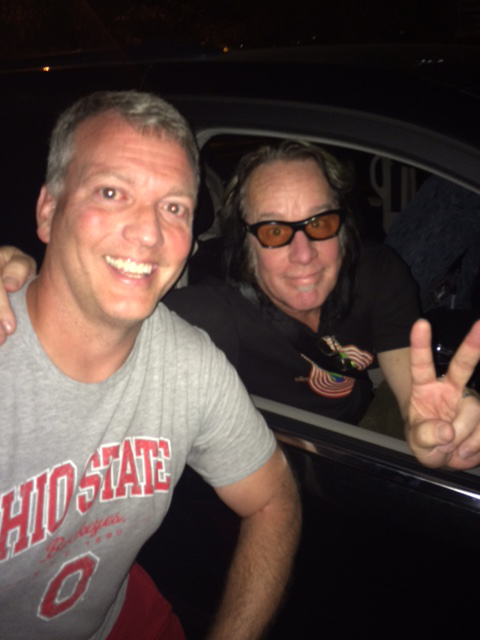 The next show was Salt N Pepa.  I have never been to a hip hop show but I like these old school rappers and I got approved to shoot it, so what the heck.  I found an old album at my local record store (believe it or not, they still exist!) and decided to try for them after the show.  And what a FUN show it was.  If you want to have a party and dance, I recommend going to see them!  Unfortunately it was a rainy evening and by the time I made my way back, they were all ready gone.  Oh well.

Two nights later, I was approved to shoot Buckcherry.  I really dig this band as they are one of the few true rock and roll bands out there.  They put on a great show and said that they would be signing cd’s after the show.  They actually had some vinyl at the merch table as well as cd’s and strangely; some adult toys (never saw that at a merch table).  I decided to go for the vinyl. After about 45 minutes, the entire band came out and sat at the tables to sign for the fans.  As long as you bought something, they would sign it.  They were all a bunch of nice guys, very down to earth and friendly.

Next up was the long waited return of the J. Geils Band to Cleveland.  It was a sold out show and they were the first band that I ever saw in concert back in 1982.  I would have been great to get the 4 original members on my Love Stinks album.  I had a feeling that when they were done, they were going to do a mic drop and head for the buses.  So my friend and I made a b-line for the exit during the last song.  As we made our way to the back, Magic Dick, Peter Wolf and Denny Klein were standing out back having a smoke.  I was right! There were only 2 of us at the time so we asked Peter if he could sign, he said that he would come back out as he headed toward his bus.  Magic Dick totally ignored us as he headed to the bus and Danny Klein said that he too would come back out after he headed for the bus.

Only one of them was true to their word, and it wasn’t Mr. Wolf.  Danny came over to the 6 fans that were waiting and signed anything they had and took pictures with them as well.  A total class act! Finally, Joe Walsh decided to start his tour in Warren, Ohio.  Ohio has become his adopted home as he did attend Kent State (my alma mater) in the 1960’s.  I decided to try for Joe after sound check on his first show (he played on Wed. and Fri.)  There were only 4 of us there and I asked Joe if he would sign.  He said “Ok, I will sign one each for you guys.”  He was very cool.  I had a decision to make- get him on an album or my Hall of Fame poster?  I went with the poster.  The only reason I did, was because I knew I was going to get him on Friday guaranteed.

What was the guarantee, you may ask?

Believe it or not, a week before the show, a local record store in Niles, Ohio announced that Joe was going to be doing a signing in the store!  Holy crap, what year IS this—1985?  An actual in-store signing by a musician, I couldn’t believe it!  It didn’t hurt that this was the same store that had the Foo Fighters play at this year on Record Store Day.  The only thing he wouldn’t sign were guitars or pick guards.  Everything else was fair game- even Eagles albums, which he has shied away from signing in recent years. The signing was at 1 pm so I had to take a personal day from work.  I also managed to bring someone else with me so I could get another album signed.  Because it wasn’t well advertised and it was in the middle of the afternoon, only about 120 people showed up.

I ended up getting my Hotel California lp signed that I got Don Felder on earlier this year.  I also got The Smoker you Drink and There Goes the Neighborhood.  As a bonus, if you were one of the first 40 that bought a Joe Walsh album or cd from the store, they gave you a signed poster that they had made for the event.  So I bought Analog Man and got my poster too.   Joe’s wife sat with him at the table and handed out black rubber bracelets that said “Joe Walsh Toor” to every fan that met Joe.  How cool!

As we were towards the front of the line, I figured I might have time to get back in line to try and get Analog Man signed too.  I was about 5 people from Joe when the manager announced that if you were already in line once, you had to get out so everyone could get there items signed.  Now, I wasn’t the only one who tried to double dip, and they didn’t say that that wasn’t allowed once the signing started.  So I ignored the request after I waited another 20 minutes in line and was almost to the front.  Because I had a conversation with the owner earlier, I guess he recognized me and asked me to leave.  I said, but I bought this album here and I just want that signed as well.  He said if I let you, I have to let everyone.  I understood and quietly left the store with the 4 others that they noticed.  However, they didn’t notice my partner or a few others that went through twice.  I played it cool in case this store decides to have another artist in for a signing!

So in two days I got 5 Joe Walsh autographs which is a pretty good get.  I heard that Joe signed after sound check again on Friday but headed straight for the bus once the show was over.  The show itself was good, but I wish he would have played longer, only 13 songs!! I would have never thought that I would get two Eagles members at all, let alone in the same summer!  Now only if Don Henley did an in-store appearance……

Great Blog Coach! Salt N Pepa are hitting here in November with Vanilla Ice and the 2 Live Crew so I might try. Rundgren was pretty cool here signed everything and took pictures with every one. I hope Walsh comes here that would awesome.

Fun stories. I've gotten Walsh so many times. I'm a huge fan. Never tried for J. Geils Band, but I love them (here's a fun fact for y'all: The J. Geils Band Touring has ALL the original members, EXCEPT...J. Geils!!!!)