Rockers and a Hollywood Actor who wants to rock

Summer is winding down and school is about to start but I do have a few autograph stories from the past couple of weeks.

First off, Rock and Roll Hall of Famer, Chris Hillman (Byrds,Desert Rose Band, Flying Burrito Bros.) and Herb Peterson(Flying Burrito Bros, DRB) made a stop at a small local venue.  After the show they both sat down at the merch table and signed and talked with fans.  I couldn’t find my Byrds album (that Roger McGuinn refused to sign) but I did get him on my HOF poster and the Souther, Hillman, Furay lp.  I just need Richie Furay to complete it (he cancelled a show here in June).  I asked if I could get a picture with Chris and he said “Sure, I’m easily accessible!”  I like it when artists are down to earth and appreciate their fans. 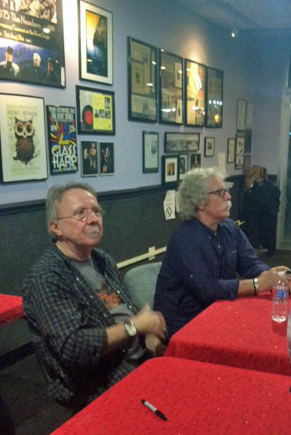 The 2nd act that came to town was Chicago.  They played a solo show at the Hard Rock rather than with their current touring buddies Earth, Wind and Fire.  After the show, there were about 6 fans waiting for the band to come to their busses.  Richard Lamm was the first to exit and instead of going on the bus, he was headed to a private car.  This meant he had to go right by the fans.  We asked if he would sign and he reluctantly said yes.  At that time there were only 4 of us.  He signed my album but did not sign the set list.  My one friend got him on a drum head and their new cd and he signed 1 each for the other 2 fans.  I heard he has been difficult, so I was happy to get him.  The rest of the band came out one by one and they all came over to sign except one guy.  I ended up getting 8 of the 9 guys on the greatest hits album that I brought (even though they didn’t all play on those songs), and 7 of the 9 on the set list.  My friend got everyone on the drum head but the one guy (sax player?) that went right to the bus.  He asked the tour manager if he could take it on the bus to have him sign it, and he did.   It turned out to be a great night. The next night, Billy Bob Thornton and his band the Boxmasters played the same small venue as Chris Hillman.  This is the third year in a row that this venue has brought in a Hollywood actor to play with their band.  First was Kevin Costner, last year was Kevin Bacon and this year was Billy Bob.  Fortunately I have been able to get all 3 to sign a movie poster.  After the show, Billy Bob and one of his band mates were signing stuff at the merch table.  He has to be one of the nicest, most accommodating “stars” that I have ever met.  He had conversations with people, signed whatever you had and happily posed for pictures.  I ended up getting a Friday Night Lights poster signed, I couldn’t find a Sling Blade poster. Finally, ZZ Top played the Hard Rock Rocksino (that’s what they call it here in Ohio).  It was another great show from that Little ‘Ol Band from Texas.  I haven’t seen them in 25 years and they still sound and play great!  I wish they would have played a little longer with more original songs rather than a couple of covers that they played, but it was still good. About 10 fans waited by their buses to try and get an autograph.  Frank was the first to come out and went straight to his bus.  I heard he signed one earlier in the day for the only guy that was waiting.  Dusty Hill was next and he happily came over and talked with the fans and signed everything for everyone that was there.  I got my Eliminator lp and HOF poster signed, I wish I would have brought more!  We were hoping that Billy would have been as nice, but that wasn’t the case.  He took a few guests to his bus, played some loud music for them and then they all came off the bus.  He took some pictures with them and signed a few items.  We thought he would come over and do the same for us.  To our disappointment, he went back on the bus and never came off again.  I guess it’s near impossible to get all three of these guys in one place.  I don’t get it.

However a band that does get it is Blackberry Smoke.  They opened up the show for ZZ Top and played their style of Southern-fried rock.  I thought they were very good.  After the show, all of the band members were hanging out by the buses.  All of them signed and took pictures if you wanted.  I ended up getting a drum head signed by the entire band.  They were all very cool.  If you like southern rock like the Black Crowes, Molly Hatchet or the Allman Brothers then you should check these guys out. 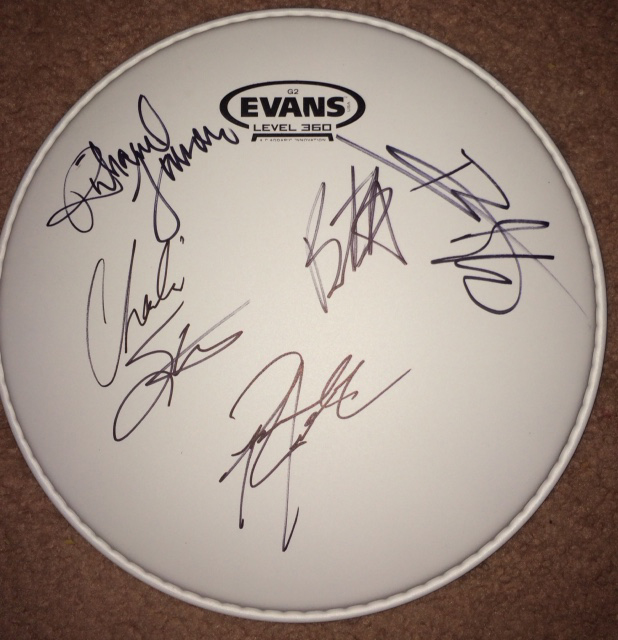 Comment by Adam Halloran on August 29, 2015 at 8:45pm
You never get worried that the HOF poster will get ripped when taking it out? I would be so nervous!

I have that Hillman Furay album....but was sick when one of them came to town. Then when the other came to town, I didn't want to get it signed by him, knowing it could've been signed by the other!! Also....Roger McGuinn has turned me down twice! I'll never ask him again (fun fact though: he sells his signed CDs at the merch booth his wife runs, and at $20 or $25 a CD .... can't remember the price...I'm fine with that; he's still a jerk, though

Adam- yes I do get worried about taking it out of the sleeve.  The corners are getting a little dinged but once it's framed, you won't be able to tell.  I'm not sure when I'll stop adding names.  I know Gladys Knight and the O'Jays are coming to Cleveland in October.  I wouldn't mind putting her, Eddie Levert and Walter Williams on there.

Josh- Yeah, I saw that he sold signed stuff when I went to his show.  It's nice that he does that, but I would rather get him on the items that I want.  That's just me being picky.

I hear it's near impossible to get all three members of ZZ Top and I wouldn't bother buying the expensive meet and greet either because I hear they don't sign during the meet and greet just a handshake and photo with is what I've been told.