My Heart/Robert Plant situation and other stories Heart is one of my favorite bands.  I’ve seen them a few times in the past, but it has been 20 years since I last saw them so I was excited to see that they were playing at the Hard Rock Rocksino.  I jumped on Ticketmaster as soon as tickets went on sale and I scored 2nd row seats.

My buddy asked me if I was interested in seeing Robert Plant.  I said sure, I saw him back in ’88 when Stevie Ray Vaughan opened up for him (what a show).  He said that his best friend from high school is a truck driver and he is the guy who is driving the Plant tour- it was only a 1 truck tour.  The closest place he was playing to us was Detroit.  So if we made the trip up, he could get us backstage passes.  Holy crap, I could possibly meet one of the true legends in Rock.  I said, heck yeah- let’s go!  My buddy said there’s one problem, it’s the same night as Heart.  To me, it was a no brainer- Heart tours all the time, so I decided to sell my ticket.

About 3 days before the show, we get word that Robert Plant has some throat problems and he had to cancel some shows- including Detroit.  Crap!  Now I’m not seeing Robert or Heart- it was sold out.  Well, the day of the show I decided to take a look on Craigslist and found a ticket- 3rd row at face value- I’ll take it!

It was a very good show- Ann can still belt them out!  But it was a little short, about 70 minutes.  I had heard that Ann and Nancy are very difficult signers but I figured I would try anyway after the show.  Their guitarist came over and signed and took pictures with people, but when Ann came out she gave a wave and went on one bus then Nancy came out, waved and went on another bus.   At least I made it to the show.

While the Plant tour was delayed, my buddy saw his friend and gave him a few Robert Plant solo records (I heard he doesn’t like signing Zeppelin things) to see if he could get them signed for us.  The tour resumed for 3 more shows and then he was done driving and had a break until the Idina Manzel tour started up.  When he came home, he brought all 6 albums signed!  He kept 1, my buddy kept 3 and I got 2.  I was more than happy to have my Honey Drippers and Shaken and Stirred signed. 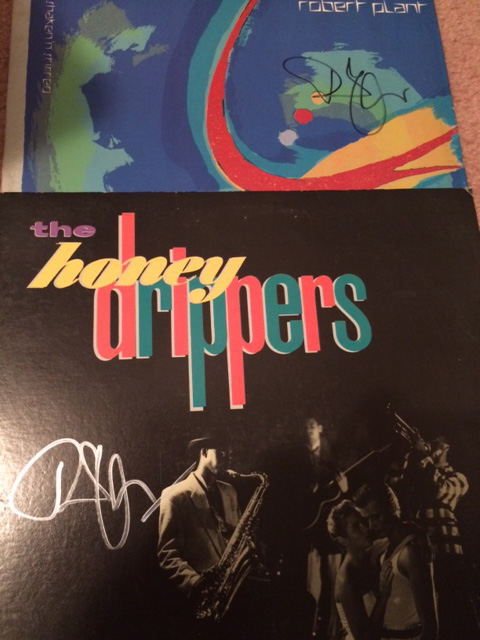 So, it was a win-win for me.  I got to see Heart and got 2 Plant albums signed.  I guess we have two tickets to the Detroit show, but it’s in September and I don’t think I can make it to Detroit when school is in session.

Whitesnake played the Rocksino and my buddy shot the show.  He went out back during the encore to try to get David Coverdale.  I guess the bus pulled up, and as soon as the song was over Coverdale left the stage and went right to the bus.  The manager told my friend that David never signs after a show, but will before the show.  I made my way out to the back, where there were still busses.  Each band member- Tommy Aldridge, Reb Beach, Joel Holkstra and Michele Lupi and Michael Devin as well as the opening band, The Answer were more than happy to come out and meet and sign for the fans.  Those guys were awesome. Next, I got to interview and then shoot/review Nils Lofgren.  What a great, down to earth guy.  Nils put on a great show, playing everything from a harp, to the guitar and the keyboards.  He told the audience that he would meet people at the merch table and sign stuff after the show.  I got my HOF poster signed as well as a solo lp and Springsteen’s Tunnel of Love. Sheila E, the 80’s 2 hit wonder and Prince protégé, was doing a book signing.  Since I kinda had a thing for her back in the day, I figured I would go and meet her.  She gave a short talk and answered questions from the audience then started her signing.  She came out to the front of the table so people could take pictures with her.  I happened to bring her two solo albums and asked if she would sign them as well as the book.  She was happy to oblige.  One interesting thing that she said, and it’s also in her book, is that she writes backwards.  Just like Leonardo DaVinci.  Her signature looks like a scribble, but like my one friend says “it is what it is!” Finally, I decided to go see Huey Lewis and the News at the last minute.  Once again my buddy got approved to shoot the show and thanks to Craigslist, I got an 8th row seat at face value.  I last saw Huey back in ’84 during the Sports tour.  They still put on a good show, although Huey at times was a little pitchy, but he can still wail on the harmonica!

About 20 minutes after the show, Bill- the drummer and Huey came out to sign for the 20 or so fans that were waiting.  They were both very friendly and accommodating signing everything and taking pictures.  I ended up getting the Sports and Fore! albums signed by both.  I was surprised the other guys didn’t come over, but still it was awesome to meet Huey.  I would have never thought back in the 80’s that I would  meet some of these video icons. He took me “Back in Time” for sure!

The Football HOF inductions are coming up in a couple of weeks, so I'll switch it up from music and get back to a few football guys that I need.

Great story. Im sure with many of the tough signers its who you know.

Comment by Devon Laney on July 17, 2015 at 9:51am
GREAT post, Coach! Congrats on all the successes! That Honeydrippers album is beautiful. Thanks goodness your buddy knew to have him sign it in silver!

Thanks everyone.  I enjoy sharing my experiences.

I did want to mention that Huey came out with his own blue Sharpie.  I guess David Crosby hasn't gotten a hold of him yet!

Brian- that's awesome.  I would have gotten a We Are The World album too had I known I was going to meet 4 people that played on it this summer! (John Oates, Sheila, Huey and Bill Gibson)

Coach it's better not to get the album as it will never be completed because some of them are longer available for the chasing because they dead. I started doing this same thing with the metal equal "Stars"  put out by Ronnie Dio a while back and some of those individuals are no longer with us either. It is fun trying to get as many as possible though.