My Interview and Autograph with Gregg Allman -- RIP

I was never the biggest Allman Brothers fan. I thought Duane Allman played a mean slide guitar. And their long, Fillmore style jams were okay, but I probably would’ve liked them better if I played a musical instrument. When I worked in radio, they were good songs to play when you were on the air because it gave you time to go to the bathroom.

Gregg Allman had a solo song I loved called “I’m No Angel” which I thought was terrific. And I was thrilled that he often sat in with my cousins band “The Freewheelers” when they played in L.A.

When I found out he died today at 69...I thought about the singer/keyboardist of The Allman Brothers, and the Southern rock sound (I was always a much bigger fan of Lynyrd Skynyrd).

The last few years I had heard about Allman having health issues, including hepatitis C and liver issues. Just like with David Crosby, I always wondered why he was given a liver transplant when he ruined his due to his own excessive drug use, but that’s another debate for another time.

I was excited by the opportunity to interview Allman once in the early ‘90s. I was working at a classic rock radio stations, and our music director asked me if I’d go to the club he was playing and talk to him. It was a last minute gig, and the venue wanted to drum up some publicity. I was game. So, I went home to get the my “Eat a Peach” album for an autograph, and my tape recorder for the interview. In the few hours before the interview was to take place, his manager had sent two faxes (remember those?). They had the topics I was not to bring up to Allman. They included Cher. For those that don’t know, he was married to her for 8 days. She left him after she found out he did drugs. Geez, talk about not properly vetting your partner during the dating process. Although, she did marry him five days after the divorce from Sonny Bono, and after leaving him, would quickly start dating Gene Simmons. Perhaps her judgement of men is a bit off, but I digress.

The other topic I was told not to bring up was anything about his older brother Duane, who died in a motorcycle accident. There was also a story involving Gregg getting Duane busted for drugs, but I’m hazy on the details of that now. I also wasn’t allowed to bring up anything regarding his drug use. There were also a few voicemail messages left for me about those topics as well. It made me tempted to say something to Gregg like, “You’ve been making music since the ‘60s. Do you have any specific stories you’d like to ‘SHARE’ with the audience?” I didn't know at the time...that Gregg Allman shot himself in the foot in order to get out of the draft, or that his dad was shot and killed. The manager apparently didn't have a problem if I brought those topics up.

Anyway, as I was walking out the door of my place, my roommate had left one of his many Minnesota Vikings caps on the coffee table. I was having a bad hair day and I threw it on. I had no clue where my Lakers cap was, and didn’t want to wear my Doors cap. Never good form to interview a band while wearing something from another band.

When I walked into the venue and Allman came over to the table, he started freaking out with excitement. He asked me where I got the hat. It merely had the Viking logo, and as I was explaining, he said, “Can I have it?”

I laughed, thinking he was joking. He got in my face and said, ‘I’m serious, man. I have to have that hat.”

I told him it’s a Minnesota Vikings cap and you could buy it in most sports stores. I said, “Why do you want it so bad?”

He said, “Because the Vikings are my ancestors. Let me show you something.”

With that, he took off his shirt. His chest was covered with tattoos and he said, ‘Look at this.” He was pointing to his left nipple. As I was looking he said, “Get in closer.” So, I got to within an inch of his nipple, and there it was. A viking was tattooed near his nipple. He said, “What do you want for that hat. I’ll give you anything.” I glanced over at the stage. And saw his Hammond B-3 organ. I’m sure he wouldn’t give that up, but...I also saw five guitars. I figured I’d go for it. I said, “How about one of those guitars?” He said, “No. I can’t do that. They’re the guitarists. How about an Allman Brothers T-shirt?”

I laughed and said, “Sure.”

He ran off to get one, coming back five minutes later, only to tell me, “The merch guy isn’t here yet. I’ll give you one at the show tonight. You’re going to the show, right?”

I said yes, but that night, I was going to see The Black Crowes. They were fairly new, and I had seem them live a few times, and was a huge fan. I wasn’t about to tell him that, though. So, my roommate lost his hat, and I got nothing in the deal. The interview went well, but Allman was stoned off his ass. I remember at one point asking him if it’s frustrating to have a new record out and wanting to do a song from it...only to hear the crowd yell out for “Melissa” or “Whipping Post.”

He pointed to the ceiling, looking upwards.

As I started to ask my next question, I looking at him. He was still looking at the ceiling. He would be staring at it for another two minutes, before he asked me to repeat my last question.

After the interview, I asked for his autograph. He took my album and wrote “Thanks, Gregg Allman.” I got signed years later by Allman Brothers guitarist Dickey Betts.

I like to think he’s reunited with his brother and doing one of those long jams they made so famous on the Live at the Fillmore album. 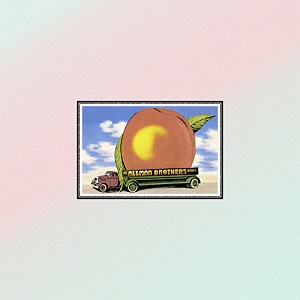 Great story!  I think I shared my story in a blog a few years ago about my experience w Gregg but I'll share again.  He was starting his tour in Cleveland and I had a feeling he would be doing rehearsal the day before the show.  My wife likes to play the slots, so she said she would ride up with me while I waited for Gregg.

Of course, I was the only one there on a cool March evening.  Security came out and said he might be awhile.  I said, I have nothing else to do, my wife is gambling.  About 15 minutes pass by and the manager comes out and said "What do you have?"  I said I had Gregg's book and I really would like it signed.  (I think it helped that I had his book) He said ok.  Then I said- I have an album too, do you think he could do that too?  He took them both back stage and came back a few minutes later with both items signed.  He inscribed the book "Thanks, Gregg Allman 2015" and the album with his name and year.

The manager said "He should be coming out in a few minutes if you want to meet him."  I said sure!  So he comes out, I shake his hand and thank him for signing my items and the great music.  I asked if we could take a quick picture and he said "No, I'm all bundled up."  Which he was, he had on a winter coat, scarf and hat for a 30 second walk to his bus.  Then went right on the bus.  At least I got 2 things signed but would have loved the pic.

Another legend is gone.  So long midnight rider.