What Do Willie Stargell and Barry White Have in Common? This morning I heard two stories that got me thinking, and now...blogging. First, singer Barry White’s son is suing his widow. She apparently spent all his money living a lavish lifestyle, and he had a trust that is no longer paying him. The other story was in the sports section. The family of baseball Hall of Famer Willie Stargell is fighting with his widow, because she’s auctioning his memorabilia. SCP Auctions Inc, will be auctioning off his World Series ring, and MVP award, among other things. Margaret Weller-Stargell is, of course, his second wife. His first wife Dolores, was married to the Pittsburgh Pirates first baseman from 1962 to 1983. She said she’s furious because they were never told about the auction and “completely blindsided.” What I always wonder when I hear something like this, because you hear about them a lot (remember the blog I did about Don Drysdale that was similar?)...would Dolores had liked it better if Margaret had called her and told her that in a few months she’d be auctioning off the items? Uh, I’m guessing no. She would be just as furious. The only thing that would’ve made her happy is if she called and offered to GIVE HER or the kids, any of those items. But had she just called to inform her, or told her she could buy any of the items at market value, again...she’d be furious. And it’s why famous people in any field...if they want to go marry a woman half their age...should just sign prenupts or give their kids valuable items they might want (or might want to sell for millions themselves decades after your death). An athlete must be really stupid to not realize that after a Hall of Fame career, their items are all worth a pretty penny.

Dolores has a handicapped daughter and a son that’s a Gulf War veteran that suffers from post-traumatic stress disorder. Among her other claims is that they’re living in poverty.

The kids have posted a message on Facebook claiming their dad would want his lifetime accomplishments on display and enjoyed by all, as opposed to sitting in someone’s basement collecting dust. I admit, that sounds like a strong argument. Although I’d also explain to them that...many, many, many kids of famous athletes were quick to sell their dads memorabilia to make a few bucks. It’s unlikely they want it just so it can be on the walls and shelves of their home. ESPECIALLY IF, as they claim, they’re living in poverty.

That reminded me of a time I was watching a big band perform a concert and the sax player collapsed on stage. They rushed him to a hospital, where it turns out, he died from a heart attack. The band, 45 minutes later, said they’d go on with the show, because “...that’s what he would’ve wanted.”

I got this imagine of a musician up in heaven, looking down, and screaming, “No I wouldn’t!!! Why not stop the show, and talk a bit about me to the crowd. Let them know about the songs I wrote, and a little about my life...instead of just going into a groovy version of ‘Sweet Georgia Brown’!”

The widow released a statement that said, “Willie made the decision years before his death that he wanted these items left to me because I know that he trusted me to do what was in the best interests of both a game that he loved, the Pirates organization and its fans that he honored and respected.” 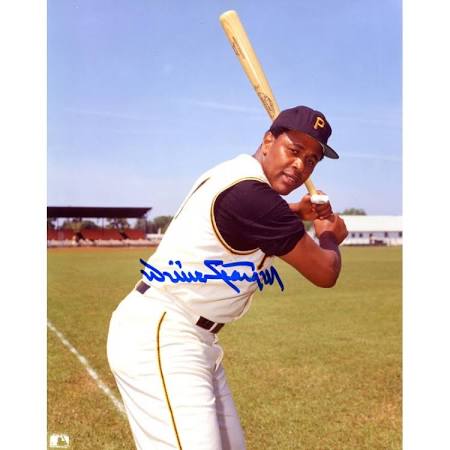 The widow was married to Stargell from 1993 until his death in 2001. So, it’s not like she just married him the last few years of his life when he was 90.

She’s also donating some of the proceeds to charity, including a dialysis unit at a hospital in North Carolina, as well as a kidney disease foundation that was started in her late husband’s name. Now I’m sure that’s something her husband would be behind.

So, all you Pittsburgh Pirates fans...start saving your money.

All you Pirates of the Caribbean fans...your latest movie opens this weekend.

The moral of the story should be you need a will that has all the specifics or you get this!