You know how I know I married the right woman? Well, on our wedding night, she let me….oh come on! This is a family blog. And it’s about autographs. Here’s how I know. I was lamenting the fact that Mark Hamill (Luke Skywalker) was coming to our hometown, and I had work and couldn’t go. I had seen a screening for this bizarre, hysterical movie called “Brigsby Bear” that he’s in, and had a promotional item for it I was going to have him sign. I know, fan-boy nerds, I should’ve gotten a Star Wars item signed. Anyway, what did the new bride do? While I was at work, she showed up at the event two hours early, staked out a spot, and was a stalker for Mr. Skywalker. The stars were aligned to bringing Hamill to San Diego. A few weeks earlier, he didn’t show up for Comic Con. What happened was a weird series of events. The San Diego Chargers bailed on us to move to L.A. There was a street in San Diego called “Chargers Blvd.” A few people decided that with that team gone, it should be named after Hamill, who lived five years in the town of Clairemont. A perfect excuse to change the name of the street. Somehow, councilmen got involved and decided it was a great idea to name a street after Hamill, but they opted for the street he actually lived on. What I find odd is...that seemed like such an honor, until I saw what they did. They didn’t actually change the name of the street. They merely made it an “honorary” thing, putting his name above the original street name. Geez!

Anyway, the wife lathered herself up in sunscreen (which didn’t seem to work, as she’s been red for a few days now). The sun was a lot harsher to another woman at the event. She fainted, and that caused a bit of a stir among the crowd.

The wife found an area with a few women in wheelchairs, and a few little kids. She told me, “I figured he’d have to come over for handicapped women. And the kids were an added plus. Not to mention the fact that I could reach over them for the autograph.”

I have to admit, as she explained her logic, I fell even more deeply in love.

Hamill was running late, and when he finally showed up she guessed the crowd was well over a thousand fans. Many of the houses on the street decorated their place in a Star Wars theme. Every news station was there, and the wife explained that many of them set their cameras and tripods up right in front of the area where they were. There wasn’t any crowd control, until after he arrived, and a man walked over saying they couldn’t stay in that area. They balked, and when cops showed up, the man tried getting the officers to get them to leave. It never happened, and they were allowed to stay.

After a few local politicians bored the crowd with long speeches, Mark Hamill got up. He talked about how honored he was, and how he was military brat and they often moved around. He mentioned living in San Diego the longest, and how if he had a hometown, that would be it.

He did a Q&A, and then the street sign was to be revealed. A police officer couldn’t get the sheet off the sign, as it got stuck. He pulled out his nightstick, and when that wasn’t working one of the fans nearby handed him his lightsaber. It brought laughs, but it also did the trick. 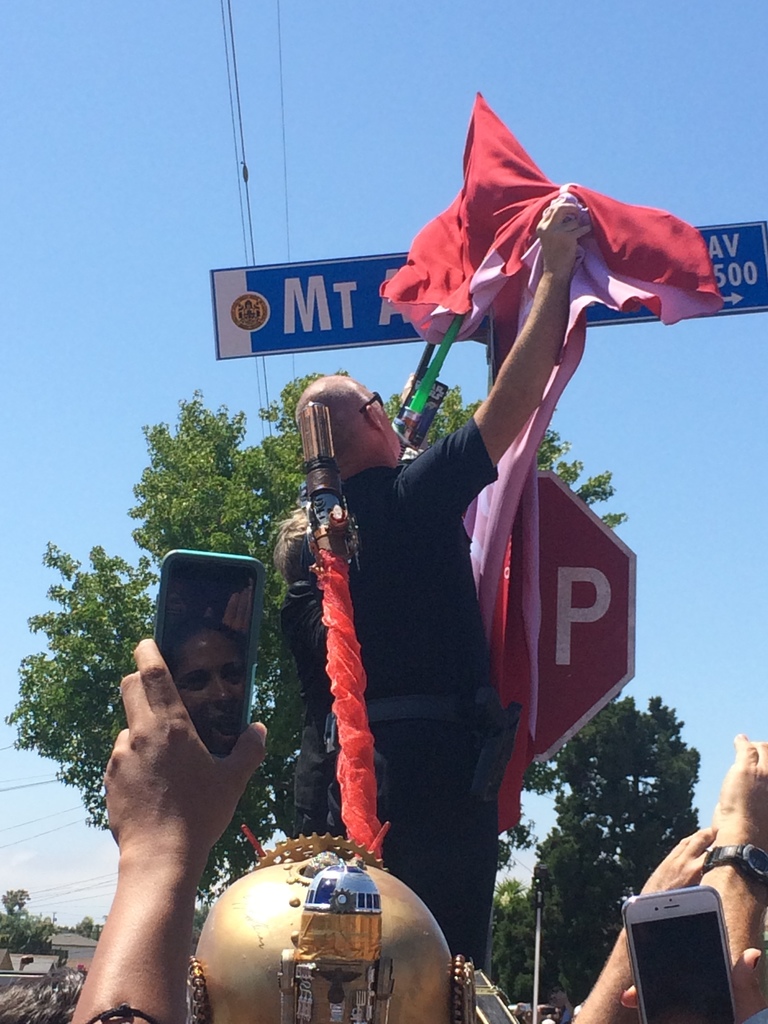 Hamill then came down from the stage and started taking pictures and signing autographs for people sitting in a special area. After the people in the special area were taken care of, he went to a huge crowd and started signing. My wife said he signed for about half an hour, never lifting his head up. She was talking to his son, who is also a voice-over actor. She told me, “He was super nice, but I didn’t feel like I could ask him to get the item signed.”

I cringed when I heard that, and she explained, “He already wasn’t going to bring Mark over when an artist that claimed he worked on his show had asked. So I figured there wasn’t a chance for me.”

All told, the wife wasted a total of 3 ½ hours, got sunburned, and didn’t get the signature. She now knows the pain of the autograph seeker (or as Yoda would say, “Autograph seek, sign a picture, he won’t.”)

When I told my wife over dinner, that at least I’d be able to write a blog about it, she said, “Title it ‘Mark Hamill hates Children and Cripples’.”

Uh...I was thinking more along the lines of “The Force Wasn’t With Us.”

She said, “Lame,” as she handed me the dessert she made with dinner.

I couldn’t love her more.

Great story.  Thank you for sharing, Josh.  May the Force be with you!

Yeah, Steve likes it because his name is on that autograph photo !

Robert Babb -- you bring up a good point. Using a spouse for tag-team purposes. So in the future, if I have a bunch of items, I give some to her, and I have some. That way, the celeb doesn't realizing they're signing them all for the same person. Hahahaahha.

My wife just reminded me...she told a story about a woman fainting from the heat. I completely forgot to add that in the story.

It's a shame she didn't get anything. Those events are so crazy. You could have people waiting hours and get nothing and someone who just shows up at the last minute might wander on to the perfect spot in line.

It's a tough situation, though. What is Mark to do? If he doesn't sign for anyone, then everyone is disappointed and upset. If he signs for some, then the other half are disappointed. I would imagine, especially since Carrie Fisher's death, the original SW stars are in even more high demand. I think the lottery almost has better chances than getting a free Mark or Harrison Ford.

Also, I get the impression that Mark is "all about the money." If someone really wants him they are going to have to pay or take the lottery odds waiting at an event.

Two things. Mark has always been really good about signing. He might do signings for money at conventions (I remember one Comic-Con where he and Carrie sat next to each other...I believe it was $35 per autograph), but he's nice to the fans.

Yeah, I've been to a few things were people just wander up like that, and they get it, and I don't. The two most painful times that happened were BB King...and Link Wray (look him up). The guy for Link had guitars and all kinds of crap, and after he signed that, he didn't want to sign for the other 5 guys there (including me). After the show his son took the stuff and said he'd sign it. I only had one CD !!! I never got it back, and Link died months later. Dude still owes me my CD sleeve !!! (and I was standing in the rain waiting at 1 am., too)

Mark is upwards of $300 per signature at conventions and private signings now, I'm surprised he signed at all. Recently he has been advocating against dealers selling his autograph pretty vocally.