What do Link Wray, Ted Nugent, and Kid Rock All Have in Common? 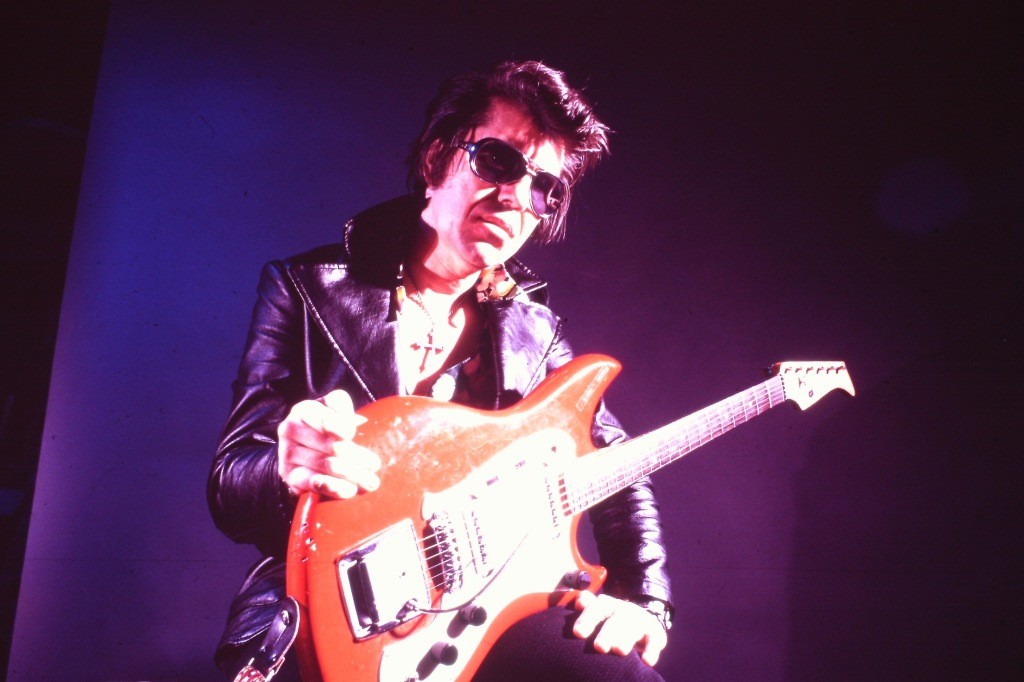 One of the perks I have being a movie critic is seeing all the movies before they come out (and not paying to see ‘em). At a screening the other night, I was interested in a documentary coming out soon called “Rumble: The Indians Who Rocked the World.” As a huge fan of rock ‘n roll, this is right in my wheelhouse.

I’m guessing many don’t know Jimi Hendrix had some Indian blood. And, it looks like lots of big name musicians are interviewed talking about the Native American’s in the music business, including Robbie Robertson of The Band.

The one I’m most curious about is Link Wray, who did the cool surf instrumental song “Rumble” featured in the titles name. You don’t have to know ‘50s/ ‘60s guitarist to know this song. It was featured in “Pulp Fiction”, during the scene in which Travolta and Uma go to that ‘50s diner (for some reason, it’s not on the soundtrack, but that’s another story for another time).

Wray also had a huge hit with the instrumental “Apache.”

Link Wray & his Ray Men used distortion and feedback that hadn’t been done on the rock scene before, and his songs had a great surf sound. Sometimes he’d even punch holes in the amplifiers to give the songs a more “live” feel in the studio.

Phil Everly said the song, originally titled “Oddball” should be called “Rumble” because it sounded like one. The song, perhaps the only in history, was promptly banned from many radio stations because of a mere title, that was deemed to possibly incite violence (boy how times have changed).

Iggy Pop decided to pursue music after hearing Rumble. Dylan called it the best instrumental ever.

In another documentary featuring musicians, “It Might Get Loud” (The Edge, Jack White), Jimmy Page pulls out the song and says it’s what made him love guitar. It’s a terrific tune, and it’s been ruined for me. Yep. I was once a lover of that great track, but I had a horrific autograph experience that has tainted it for me.

[going back to the artists previously mentioned -- I had met Phil Everly at a music conventional called NAMM and got his autograph; nice guy. Iggy Pop signed a CD for me, before his tour manager pushed me out of the way; Robbie Robertson, won an autographed CD in a contest. Travolta, who walks into Jack Rabbit Slim’s in Pulp Fiction, would’ve signed an autograph for me at the Critics’ Choice Awards, but I don’t like to bug folks for autographs there. I instead told him how much I loved his performance in Pulp Fiction, and we talked for a few minutes before the show started].

Anyway, back to my link to Link. He came to play a show at a small club in San Diego. The place holds 140 people. It’s perfect for autographs, too. Since there’s no backstage area, the band usually just walks outside after they leave the stage. I bought my ticket for the show, and my friend and I waited to catch him before hand. He was sitting in a van, and his son and another guy were taking all his gear out of the vehicle. We stood there patiently waiting. After 45 minutes, we saw a sight that we hate seeing at events. A yellow Mercedes with a guy named Dana driving up. This is a local musician, former heroin addict, and autograph hound that is as bad as they come. Now...the one thing I’ll give him is that he doesn’t sell his autographs. But he always pushes his way to the front of the line, and seems oblivious to common courtesy. He also insists, after getting his items signed, that the artist stand there with him holding his signed item directly in front of him, so there’s proof it’s authentic. The musicians always hate this. At one BB King show, his management said he’d sign for everyone if they lined up single file. There were about 50 people there, and I decided to leave. I didn’t want to wait around (and had gotten King years earlier). As I was leaving, that yellow Mercedes pulled up. He walked to the front of the line, with people bitching, and got his stuff signed and left. I heard about that later from a friend that waited in line.

He’s also a trust fund baby, so he has an insane amount of money coming in, and all he really does is sell records online. But I digress.

Dana showed up, and pulled out albums, a guitar (not just a pickguard, an actual guitar), and other items. Now, another thing I’ll give him credit for -- he’s willing to pay the roadies to hook him up. He’ll start handing over bills, telling them he wants his stuff signed. He gets Fillmore posters, and really great items autographed, but he’s also shelling out the big bucks to bribe folks. 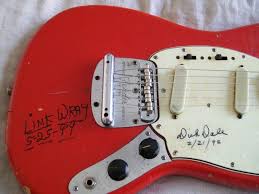 Link Wray’s son takes all of his items onto the van, and Wray signs them all. He thanks the son, who is also a roadie, and drives off. The son tells us, “He’s too tired to sign other items, but will sign for you after the show.”

The show started super late, and it ended around 12:30 a.m. It was raining outside, a rarity for San Diego. The son said to us, “Wray doesn’t want to sign right now, he wants to grab a bite to eat first, but will come back and sign for you.”

My friend is a teacher, and it was a school night. He didn’t want to wait, and left.

I naively stood there in the rain. About 20 minutes later, the van pulled up. The son got out and said, “Wray was really tired, so after he ate, he just wanted to go back to his hotel.”

I calmly, but sternly, went off on the guy. I said, “I’ve been waiting out here, it’s after 1 a.m., it’s raining. Had you just said ‘no’ the first time, I would’ve gone home. And ya know what? That guy you signed for before the show...he didn’t even go to the show. He’s just an autograph hound.”

The son said to me, “Okay, okay. Give me the CD you have. I’ll get him to sign it and mail it to you. Write your address down.”

I wrote my address down, while thanking him profusely. I asked if he wanted money for postage. He said not to worry about that.

Well, I never got the CD sleeve sent back to me, and Link Wray died, about 8 months later in 2005. 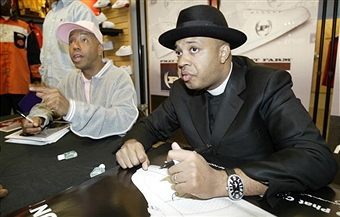 I didn’t learn my lesson. Years later, I was dating a woman that loved rap. We went to see Kid Rock, and were near the backstage area. We saw Reverend Run of Run DMC (he’d later go onstage and join Kid Rock for a few songs). I figured...since the merchandise booth was selling postcards for $5 I’d buy one and have him sign it. And that’s what I did. Well then, we saw Kid Rock’s cousin, who is the spitting image of Kid Rock. I asked if he’d be able to get it signed for me and he said that his cousin doesn’t like to be bothered before the show. I asked if he could get it signed after the show and mail it to me. He said, “Sure.” I wrote down my address and everything. Again, I never got it back. What makes that worse is...I paid $5 just for the autograph, and it was already signed by Rev. Run! And I’m not even a fan of these guys.

Well, I figured third time’s a charm. Despite Ted Nugent being a nut when it comes to talking politics, I grew up in the ‘70s, and he has lots of songs I like. I had gotten his signature on two other occasions, and I didn’t want to carry albums around the concert. I stuck a CD sleeve of his latest release,  in my back pocket and figured I’d see what would happen after the show. I waited with a friend, and when he came out, he stopped and took a few selfies with a crowd of about 10 women. I was hanging farther away, where I knew he had to walk right by me to his hotel. I asked if he’d sign the CD, and he didn’t look at me. I figured he assumed I was an eBay seller or something, so to make him realize I was a fan, I said, “How come in concert you never do the song ‘Pile Driver’?” He turned around with a big smile on his face and said, “I’ve done it.” I replied, “No, not since your time with the Damn Yankees.”

He laughed and said, “Yeah, you’re probably right.” I asked again if he’d sign the CD and he said nothing, walking into his hotel.

His son Rocco -- who was his tour manager (and I first met when he was a 2-year-old backstage at a Damn Yankees show, and Nugent seemed more concerned with getting my girlfriend into bed) -- was walking by a few minutes later. I asked if he’d get it signed and he said, “Sure, but...I have to go over stuff with my dad in his room. Can I mail it to you?”

Of course, another instance of not getting it sent back to me.

I think I’ve finally learned my lesson, and I’ll try to put that all out of my mind as I watch the documentary featuring Link Wray.

Nugent showed up at a Kid Rock concert in Detroit, I went to last year.

I do give them a pass when it comes to discussing politics. I mean...Sean Penn is one of the best actors I've ever seen. Yet he doesn't have a clue about politics, and always pontificates on the subject. He also treats people like crap. But, it doesn't mean I won't see his movies.

Ted carved an autograph into a fans arm with a bowie knife!

From numerous reports I've read,Ted will sign but only for cash in hand!

Comment by Rick Meyer on August 10, 2017 at 4:39pm
Kid Rock's a pretty tough signer at venues. I've tried for him a few times and never got him. I don't even try anymore.

Paul -- that reminds me of the time our radio station interviewed Brian May (Queen). About 50 fans showed up. He signed for all of them. One woman had called me the week before, and said how when she was a kid, she called his dad in London. That's how much of a fan she was. She wanted him to carve his signature into her guitar. I brought her into the studio and he did it, but was shocked, saying "This is sacreligious!!!!"  Now, the person with the carved signature in the arm...should get it authenticated by Roger Epperson ;-)

Great Stories!  I believe Link Wray also played the original Batman Theme.  He's been up for the Hall of Fame a couple of times, but I believe Dick Dale should get in first.  Actually it's a crime that they both aren't in already!

I would much rather have someone bring a guitar to get signed than a pick guard.  To me a pick guard screams ebay.  When Bono was signing and talking to people this summer in Pittsburgh, a guy had a pick guard out to be signed and Bono's manager grabbed it and flung it like a frisbee!  I laughed out loud!