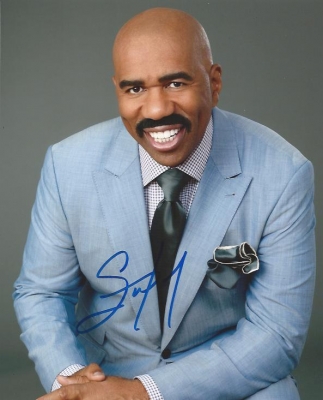 Steve Harvey is an idiot. I know, that sounds harsh. But let me make my case. First, his screw up at the Miss Universe pageant where he said the wrong name. Now, it’s not like the Oscars with Warren Beatty and Faye Dunaway. They were given the wrong envelope. And with Harvey, the reports were that he refused to go to the rehearsal, and that’s why he messed it up.

Second, he does these books about relationships. One of them, “Think Like a Man” was made into a movie (a bad movie) This is a guy that’s been married three times, and he’s giving relationship advice?

Third, and this is strictly a complaint I have -- he’s not funny. This is a guy that makes millions and millions a year, and has very little talent. A perfect example of this is his hosting duties on “Family Feud.” Sometimes a contestant will say something witty or shocking. His response? A goofy scrunching of the eyes, and looking at the audience. How about a humorous response?

But none of that is what inspired me to write this. It’s the release of a memo he gave to the staff on his talk show. It basically scolded them for coming to talk to him. It banned them from approaching him, talking to him, going into his dressing room to talk with him, or bugging him when he’s in the makeup chair. It all reminded me of a woman my wife knows. She worked in some capacity, with Beyonce. She had a rule that you couldn’t look her in the eye. So...these types of things rub me the wrong way. Now, here’s the best party. On one of the entertainment shows tonight, he spoke on the phone to clarify things. He got angry as he talked about how everyone on his show was always bothering him, he didn’t have time to sit and relax. At one point he said, “People are asking me to sign this and sign that.” Ah. Autographs again bothering famous people. I immediately thought about the time my mom went to the Regis and Kathy Lee show. She was surprised that before the show started, and during commercials, staff members came out to the crowd and asked if anybody wanted things signed. Some people had books, and others had photos. They collected them all, and brought them back signed later. See how easy that is to do?

In a terrific documentary called “Comedian,” they follow around Jerry Seinfeld as he makes a “comeback” tour after his show ended. They also follow a new (and terrific) comedian named Orny Adams. There was a point where Seinfeld is waiting to go onstage, and an employee of the club came backstage and asked for a photo. Seinfeld snapped at him. He said he’s getting ready to go on and it was a bad time. I can see Seinfeld’s point, but there’s a way to say that nicely; or to simply say, “If we make it quick. I’m going on in a minute and need to concentrate.” I met Seinfeld once before one of his stand-up shows in San Diego. It was me and three other fans. As he was getting out of the car, an ambulance came by with screeching sirens. He put his hands over his ears and you could tell he was pissed. We asked for his autograph and he said, “Not now guys. After the show.”

I thought that was perfect. You know why? The autograph dealers wouldn’t be there, and he knows that’s what you usually see in the afternoon, lurking around the side of the stage door. After the show, it’s the fans that paid money to see you. So after the show I was back, and unfortunately, so were about 50 other people. But guess what? He stayed true to his word, and signed for everybody. He was signing quicker than I’ve ever seen anybody sign. Of course, the silver paint pen (literally my least favorite thing to have somebody sign with), stopped working. He said, “Sorry man, your pen stopped working.”

I got half a signature. Well, that’s not true. I borrowed a black Sharpie from somebody standing nearby, and kept pestering him. He just looked at me, and kept signing for everybody else. Finally, before getting into his car, he grabbed the book and signed it. So, I have one and a half Seinfeld signatures on a book cover. I’ll take it.

When I saw Kathy Griffin in concert, she talked about being on an episode of Seinfeld. It was a funny routine about a gay friend of hers having an Oscar party, and she wanted Jerry to sign something that said, “Sorry I couldn’t make it to your party. I’m sure it was great.” (or something like that). Before the filming, he turned her down and said later. But after 10 hours of shooting, when she approached him, he was arguing with somebody. She interrupted, and he sort of snapped at her before saying, “I’ll sign, but I’m not writing all that.” 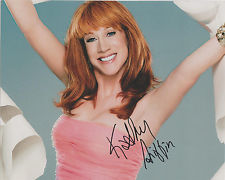 Seriously, what is wrong with people? How hard is it to write a funny message that somebody will cherish forever?

And how hard would it be for Steve Harvey to sign things for the various staff members of his show? Now, when I was talking to Paul McCartney’s guitarist -- the talented Rusty Anderson -- he told me McCartney said to them on one of the first days in the studio, that if they wanted anything signed, to bring it in. They all brought albums and things for themselves and their friends, but he decided he wouldn’t keep doing that because it would be unprofessional. So...if Harvey had a particular person that kept doing that, he could’ve told them directly. But to tell everyone, in a memo, not to approach him -- it’s just a d**k move. 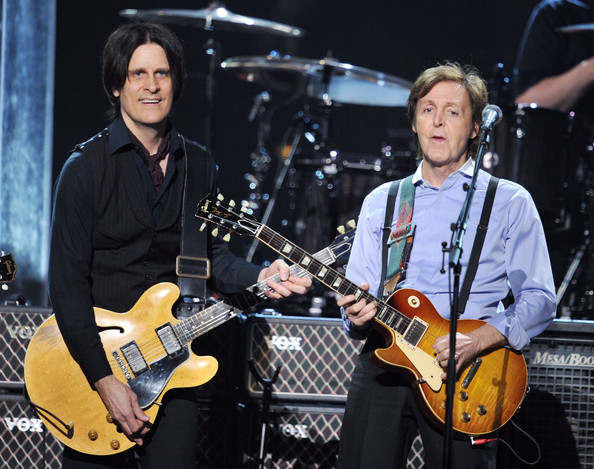 He claims it’s a disgruntled employee that released the memo, because the show is moving to L.A. and not everyone can come along. Well...don’t write things in a memo you don’t want the public to know.

I’m waiting for some clever autograph collector to get a copy of that memo, and ask Harvey to sign that!

Steve Harvey a ten dollar autograph, that says it all. I believe Jerry usually is a better signer after his shows and does scribble sometimes. I'm sure he needs to prepare for his show so I don't fault him too much.Kathy Griffen,another phoney (Amy Schumer also not real nice).

This guy is the host of a show no one's cared about for 30 years. Yeah, that ego is well-earned.

I love how he keeps trying to explain on various shows, "These people ambush me....with their friend from college that wants a photo or autograph, when I'm trying to walk from the stage to my dressing room."

Seriously, that's not that big of a deal. He's a dope.

josh!  I have heard that Seinfeld maybe autistic, so that may explain his mood.  I have a steve Harvey signed book if you want it lol! awesome story!

A lot of performers have different personalities before and after performances.  Especially standups.

They're focused on doing their shows. Standups may be trying to read the crowd.  They don't want to be interrupted.  That pre-show prep is part of doing their job.

Afterwards they can relax and be themselves.  In Steve Harvey's case that just makes things worse.

That's a decent point Sidney, but still. In the documentary, Seinfeld isn't trying to read the crowd. He's just sitting in the backstage area/green room, going over bits in his head. Now, the argument could be made....he's trying to concentrate/memorize routines, but still. And...he has done similar things AFTER the show, so...I can't buy that he's trying to memorize bits. Also, if they're so worried about being liked and adored by the audiences, well...no better way to do that than signing autographs and take photos with them before the show!

That's a decent point Sidney, but still. In the documentary, Seinfeld isn't trying to read the crowd. He's just sitting in the backstage area/green room, going over bits in his head. Now, the argument could be made....he's trying to concentrate/memorize routines, but still. And...he has done similar things AFTER the show, so...I can't buy that he's trying to memorize bits. Also, if they're so worried about being liked and adored by the audiences, well...no better way to do that than signing autographs and take photos with them before the show!

I don't know about Seinfeld.

But I doubt any experienced performer is doing any memorizing at a show.

My favorite standup, Bobby Slayton, will pace the back or sides of a room during the warm up act.  He appears to be sizing up the crowd...perhaps picking out who may be good targets for some of his bits.

I try to put myself in people's shoes. If I was about to go on stage I wouldn't want to be bothered with anything unrelated to my performance.

Of course, people are different.  Some people may not mind before a show.  Some may just blow off fans afterwards. Some may be in a hurry to go somewhere else. But generally, it seems after is easier.

Slayton is a genius. I had the thrill of interviewing him on the radio once. Such a terrific comedic mind.