As a movie critic, people often ask me what my favorite films are. You can never pick your favorite one, but I have a bunch that are always on the list. I’ll say that I can’t decide between Tootsie, One Flew Over the Cuckoo’s Nest, Star Wars, Dr. Strangelove, Casablanca, Pulp Fiction, Godfather...a lot of the usual suspects (the movie “The Usual Suspects” would probably make my Top 100, but not my Top 10).

When I worked as a DJ at a rock station, I was often asked my favorite bands. My top three never changed. It was The Doors that were the top of the list, followed by The Beatles, and a distant third goes to Led Zeppelin. The rest of the Top 10 might have different bands on different days, deciding how I felt when somebody asked me to name my favorites.

One band that always made that list, always seemed to confuse people that asked me. It was Bow Wow Wow. You all know them for their cover of “I Want Candy,” and some in the U.S. might remember “Do You Want to Hold Me?” Those in the UK might remember “Go Wild in the Country,” but this band had a lot of amazing tunes. The Burundi drum beats, the surf/punk guitar, and the amazing vocals of Annabella Lwin, who was 14-years-old when she joined the band (and made this album rather controversial). It wasn’t until I was an older teenager that I knew about their manager, songwriter, and the guy that put the band together -- Malcolm McLaren. He was also the guy behind the Sex Pistols. He managed The New York Dolls, and always had his hand in a lot of things going on with punk rock in the UK.

I remember seeing his address in Autograph Magazine, and I send him a Bow Wow Wow cd sleeve, as well as a sleeve from one of his solo discs. I never got them back. It’s always the chance you take when you send something in the mail.

Luckily, this was before I had the rest of the band sign my records and CDs. They’ve always been great about signing autographs if you meet them in person, although you should be warned. The original bassist is no longer with Annabella, and he tours using the name. If you go, make sure it’s got the name “Annabella Lwin” or you’re not seeing the real singer.

Anyway, when McLaren died six years ago, so I figured I’d never get my CDs back. Well, I just heard this story on the radio a few weeks ago, and it was bizarre.

McLaren’s son said he’s going to burn the collection of punk memorabilia he owns, which is said to be worth around $7 million. He said that he feels the subversive music genre had been appropriated by the mainstream. 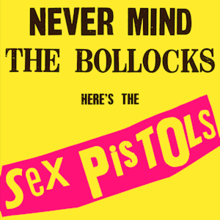 Joe Corre, whose mother is fashion designer Vivienne Westwood, said that “Rather than a movement for change, punk has become like a museum piece or a tribute act.”

Nothing wrong with that statement, but hell...why not sell the memorabilia off, and if he wants, donate that money to charity.

Corre, who co-founded the lingerie brand “Agent Provocateur” (side note: I love the Bow Wow Wow song “Radio G-String”), is going to burn his entire collection on the 40th anniversary of the release of the Sex Pistols’ debut single “Anarchy in the U.K.”

Now, if he really wants to create anarchy, he’ll do this without a fire permit. But I digress.

I’ve never been the biggest fan of punk rock, but I do love The Clash. Their late singer Joe Strummer was always great with autograph collectors. One time when I was backstage at a Hootenanny Festival, he sat and signed autographs and met with 40 fans waiting outside his trailer, even though he had a fever.

He died less than a year later.

I have a friend that has gotten various members of the Sex Pistols, but he says their singer (Johnny Rotten), has gotten a lot harder over the years, and for the last five years, has refused to sign any Pistols memorabilia.

I’m guessing Sid Vicious has been hard to get for the last five years, too.

(what? That joke in bad taste? Too soon?) Josh,  I just showed Cuckoo's nest to my psychology class this year... they loved it!

Good to know about Annabella Lwin.  I will be on the lookout if they come around!

Will Sampson (Big Chief) signed in the hospital before he died, 1987, black ink on blue index card. Gotta say, I prefer the book, but the film is superb - masterpiece. The play...depends. Hanging on my wall. I guess albums signed by whole band back in the time are some what rare. This one was a price in competition by an Finnish rock magazine. No idea what this is worth thought...

Johnny, I sent you a "friend request." Accept it and message me, I have something I want to discuss with you.