We’ve all heard the crazy stories about R. Kelly and how he kept women locked up (allegedly), and the various rape charges. There was that crazy interview he did with Gayle King where he stood up and started freaking out and she sat there calmly, saying his name. 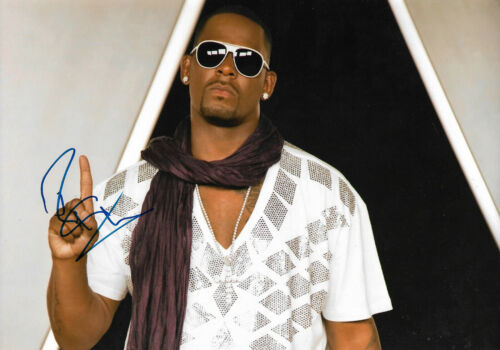 Well since the latest story involved an autograph, I thought I’d share it. A Minnesota prosecutor charged the singer with prostitution and solicitation in relation to a 17-year-old girl back in 2001. She asked for his autograph, and he gave it to her, along with his phone number. She called the number and he invited her to his hotel, where he paid her $200 to dance naked with him. She did, and that escalated into some sexual things on the bed.

I had always wondered if a famous person was attracted to a person that wanted an autograph, would they also write their phone number. I remember once reading a story that Jerry Seinfeld had a completely different phone at home, that he used strictly for women he gave his phone number to.

I dated two different women over the years, that had funny stories like this involving Robert Plant. One of them got backstage and approached him with her ticket stub, wanting him to sign it. He got up and said, “Hey good lookin’” and as he hugged and started touching her, she said, “Stop! That’s not what I want. I just want your autograph.” He looked surprised, but grabbed the ticket, signed it, and went and sat back down. She promptly left the backstage area.

Another woman told me after a Plant concert, her and her friends were at the hotel next to the concert venue, because they had a bar/lounge area that people often went to after shows. She ran into Plant in the bar, and she asked for his autograph. He said, “I’ll give you my autograph, if you give me your phone number.” She made the exchange, and told me, “The craziest thing was, he had his arm around two gorgeous women at the time. I wondered why in the world he’d be interested in a third woman, when it looked like he had his hands full.” She said he also seemed a bit out of it. The next morning, she had two calls on her home answering machine. I might not have believed the story, if she didn’t play the recordings she had saved. I couldn’t stop laughing. In the first one, he sounded somber. He said something like, “I’m really sorry about last night. I had a bit too much to drink. But you seem like such an interesting woman, and I’d like to have breakfast or lunch with you this morning before I head out.”

Since she was sleeping, she didn’t hear the messages. Her dad was a stand-up comedian and singer, and he had recorded this wacky outgoing message on her machine. So in the second message Plant left her, an hour later, he was screaming. It was something along the lines of: What is this crap?! I’m trying to get a hold of you, and I have to listen to some crazy old man on your answering machine, saying all kinds of weird, goofy things. This is ridiculous! Just answer your phone and stop with all the silliness!”

She did try to call the number he left for her, but he wasn’t there.

Ah, the life of famous musicians.

I read a post from someone that their wife went to get a golf ball from Fred Couples and if he would sign it. Fred wrote his number on the ball and handed it to her. She then went and showed it to her husband. Just as Fred was getting ready to tee off, he shouted at Fred that he forgot something and read the phone number out loud in front of everyone. Fred hit is shot then had his caddie go and retrieve the ball with the number on it.

The blogs not don't appear on the left side of the page any longer. That's how I saw the updates. Steve should fix that.