Not a bad spring on the musical front.  As usual, I had some hits and some misses while trying to add to the collection.

First up was America.  This was by far the fastest and easiest autograph I have ever gotten.  I went right to the hotel after the show and as I was walking in, Dewey and Gerry were walking right behind me.  I asked if they could sign and both happily did.  Wish they could all be that easy. Next was Brian Wilson.  He actually played the same day at Timothy B. Schmit but at a different venue.  About 6 of us waited about 2 hours for Brian to arrive.  His bus pulled up and he needed help walking to the venue.  He waved and said “After the show.”  We were encouraged.  I waited around a bit then decided to drive the 40 minutes to see if I could catch Timothy.  Well, those few minutes that I waited cost me.  He signed 1 each going into the venue and I missed him by 10 minutes!  I went back and saw the Wilson show and left during the encore because I thought he might be a mic drop and out.  Well, he was.  He made a b-line to the bus and never acknowledged us.  Al Jordine also did not sign because he “wasn’t feeling well.”  That was an 0 for 3 night.

Blues Traveler played a great show the next week.  This band gets it.  After the show, they all came out and signed and took pictures with everyone.  John Popper couldn’t have been nicer.  One guy had at least 10 things and his manager said “He’s not signing all of those.”  John said, “let me see.  Yeah, I’ll sign them all.”  Probably because they were all different items. Garry Tallent from the E Street Band also played a solo show.  It was a great show of rockabilly originals and some cover tunes.  It was a lot of fun and Garry was gracious and signed at the merch table after the show- of course he was selling his new CD and posters.  I had a few things for him to sign (I also bought the poster).  However, when he got to “Tunnel of Love” that also had Nils Lofgren’s auto on it, he said “I didn’t play on that.”  I said “Yes, you did, you played on one song, so it counts.”  He said “Sorry, I’m mean like that.  I’ll sign something else.”  I had  nothing else.  I get not signing something if you didn’t play on it, like Schmit not signing “Hotel California” but if you were on at least one song, why wouldn’t you sign?  Some people are funny. 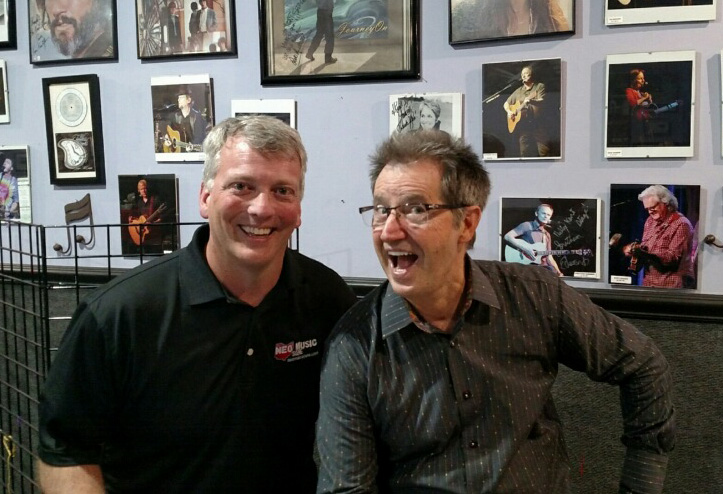 Tesla was the next band that came to town and it happened to be the next night.  They sounded great and 4 out of 5 guys are original.  I made up a drum head with their logo and waited after the show for the guys to sign.  Jeff Keith was the first to come out on a cold spring evening.  He had a scarf around his face and said “Sorry guys, I can’t.  I can’t risk my voice in the cold.”  The he looked at the five of us and said “I can’t turn you guys down, who’s got a Sharpie?!”  and proceed to sign everything we had.  The rest of the band came out and signed and took pictures as well.  Lead guitarist Frank Hannon actually reached into his pocket and grabbed a handful of guitar pics and gave them out.  Another band that really appreciates their fans. 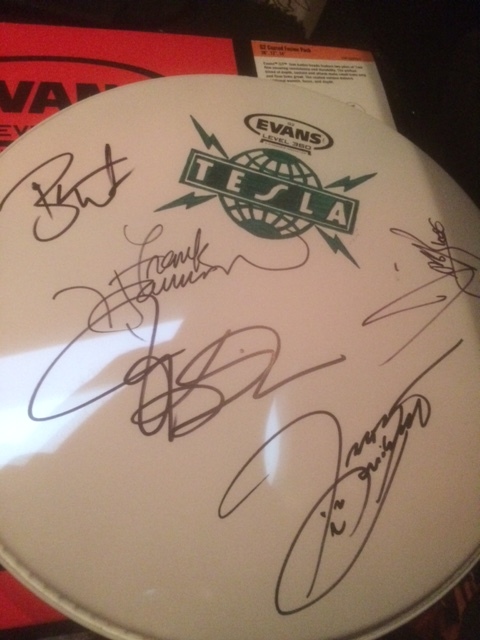 The next night Foreigner came to town.  This was the third show that I shot in three days.  Even though there wasn’t one original member- Mick wasn’t there but he is scheduled to tour this summer, the band sounded great!  And you know what- the sold out crowd didn’t care and I don’t think most of them even had a clue.  I did get to add Jeff Pilson to a couple of Dokken things.  Only he and the sax player came over.

May finally rolled around and the weather started to get nicer.  The Chili Peppers came to town on a Saturday and I decided to put in some time at the hotel.  All I can say is Chad Smith is one of the nicest guys you will ever meet in rock and roll.  He came out for a smoke, signed for the 5 guys that were there and proceeded to talk with us for ten minutes.  We mostly talked about the Rock and Roll Hall of Fame.  He was so cool and didn’t care about signing at all.  He said that the music should be about the fans.  He’s my new favorite guy in rock!  Jack Irons, the original drummer of the Chili Peppers was the opening act and I also got him to sign- it’s a terrible graph, by the way.  He did say “I don’t sign pictures”  I had my poster of the Rock Hall with a few other on it and I asked if he would sign that.  He said “What am I signing?”  I said “A picture of the Rock Hall, you’re a Hall of Famer!”  He said, “Oh, ok.”  as he put his scribble on it.  Josh came out and actually flinched when we approached him.  He said “I don’t do that anymore, signing is gross.”  Whatever, dude.  Anthony went right to the bus, smiled and said no.  Flea went right to the bus, never moved his head and totally ignored us.  I didn’t think it was worth going back after the show (they sound great by the way) so I headed home.  My buddy did go back and Chad signed and when Flea came off the bus, he went right to them and said “Why do you want me to sign things?” and proceeded to sign 1 each. Tears for Fears and Hall and Oates also came to town.  I got John a few years ago and heard that Darryl is pretty tough so I decided to go for Tears for Fears.  Well, we waited 4 hours and got nothing.  I guess I missed Curt Smith by a few minutes and he did sign a few, but going to the show, they both totally ignored us.  What a waste of time.

Finally, Prince’s former band, The Revolution is touring.  It’s the lineup from the Parade and Around the World in a Day.  Drummer, Bobby Z signed before and after the show and was great.  I missed Dr. Fink because I had to get into the show but I heard he signed before, but no Wendy, Lisa or Brown Mark.  After the show, there was a crowd of about 20 waiting.  I think they must have thought it was 1984 because all of them, besides Bobby Z, got into their SUV’s and took off.  I made a drum head with The Revolution logo on it (like the Tesla one) thinking that the band would be cool and sign.  Well, at least I got the drummer!  Kinda wasted a drum head. Sometimes you win, sometimes you lose.  But that’s what makes this hobby fun, yet frustrating!

This summer, there are a lot of big names coming to town.  Not only am I getting to check them off my concert list, but I hope to check them off my autograph list.  Here are a few graphs that I want:  Tom Petty, Paul Simon, Neil Diamond, Sammy Hagar/Michael Anthony, U2, Natalie Merchant, Billy Joel, Rod Stewart, James Taylor and Bonnie Raitt.

I was backstage at Foreigner, for a Make a Wish Foundation (back when I was still a volunteer for them, until I found out they auctioned off fake/forged signed items). I was surprised only the guitarist (Spooky Tooth Mick) was the ONLY original. That blew me away. But you saw them with NO original members. Gotta be a first in rock history.

I was waiting in line to use the porta-john before a Foreigner concert last year, and I mentioned to someone I had never seen Foreigner before. He said you won't see Foreigner tonight either. Good show though.