The month started out with me traveling to Pittsburgh to see U2.  The Cleveland show was sold out, but there were plenty of tickets for the Pitt show. (The show was amazing.)  I arrived early because I had heard that Bono and The Edge signed before the show.  I met up with a nice family and started talking with them.  After hours of waiting, the four members arrive in four separate SUV’s, all of them put their windows down and waved.  However, Bono held up one finger- like saying wait a minute.  His manager came out and said, we are running really late but Bono will come out and say a few words, he can not sign for all of you though.  There was a crowd of about 50 people waiting before hand, but when Bono came out, it turned into hundreds. 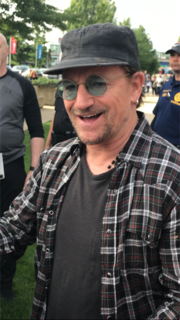 Bono made his way down the line, which was basically hit and miss.  He did seem to look for kids and made sure he signed for them.  Although I didn’t get anything signed, I actually recorded a conversation Bono had with a 12 year old girl who was right in front of me.  She made a painting for him (of him) and she wanted to give it to him.  He was very appreciative of it and said “Do you want me to sign it?”  He then said, “Here’s what I’ll do, I’ll take a picture of it, with you, that way I’ll have it.  But I want to sign it for you.”  He then took out his phone and took a picture the painting and her.  She then broke down crying so he came over and gave her a hug and kissed her on the head.  It was an awesome moment and I was glad I was there to watch it.  Bono then made his way down the line, signing a few but mostly shaking hands. 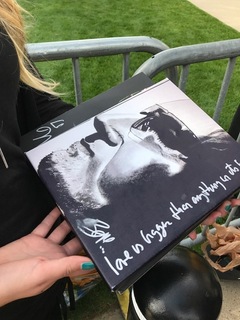 Neil Diamond came to town, which was another bucket list concert.  This is perhaps the weirdest story ever.  My friend and I tried at the hotel before the show, but no luck.  It turns out we were at the wrong hotel.  Cleveland has so many options now- I don’t like it!  Anyway, another friend of mine went to the correct hotel after the show.  He was the only one there and security told him to get off the property.  Once Neil arrived, he had his own security and he actually waved him over.  My friend had one album in his hand and asked him to sign it.  Diamond look at him and said “What else do you have in the bag?”  He responded four more albums.  Diamond said give them here.  So he pulled the albums out of the bag and Diamond inspects each one, pulling out the vinyl and grading each album saying “that’s in good shape, this one isn’t so good.”  Then Diamond says “How much?”  My friend said “Mr. Diamond, I don’t have any money to pay you, I would be happy if you just signed the one album.”  His security guy look at him and said “You don’t understand, how much for the albums so he DOESN”T have to sign them?”  My friend was flabbergasted and didn’t know what to say.  Diamond proceeds to take out his wallet and hand over a fifty dollar bill, puts it in his hand and walks in the hotel with the five albums.  I’ve never heard anything like it!  I proceed to throw my Neil Diamond albums away when I got home!

One of my favorite bands is Tom Petty and the Heartbreakers.  They came to town so I figured I would put in some time.  Well, it turns out they fly into each city and head right to the venue and then they fly out right after the show.  So I never saw them in town but I did go to the show.  (another excellent concert).  We did spot a tour bus, so we figured it must be Joe Walsh, Petty’s opening act.  It was!  Joe’s manager came out to the four of us and said “Ok, Joe’s gonna do it.  I’m gonna come back with post it notes, so put your name on it or whoever you want it made out to.  One item per person and no Eagles stuff.  I’ll take it on the bus and he’ll sign it there.”  We all agreed to those rules.  A few minutes later, out walks Joe and of course I say “How ya doin’?”  Joe responds “How ya doin’?  I’ll sign it on the bus.”  As Joe’s on the bus signing our albums, his manager comes off the bus and hands us each a guitar pic, which was very cool!  We all then got our albums back and Joe went to soundcheck. Huey Lewis played the same day as Tom and Joe but at a different venue.  We heard he and the band were great after the show and signed everything for the fans.  I gave a friend of mine my “We Are the World” album and got Mr. Lewis to sign it.

Another legend, Paul Simon came to town.  This was a bucket list concert as I had never seen him before.  Another good show!  My friends and I put in some time before the show to see if he might do a roll down.  After a few hours of waiting, a roadie said to me “I’ve been working with him a long time and he doesn’t like to sign, but he might do a picture.”  I said I would be happy with that.  Well, Paul rolled right in and went to the stage for soundcheck and never made his way to us.  Oh well.

My friend got a tip that Dan Marino was coming to town to talk to a group in Canton.  There are always Hall of Famers coming to town, but most things aren’t advertised.  We got Dan coming into to town and he was very nice.  He said he would do one each so I got my HOF Dolphins mini signed.  Even though he signed it on the logo- I can’t complain because it was free.  "Laces out, Dan!"

One of the best voices in rock and roll is Ann Wilson of Heart.  She is out on a solo tour as Heart is on hiatus.  Man, that woman can sing!  It’s one of my top shows of the year.  Anyway, after the show she went right to the bus.  However, her husband came out and said “Give me your items and she will sign them from the bus.  Don’t give me a lot at one time, I will make several trips.”  How cool is that?  That particular venue always has tour posters made and they have extra’s.  I ended up getting 2 Heart albums, the 2 posters, Footloose Soundtrack (w/Kevin Bacon and Mike Reno already on it) and my Hall of Fame poster signed by Miss Wilson. It’s been years since Sammy Hagar made an appearance in Cleveland.  My friend said he felt they would arrive the day before the show since they had the day off.  I couldn’t make it there because I had other things to do.  Turns out he was right.  Hagar and Michael Anthony came out of the hotel and signed everything that the six collectors had.  I tried the day of the show at the venue both before and after the concert, but was told by security that the managers didn’t want anyone back by the buses.  Dang it, I should have went the day before.

Finally, two successes.  Marshall Crenshaw played a small club with Los Straightjackets.  It was a fun show and Marshall came out and signed for the few fans that were waiting afterwards.  I got him on the La Bamba soundtrack where he played Buddy Holly in the film and contributed a song on the soundtrack.  And the legendary 4 Tops played a local gig.  Well, there is only one original Top left and that is Duke Fakir who is 81 years old.  I figured I had to try and get him on my HOF poster as well as my Live Aid poster.  After the show, he came out and I asked if he could sign.  I don’t think he heard me and I was the only one there.  I asked again, but this time his son was out and said “Dad, can you sign this?”  Mr. Fakir stopped in his tracks and said “Send him over.”  Security said that I wasn’t allowed by the busses.  I said, but he called me over it should be ok.  Security said “Not by our policy.”  The son said “It’s ok, he’s with me.”  How awesome!  Mr. Fakir said “I don’t mind signing, but I gotta watch my steps!”  He proceed to sign both posters and I was happy to meet a legend who’s been at it since 1953! 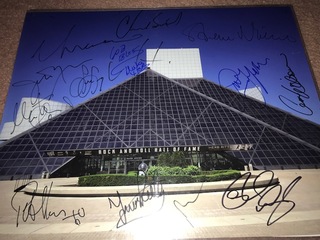 That scribble between Trevor Rabin and Rick Wakeman at the bottom, is actually Jack Irons from the Chili Peppers.  One of the worst graphs ever!

I didn't know Joe Walsh does not sign Eagles stuff anymore.  Anybody else heard that? Guess complete signed albums/photos just got ALOT harder to complete!

Congrats Coach, I heard diamond was iffy.Simon is next to impossible anymore. Shame about Bono. From what I've heard, Walsh rarely signs Eagles Lps now. They are saying Waters is getting fussy with what he signs now to discourage some of the 150 people lining up for him so its best just to bring an Lp.

Thanks Ian- I have my Wall and Dark Side albums ready to go!

When Walsh did a record store signing two years ago, people were very surprised that he signed Eagles stuff then.  I'm happy to have my Hotel California signed by he and Don Felder.

I suspect he will still sign them occasionally but not as much as before. I remember that signing, I got one from you!