Saw the play "Cheaper To Keep Her" and had a meet and greet with Vivica Fox.....

I had won an auction several months ago for tickets to the play "Cheaper To Keep Her" and it also included a meet and greet backstage with Vivica Fox from the movies Kill Bill and Independence Day.

So the closest venue was Atlanta so that was the one I picked and I was able to use my Hilton Honors points and they gave us a free room on the Executive Level so we had free drinks and food for the weekend but we did go out and have a nice dinner.

So we get to the play and there are no tickets waiting so I called BJ Coleman the owner of the production company that works with Vivica and he said the tickets were on the way and after waiting about 15 minutes they finally showed up and we had front row tickets in the Pit area so the seat were great and the polay was even better. I have to say if you get a chance to see it go because it was fantastic.

By the way we were also sitting behind Vivica's special guess for the matinee show Mo'Nique from the talk show and won the academy award for the movie Precious. I have to say she really didn't look like she wanted to sign anything so I didn't push that.

So we met BJ and Crystal Vivica's assistant and she said she would come out and take us backstage after the show was over.

So when the show ended we waited and Crystal came by and grabbed us and took us backstage and while we were waiting Mo'Nique came backstage and talked with Vivica and didn't really acknowledge anyone else standing there and then she went out of the back door and didn't say a word.

Now it's our turn and Vivica was an angel she signed my two posters Kill Bill and both of our play programs and we didn't even have to ask she just grabbed them and said let me sign those and then we took some pictures and I have one of us all together below and I will post pictures of the poster and programs this weekend. But we were behing te stage and it was really dark so we ended up on the stage and took some pictures and it was just a great weekend.

After that we went to the front of the theater and a few of the other cast members were signing autographs so we got those also and that included award winning singer Brian McKnight.

By the way Vivica may be coming back to Atlanta for the Wizard World Comic-Con there in December and I am talking to BJ to see if I can help her over the weekend a the show since that is my area of expertise and I know pretty much everyone with Wizard. 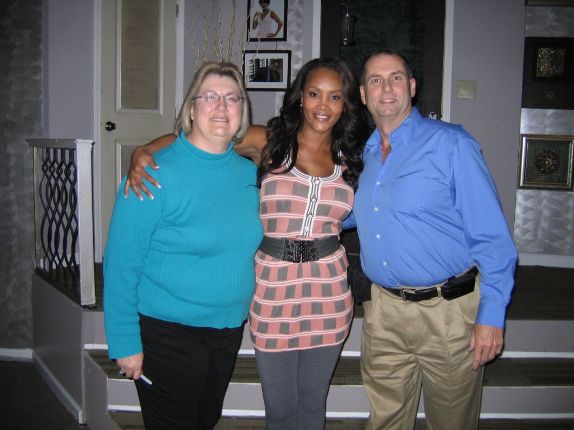 Comment by Robert Babb on November 10, 2010 at 5:59pm
Cool story Chris! She seems to be an awsome lady and signer as well. I was facinated to know from autograph that she is originally from south bend indiana. I got a nice autograph from her ttm about a a year a go. She really does seem to enjoy her fans!