I Was Invited on the Nate Berkus Show—and Met Matt Dillon at Dinner!

My story starts last Tuesday in the afternoon. I receive an email mail from a website that I use to show some of my movie memorabilia. The email reads like this “My name is Jessica and I am the producer on the Nate Berkus show and I would like to talk to you about a piece of your movie memorabilia would you please call me”. So I am of course taken by surprise so I went ahead and called the number and she asked if I would be available to fly to New York on Wednesday and be on the Nate Berkus show Thursday morning with some of my movie memorabilia. So the first thing I do is call my wife and she says if it’s on the up and up then go for it. So between about 100 emails and 20 phone calls she let’s me know that my flight was scheduled to leave Huntsville Wednesday evening and be in New York around 10:30 that night. So I’m like wow this is really happening.

So I arrive in New York after a short stop in DC and they have a driver waiting for me and he takes my luggage and we head off to the Lucerne Hotel and as they describe it the posh upper West side. So I get in to my room and it’s about 85 degrees in there so I turn on the AC and leave for a bit. I wanted to find something to eat and turns out that the attached restaurant is still open so I sit down grab a beer and order some food. Now her is my in person encounter. I am sitting there and I’m about half way through my meal and in walks Matt Dillon with another guy and they sit down right in front of me and I am about 7 feet from Matt Dillon so immediately my mind is racing how do I approach without looking like dork. So I waited and they ordered and they were about done with their dinner and the waiter brought me my check and the idea hit me. How often do you get a chance to buy one of your favorite actors dinner so that is what I did.

Okay so they are finishing up and I am drinking the last of my water and beer and the restaurant is closing so I figure this is my chance. I get up walk over and introduce myself and he is a little standoffish so I said nice to meet you and started to turn and he said wait where are you from and I told him and he asked if I was staying at the hotel and I said yes that a show had flown me in to be a guest and he asked what was the show about. I told him and then about 15 minutes of conversation ensued about movie, rock and other memorabilia. So I asked if he would mind signing something and he did so I asked about a picture and he said he would prefer not and so I thanked them and told them dinner was on me and they said no but I was persistent. Now I thanked them and started to go and he said wait give me your address and I will mail you something so I gave him my business card and made some notes and we parted ways. It’s almost 1 A.M. and I have a 5:30 wake up call to catch my ride at 7:00 to the studio. I get there and they walk me in and I have my own GREEN ROOM with my name on the door. They also have breakfast catered so I grab some coffee and some fruit. So now I meet Joe Maddalena who is on the new show Hollywood Treasures on SYFY channel and he will be doing the appraisals. So we go for makeup and then they finally take us down to get our microphones and we wait. Finally they walk us out for the taping they sit me in the front row and Nate and Joe are on the stage. Now they bring out my items and they are set up really nice with placards with the name of each movie. Now we get started and everything goes according to plan and no retakes. Now we are done so they let me sit and watch the rest of the taping. 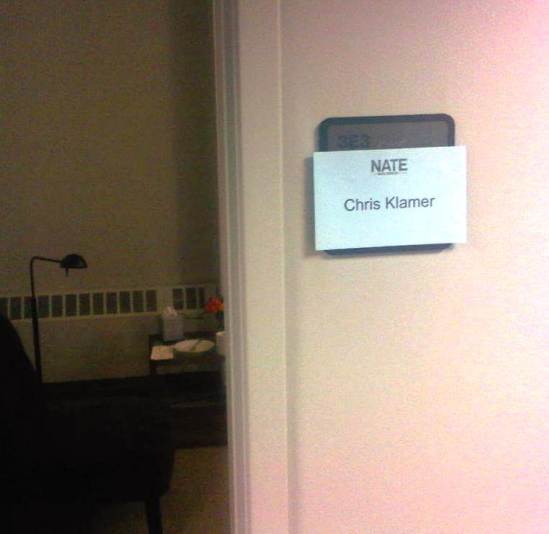 Now that I am done I have about 3 ½ hours to walk around New York before I meet my driver for the ride back to the airport to go home. So I hit as much as I could and then headed back and I even took the time to have lunch at Carmine’s and man was that great food.

So I got home about midnight Thursday and I am still trying to get rested after my very quick trip to New York.

Now the show itself will air on November 8th at 2:00 P.M. Central time and it should be on your local NBC affiliate and here is the weird thing his studio is in part of the CBS studio at 57th and 11th. So set up your TiVo or whatever you use so you can see the show.

Comment by Mark Johnson on October 31, 2010 at 4:52pm
Congrats! I am happy for you. It sounds like a great experience.

Comment by Chris Klamer on November 1, 2010 at 9:51am
I wasn't looking to sell anything they just needed someone to be on the show with some movie memorabilia for the guy to do an appraisal and they just happened to pick my name off of the website. They wanted people to know that it's not professionals buying and selling this stuff and anyone can do it and also push his new show Hollywood Treasures.

They would have liked me to sell my male/female necklace from the movie "The One" where Jet Li and Carla Gugino both wear half of the necklace and then it has a close up in the movie during the hospital scene where Jet puts his half around Carla's neck and clicks them together to make one necklace. He appraised it at between $3,000 and $6,000 and I paid $65.00 for it. ;-)

Comment by Chris Klamer on November 2, 2010 at 1:15pm
Definitely check your local listings because the air times are even different from North Alabama to South Alabama which range from 10:00 A.M. to 2:00 P.M.

Comment by Chris Klamer on November 3, 2010 at 7:09am
Here are pictures of the mian piece of my collection and my favorite. It's the necklace from the movie "The One" with Jet Li and Carla Gugino and they bothe wear one half of the necklace and here are a few pictures with Carla wearing both halves. 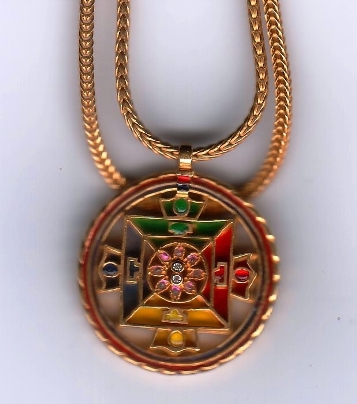 Close up shot and it's the same top you can see the hooks clasp on her shirt. Comment by Chris Klamer on November 8, 2010 at 5:23am
Today is the day that the show will be televised and you will have to check your local listing because it can be on any channel at any time of the day. Locally here it's on at 2 in the afternoon on our local NBC channel but it could be on your local NBC, CBS, ABC or even FOX channel.

Hopefully theye didn't cut me out of the show but they seemed happy with it.

Comment by Chris Klamer on November 10, 2010 at 7:45am
Just wondering did anyone get the chance to catch the show. I did go out and purchase a DVD recorder and recorded the show to a DVD-R but now I have no idea how to make a copy or download it.