Here's a link to my story on Sean Connery.

I do mention autographs, but...only briefly (as I never met him).

I'm surprised there haven't been more pieces of tribute online or on TV but as your wife said he hadn't been seen in a while.

When I first started collecting autographs he was probably in the Marlon Brando realm of rare autographs but not sure now as many "good signers" from the early 2000s turned out to be secretarial users or tough in person and didn't do shows and also how some Brando notes and personalized photos or pieces of paper show up and yet we rarely see Sean items. Again, maybe it had a lot to do with him not being around for a while.

I can honestly say I've never seen a Sean movie, his type of movies just really never interested me. Apparently he was in Robin Hood in 1991 which I saw as a kid but it's been so long I don't remember him. As an autograph collector I was interested in his signed bookplate book that a company was selling years ago. I think it was the publishing company or a store related to the company. They had Bette Midler signed bookplate books too but both wound up being very suspect back then. Considering how tough both were I believe it. I also remember a short period of time, I think 2005 when someone found an "address" for Sean and were getting some personalized autographs which I think were eventually rumored to be fake.

Anyone with personal stories? He seems like someone who might hate doing the crowd autographs but if a random one on one encounter happens I can see him having done it just to get it over with.

I love his signature, too. It's beautiful. I got my signed picture from a friend that got two in person. She sold one to me for $90.

Speaking of which..I have 3 signed Bette Midler albums if ya want to buy one, contact me.

Got this a long time ago, Josh! 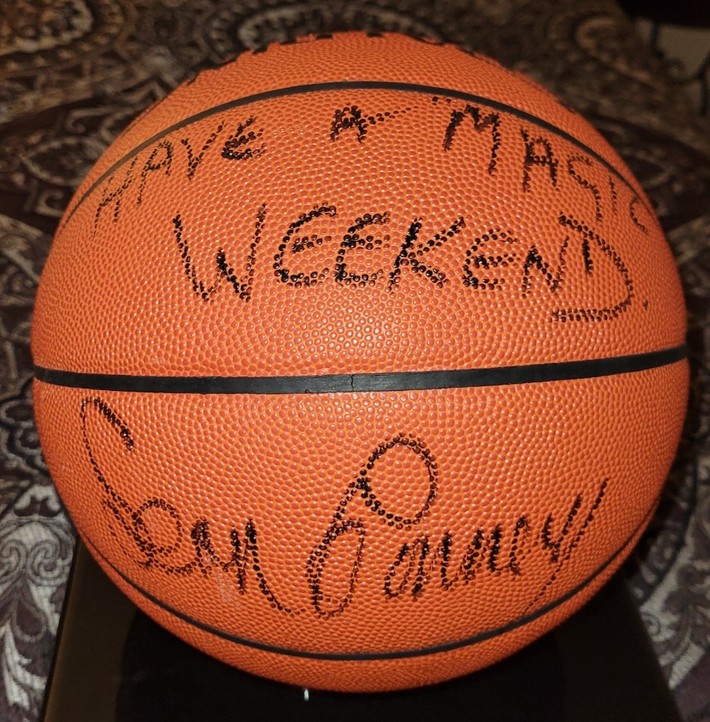 That ball is amazing, Bob. What is the circumstances in which it was signed? An Orlando Magic game?

He was at a fundraiser sponsered by Magic Johnson in LA. I wanted Magic to sign it but he wouldn't.

I eventually was in a position that I didn't expect, Sir Sean Connery was there before me so I asked him to sign the ball.

So glad I did!