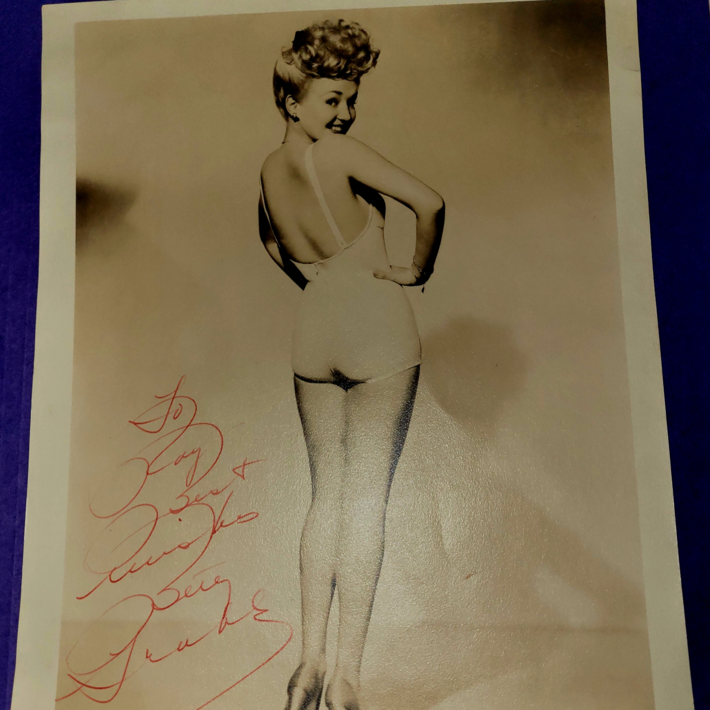 A Sean Connery in person from the 90's.

Bob Oliver commented on Josh Board's status
"I had pretty good experience in photographing through glass and plastic. You cannot use a flash and distance is imperative to get clarity. It can be done.  Your profit margin at a grand would be great,  but you should get the premium you…"
Sep 22, 2022

Bob Oliver commented on Bob Oliver's status
"It worked this time! The most famous photograph she ever made!"
Sep 21, 2022

Bob Oliver commented on Bob Oliver's status
"Thanks Jason.I will check it out! Bob"
Sep 21, 2022

Jason H commented on Bob Oliver's status
"I occasionally have issues trying to post while using chrome.. when it happens, I switch to Firefox and never had a problem there"
Sep 21, 2022

Bob Oliver replied to Steverino's discussion JAMES and JIMMY STEWART - Are These TTM Photos OK?
"They appear good to me! Been collecting J. Stewart for many years! He was known  for going into his office and personally answering his mail. "
Sep 21, 2022

Bob Oliver replied to Noni Alaniz's discussion Betty Grable autograph real or not?
"It looks good to me!"
Sep 21, 2022

What kind of member are you? (Check as many as apply.)
Collector, Fan

What would you like to tell us about yourself, your collecting, or business.
I collect music, vintage movie and TV.

Why do you want to join Autograph Live?
I love autographs!!

Who can we thank for telling you about us?
Steve Cyrkin

What are your areas of interest?
History/Politics, Classic Hollywood and Stage, Music, Space/Aviation/Military

Why do you collect?
The history of the signature and lots of fun

What is your favorite autograph in your collection?
Jimmy Stewart-Harvey drawing!

it editors and producers.  It's all editors to me.  I can add a few more details

for you.  George Boemler, standing, was an editor at MGM for about 35 years.

He was nominated for Academy Award for OKLAHOMA, 1955.  Frank Sullivan

Chertok's shorts dept. there in 1938.  So with Cotton Warburton and Jim Newcom

you've now ID'd 5 of the guys.  This was the "Cutters Alley" softball crew at MGM

Studios.  Hope this helps you to enjoy it more.  Bill Baldwin