I can take or leave the band Kiss. I have a few of their albums, a few of their CDs, and as a kid always made fun of any of anybody that dressed as one of them on Halloween. That’s why it makes it so much more frustrating when I didn’t get guitarist Ace Frehley’s autograph. You see, as an autograph collector, the two most frustrating autograph attempts are: A) the person you’re a huge fan of, that declined to sign or that you missed by a few minutes B) the person you’re not that big a fan of, but you decide to go get something signed because it’s at a venue you know will be an easy score; and then it doesn’t happen.

Tom Petty was one of my frustrating ones. I’m a big fan, and I waited for three hours outside of the venue at San Diego State University. I was wearing my “Damn the Torpedoes” shirt, so he’d know I’m a fan and not just somebody that’s going to sell his signed album on eBay.

When I worked in radio years earlier, he had done an interview in the afternoon. It wasn’t planned, he just stopped in to the studio. I wasn’t there, but he signed many copies of his first solo record “Full Moon Fever.” Everyone at the station…DJs, salesmen, secretaries, all got a copy. I didn’t. I wasn’t there that afternoon. It still bugs me to this day.

Anyway, he and his band showed up at SDSU, climbed out of a white van, and looked high as kites. There were two men and two women waiting nearby, also waiting for autographs.

Petty walked by us smiling, but didn’t stop to sign. One of the fans got the drummer to sign. He was a guy named Steve Ferrone that played in the Average White Band, and it wasn’t until this guy talked about a song of theirs he loved, that he came over. He didn’t play on the records I had, so I didn’t get him to sign. He did share some good stories with us, and it was a fun chat. But seriously – we were there for a Petty autograph, not stories from a drummer that joined them in the early 90s. Just as I was walking away, I saw guitarist Mike Campbell get out of another vehicle. His long, black curly locks are hard to miss. I walked over and said, “Oh Mike, hey…I’m looking forward to the show tonight. Do you have time to sign my album?”

He didn’t look stoned. He just looked angry. He didn’t say anything, but stared at me as he walked into the gate.

But back to Ace Frehley. The only reason I went to get his autograph is because my friend is a huge Kiss fan. He doesn’t usually do the autograph thing, but I told him at the House of Blues, there’s a side entrance where it would be easy to score. He brought a few albums, and I brought the two Kiss CDs that Gene Simmons had signed (see one of my previous blogs for those dirty details – it involved a story with Gene’s tongue and my mom, and a lot of blondes surrounding us).

We were waiting for 15 minutes and I walked to a nearby 7-11 for a Big Gulp. When I was in there, he pulled up in a black sports car (either a Porsche or Corvette, I forget which). He told the 10 other fans, “I’ll sign when I come out, after the sound check.”

I was happy to hear I didn’t miss anything.

Well, he had his dad with him. One of the fans started talking with the dad for a long time. After about 20 minutes of them chatting, the dad said “Come on. I’ll bring you backstage, and you can watch him sound check and get your stuff signed.”

Damn! That’s usually my move, but it’s other band members or roadies I usually chat up. I’ve never jumped on a family member. I’d have to remember that.

Anyway, it was an hour and 20 minutes later when I realized I needed to go put more change in the parking meter. I had to walk four blocks to do it. As I was walking back, I saw Frehley signing freely, from the seat of his car. The fans were surrounding it, and he was reaching through the window signing away. I started running, but was still about 500 feet away when he finished and drove off.

My friend got his solo album signed, so I was happy for him. Especially since that’s the main reason I went; but the more I thought about it, the angrier I got. I went for an autograph of somebody I didn’t care about, and instead ended up wasting my time!

The fans all said he told them, “Only one autograph each.” And it looked like he didn’t do his usual signature of his name, that included an ace playing card.

That happened a few years ago, but I thought about it recently because Frehley just bought a house in my town of San Diego. And on the news a few nights ago, they said his house in New York burned down. My immediate thought was, “Why did he invite Gene Simmons over? The guy always spits fire in concert, who knows what happened when he did that at his place. One wrong move and the curtains go up in flames.”

Yet, it all sounds a lot more suspicious than that. The lenders had initiated foreclosure proceedings earlier in the year, so…we’ll see what happens.

My CD of Kiss looks incomplete with Gene’s autograph, but who knows. When those guys do solo shows they’ll probably sign. I’ll just be smart enough to make my friend drive and worry about the parking. 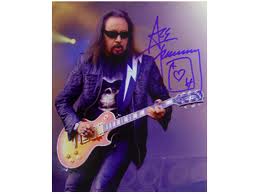 nice story josh! have you ever gotten bruce kulick who used to be a guitarist for kiss i believe?

Always enjoy the stories. I used to stand outside the Keswick theater in glenside Pa years ago and got quite a few autographs. Its not a big venue so most of the musicians are in the twilight of their careers. In the last few years or so the security has been more aggresive and block you from getting at them {its an alleyway so they pull a van up and just cut you off}. Waited for Burton Cummings to come out in the freezing cold and his bus driver told us your wasting your time he wont sign. Thats the last time I bothered there.

anyone have any through the mail with original members of kiss. my wife and I are huge fans and  i am seriously trying to get one photo signed of the group. it would be a great anniversary  gift for her

Darrel -- it's tough doing a photo that you send to various people. First, you might have a secretarial signature (especially with somebody like Gene, that has many side businesses going). Two, what if you have Paul and Gene signatures on it. That's like having Paul and John on a Beatles record. Would you then feel safe sending it to Ringo? Things get "lost" in the mail, and...it's really tough doing it this way. I'd strongly advise against it.

Oh, I remembered, I also got drummer Eric Singer on one of the KISS CDs. That's written about in my latest blog. Be on the look-out for it!!!

great story but the lesson learned is it seems everytime you decide to walk away things happen.. DONT WALK AWAY lmao

Blake...you don't know how true that is!!! Okay, you just gave me a great idea. I'm going to do a blog on all the people I missed when I walked away. Seriously, it'll be a great story. I got at last 10 big names that that's happened with!