It’s a shame that even after the great movie The Imitation Game (my review here: http://fox5sandiego.com/2014/12/23/the-imitation-game/ ), Alan Turing isn’t a household name. Well, even if he’s not, it didn’t hurt the bidding from Bonhams in New York. His handwritten notebook just went for over $1 million.

He’s the guy credited with inventing the computer (sorry Al Gore), and he helped crack the German’s Enigma code and saved millions of lives by doing that.

The notes are from 1942, and went to mathematician Robin Gandy after Turing’s death.

Gandy gave the papers to the Archive Centre at King’s College in Cambridge in the mid-70s.

The notebook was over 50 pages long, and even contains a person message to Gandy.

I’d still rather have the notebook of Jim Morrison’s poetry that he threw out before The Doors got big…or a notebook from Einstein. Now, if it was one of the machines Turing created…that would be a cool item to have sitting in the living room. 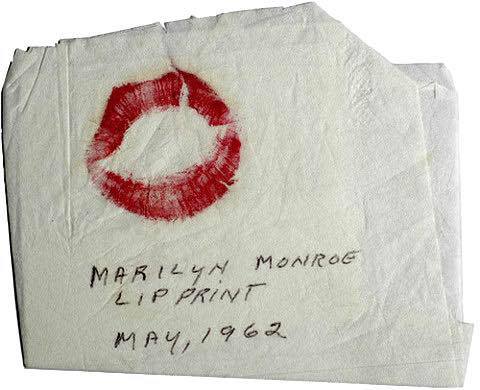 Now, I don’t know why that made me think of this, but…it seems in the ‘40s and ‘50s, a lot of starlets would kiss a napkin and give their lip prints to fans. Yet I’ve never seen one of those pop up in an auction anywhere. I’m guessing there are a handful with a signature from somebody like Marilyn Monroe, and without that nobody would believe the authenticity of the lip print.

There was a charity in 2008 that had many famous actors and actresses sign their lip prints, but I’m more curious about the starlets from the ‘50s. Anybody ever see lip prints sell anywhere before?