There are many great things about living in San Diego, but for fans of autograph collecting, one of them is the many opportunities the residents all had to meet Mr. Padre – Tony Gwynn. The Hall of Famer passed away last year, which was heartbreaking for this city; especially since it came on the heels of Mr. Charger – Junior Seau, killing himself.

Gwynn would sign for everyone, but sometimes snapped at people at the games that had 20 different photos.

A friend of mine that’s a cop said his partner got snapped at when they approached him in a parking lot and the officer asked “Hey man, give me your autograph!” Gwynn sternly said, “How about a ‘please’?”

Anyway, if you’re a fan of one of the greatest hitters in the sport, you’ll be interested to know about this auction. It’s perfect timing with the baseball season starting.

Laguna Nigel auction house “SCP auctions” has 105 different one-of-a-kind items from Gwynn’s personal collection. There are lots of jerseys. My favorite being his basketball uniform from San Diego State, where he still holds the record for most assists (Tony Gwynn fun fact: He was also drafted in the NBA, by the San Diego Clippers; most feel he made the right choice sticking with baseball).

For country music fans, they’ll be interested in the Garth Brooks acoustic guitar. There were a few seasons where the Padres did this weird thing that involved Brooks playing for the Pads during spring training. Anyway, it’s inscribed “Tony, thanks for making time for the kids, you are too cool man. God Bless – Garth Brooks.”

It’ll be cool if a guy named Tony wins that.

I’ve always loved contracts. I have a handful in my collection. My favorite is one from Sam Cooke, one of the best voices in music history. 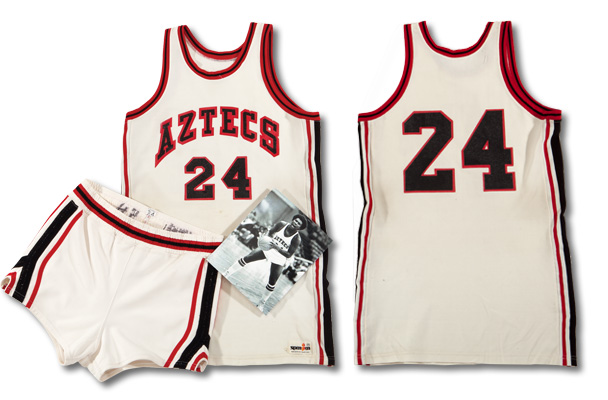 Recently, former NBA player Hot Rod Hudley died. He had been an announcer for the Utah Jazz, and when I went to his sports bar in Salt Lake City, I saw his first NBA contract. It said something about how for every 5 pounds he weighs over 185, he’d be fined $20.

That was off topic a bit, but the fact that this auction has the first contract Gwynn signed, made me think of it.

It’s amazing to think that this contract, from June 16, 1981, pays him $7,200 a year. For the best hitter in the sport, that’s a steal. It’s crazy to think that the amount he made that year is probably less than the contract will sell for at this auction!

Since it’s not like this is Babe Ruth or Ty Cobb, with scarce and old baseball memorabilia, some of these items have a starting bid as low as $100. And the best part is that this benefits the Alicia Gwynn Foundation, which helps troubled youth. Nothing like getting a nice piece of memorabilia that’s a tax write-off, especially with April 15th right around the corner.

The auction goes for another few weeks, I believe. If you’re interested, here’s the link:

I would have to win that guitar it has my name on it.