She thought it was cute and of course, signed the autograph for him (she’s always been a good signer). She did mention how he spelled her name wrong on the sign, which got Letterman and the crowd laughing. The other funny autograph story happened at the Masters. The world’s #1 golfer – Rory McIlroy – is no stranger to being asked for autographs. This time, though…it was his caddie that was getting hit up more than him. That’s because his caddie was Niall Horan. Perhaps that’s not a household name to anybody over 30, but he’s the Irishman that’s a member of the band One Direction.

Since Tiger Woods had his two kids serving as his caddies, you wonder if they are One Direction fans. And, since Woods has always been tough with autograph requests (even a pro golfer on the tour was turned down by him once)…I’d like to see a time come when his children ask a famous person for a signature and get blown off.

Now, onto some serious memorabilia action. 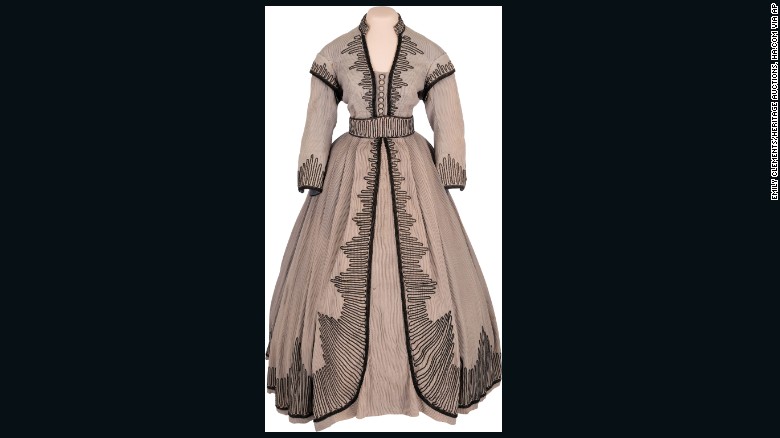 A dress that Vivien Leigh wore while playing Scarlett O’Hara in Gone With The Wind, has sold for $137,000 at Heritage Auctions. I know, I know…I didn’t really give a damn either. It was fun to hear that the collector bought it decades ago for a mere $20, and it almost got thrown out.

A guy that worked at Universal Studios came across it in the ‘60s while doing work for a costume company.

It was on the floor and he noticed the label stated “Selznick International Pictures” and “Scarlett production dress.”

He asked to buy it, and they sold it. As all collectors understand, things can snowball from there. He ended up getting a hat Leigh wore in a few scenes, and a wool suit Clark Gable was sporting.

Since the dress is rather old (the movie was released in 1939), it’s a bit faded. It used to be blue-gray, but has faded to a light gray (although if you post pictures on the internet…there might be millions that claim it’s blue and yellow, who knows).

Now, the item I did give a damn about, but can’t believe the price it got – song lyrics. Those are in my wheelhouse. The Don McLean song “American Pie” had 16 pages of handwritten lyrics. Yet hearing that it sold for $1.5 million blew me away. I don’t care how popular the song is, McLean is still alive! He might have a nephew that asks him to handwrite all the lyrics. Sure, those wouldn’t be original. The original pages had been sitting in a box in his house.

To put this all into perspective, that price is more than John Lennon’s lyrics to “A Day in the Life” went for. And that’s a friggin Beatles song!!!! I was the purchaser of the Vivian Leigh dress.  I am having it made into curtains.

^  That is hysterical, Mr. Paul. My friend Rosemary Watson is the best Hillary Clinton impersonator around (she recently did a bit on Letterman, too). I wrote a bit for her to do at a Carol Burnett tribute thing. I told her to come out wearing the curtains, the way Burnett did in that Gone With the Wind parody. The line I wrote was for her to say "I didn't wear this as a tribute to that great Carol sketch on the Carol Burnett Show. It was just the only outfit I found that didn't make my butt look fat."

She didn't use the line.