There’s a scene early in the movie where Adaline needs some fake IDs. She goes to a kid that’s living with his parents. He’s got a few autographed baseballs that she glances at. At first I thought she was going to say, “Oh, Willie Mays. I saw him make that incredible catch.”

Instead, she sees that they’re personalized (every autograph collector cringes at that). So when the kid says he’s name is Tony, she replies “Your name is Jeff. I see it on the autographed baseballs. Stop getting sloppy, or you’ll end up getting caught.”

She also lectures him about how he’s wasting his talent on illegal activity.

I was a little disappointed with that scene because, you couldn’t read the players signatures. It’s always fun when they use real autographs, or at least get ones that look authentic for us collectors. 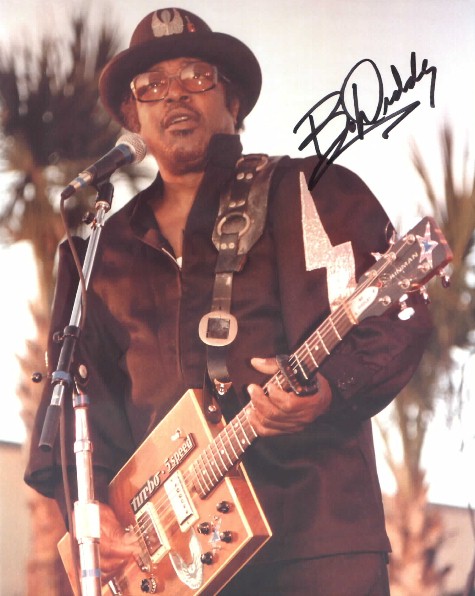 In one of our local papers here in San Diego, there was a story about a legendary record store closing.  Folk Art Rare Records has been around since the early ‘70s. One of the customers was Tom Waits, who would eventually find fame as a singer (and has been in many movies).

The story about it closing was heartbreaking enough, but even more so when I read about a few thefts. Now, it’s always a blast when you go into any record store and look at the memorabilia on the walls. It’s frustrating when those items aren’t for sale! Well, the owner came into the store one day and noticed a framed guitar pick of Bo Diddley was missing. The previous owner (Lou Curtiss) had gotten it after a show in 1959. Apparently, some rare posters had been taken as well. Those include Jimmy Reed, BB King/Joe Turner, and a poster/photo of Billie Holiday. There were some autographed items stolen, too. Photos of Lightnin’ Hopkins and Clarence Gatemouth Brown were signed, and taken. Now, the biggest autographed story happening right now is the one involving basketball great Michael Jordan. An autographed pair of shoes he wore in his rookie season went for $71,553. That’s the second highest ever paid for a pair of his kicks ($104,000 was the most).

When the story first broke about a former Lakers ball boy (Khalid Ali) putting this up for auction, I wondered what Jordan would think about that.

Perhaps Jordan won’t mind, when he realizes the guy is going to donate some of the money to various youth ministries. Ali, a project coordinator for Los Angeles economic and workforce development, said the shoes were just sitting in a closet and he didn’t really care about them.

Ali did say he wasn’t a fan when Jordan’s Tar Heels beat his favorite team – the Georgetown Hoyas, in the NCAA finals. He also said meeting Jordan was a bigger thrill than owning a pair of his shoes.

I took a lot of flak for saying this before, but I’ll say it again. If I had the opportunity to meet John Lennon and talk to him for a few minutes…versus not meeting him but having him autograph my “Imagine” album…I’d take the signed album every time. Josh- that's a tough one.  If the autograph was signed in person, where he actually took the Imagine lp and signed it in front of me, I would want the album.  However, if I got to talk with Lennon for a few minutes vs. someone giving me an authentic album that I didn't see signed, I would take the conversation.

Good point, Coachgd. Let's change it to this. Paul McCartney GAVE you the album, so you don't doubt it's authenticity. What then?

My point is...I've met so many of my idols. And very rarely, did I say something to them that they probably hadn't heard a billion times.

Yes, I would take the signed lp given by McCartney over a 3-4 minute conversation.  If I had the conversation with him, I would probably end up acting like Chris Farley.  "Do you remember when you were in the Beatles? .... that was awesome!"

That was such a funny bit. Then he asks "Is it true that...the love you make is equal to the love you take" or whatever.