You hate when the news is turned on, or you open the newspaper, and it’s filled with bad news. You sometimes think of the cliche “If it bleeds, it leads.” But there was a story in the San Diego Union-Tribune the other day that warmed my heart. I was even more thrilled when I saw the byline. It was written by a friend of mine named Karen Pearlman.

There’s a teenager here (El Cajon area) named Ryan Wilcox, and he’s battling leukemia. He’s a huge Marvel Comics fan. The 18-year-old is a junior at Grossmont High and he’s been isolated at home for months, undergoing rigorous chemotherapy, as well as blood and marrow transfusions. Perhaps this isn’t the right place to mention it, but...I’ve donated 20 gallons of blood to the San Diego Blood Bank, and was a bone marrow donor for somebody as well. I recommend everyone do the same, and save some lives. But, off my soap box and back to the story.

A few months ago, Captain America star Chris Evans made a personal video thanking Ryan for supporting the Marvel films, and encouraging the teen in his “fight.” This came about after various social media and outreach from Grossmont high administrators, and it was played during a lunchtime rally at the school.

That probably would’ve been enough, but Gwyneth Paltrow -- who I’ve never been a fan of until now -- rallied the troops. She’s a mom (remember “Apple”?). She thought it must be horrible to deal with what these parents are dealing with, and she got Chris Evans and his rival on screen, Iron Man (Robert Downey, Jr, for those not in the know). They flew into town and surprised the teen at his home.

The trio of superheroes were true heroes, showing up with various gifts. They also signed Ryan’s bedroom wall. When I talked to Karen about that, she pointed out, “Since he’s bedridden a lot of the times, it’s great that he can look up and see all of that on his wall.”

I couldn’t agree more, which is one of the reasons I spent almost 20 years volunteering for the Make-a-Wish Foundation (side note: why is this story starting to feel like I’m patting myself on the back?)

They talked to him about the movies, posed for photos, and signed a lot of his other memorabilia as well.

I think it’s awesome that Ryan had no qualms about saying his favorite superhero was Captain America. No word on if he was quick to tell Downey Jr, “But Iron Man is my second favorite!” The Wilcox family has three daughters as well, and they were there for the surprise to (the parents were given the heads-up).

Paltrow recorded Ryan’s reaction as he answered the door, and sent the couple the video. I tear up just thinking about such a kind gesture. She also said, “This was from one mom to another.” 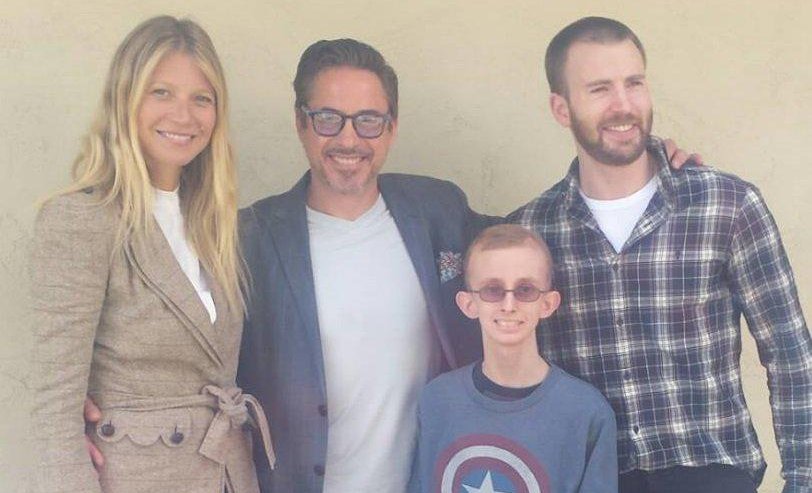 I teared up myself.  What a great thing for them to do!!!!