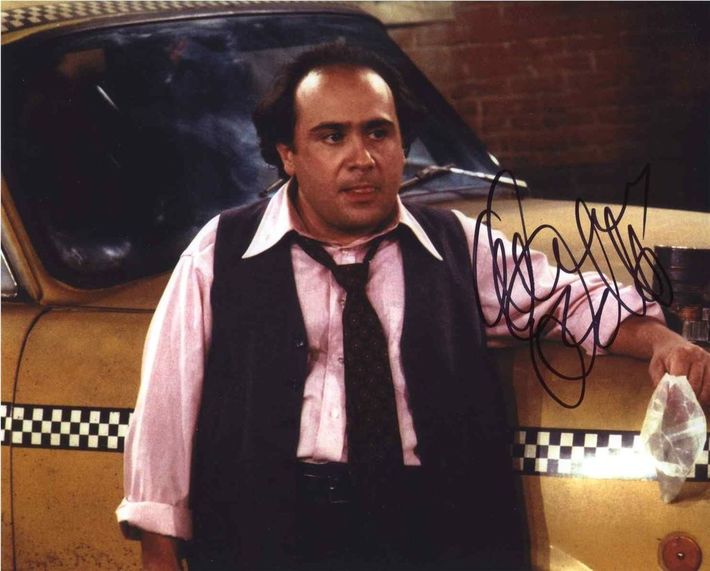 I was watching Danny DeVito on The Talk today (can somebody explain to me why these talk shows with all women are so popular? Both "The Talk" and "The View" are just awful). Anyway, his new movie "Dumbo" looks great. And, he was in my favorite sitcom of all-time -- Taxi. He started talking about the show and he said how he had a lot of stuff around him that a boss would have in their office space. Little knick-knacks that were personal to him. Well, one of those things was an autographed Robert De Niro picture. He said he was a huge fan, and sent him something asking for an autographed picture but asked him to make it out to "Louie" -- his character name. He talked about how since they were at a Taxi dispatch, and De Niro did "Taxi Driver" -- he thought it was perfect. And someone on the show asked exactly what I was thinking.

"Do you still have the photo?"

He laughed and said he has that and lots of memorabilia, he's just not sure where it all is.

Now, on to Steph Curry. I've been playing basketball for 40 years, and I know everything about the sport. He's easily the best outside shooter the game has ever seen. I just hate him, because he is a showboat, and dances around after scoring buckets. I think about how much cooler it was when Larry Bird, Reggie Miller, Abdul-Rauf, or Steve Kerr were when they drained a 3-pointer and just ran back down court. It's amazing that his coach, who is Steve Kerr, hasn't pulled him aside and told him what a dope he looks like when he shimmies and dances around.

The one thing I like about Curry is how great he is to charities, children, and the disabled. I've seen so many heartwarming things he's done over the years. Here's the latest video:

"(can somebody explain to me why these talk shows with all women are so popular? Both "The Talk" and "The View" are just awful)"

No, I can't. All of them are like nails on a chalkboard. Especially, Joy Behar.

The crazy thing is, I've done podcasts and radio shows, with multiple people -- and they're funny. Everyone is riffing and coming up with interesting points. The Talk...is better than The View, but not by much. It makes me wonder...if they have any consultant or someone, that watches the show, and tells them what they can do to make it better.

The times I watch Bill Maher -- he and his guests do a better job of being thought provoking and funny.

I'm a Cavs fan, and don't like Curry as a player either.  But as a person, he randomly donated a lot of money to my cousins Go Fund Me page when she battled cancer and she couldn't work.  He kind of knew her husband, but they weren't close.  True story, it helped her get to her goal $ she needed.  You have to respect that.

That...is a wonderful story, Lynn. And, I hope your cousin is doing better.

"All of them are like nails on a chalkboard" haha you got that right.