Most younger folks (those under 40) probably only know Dick Dale from his great tune “Misirlou” being used to start Pulp Fiction off; or, they know the song that samples it by the Black Eyed Peas (in a concert I saw once, Dale said that Black Eyed Peas song made him enough money to buy a room edition on his home).

Those of us old fogies, or guitar lovers, know Dale as the “King of the Surf Guitar.” I was saddened to be at a St. Patrick’s Day celebration, and hear that he died at 81. Although, the last three times I saw him live, he talked about his various cancers and health issues. He also brought it up when I interviewed him about 10 years ago (we were supposed to do a 15 minute interview, and we ended up talking for an hour and a half).

Some people called Dale the “father of heavy metal” but...that’s rather silly. Not that I want this to become a debate about that. 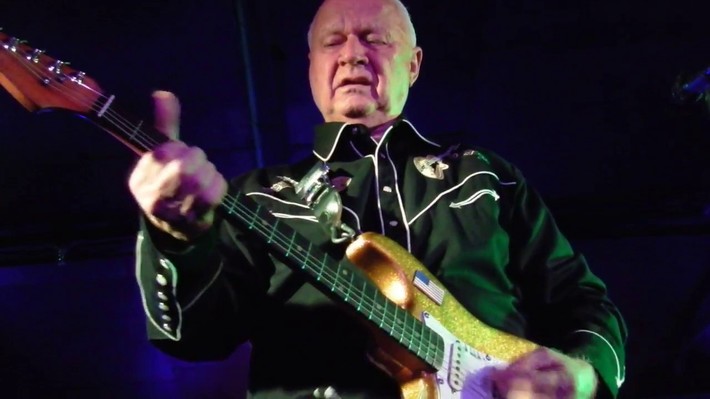 I loved the Middle Eastern, surf, punk vibe his guitar riffs sounded like to me, much like Link Wray and a handful of others, that for some reason, aren’t household names for people that aren’t guitar lovers.

Dale worked with Leo Fender to create a guitar that could handle the aggressive nature he played, as well as amplifiers that went to 11 before there was a Spinal Tap.

Dale only had one son, Jimmy, and for anybody lucky enough to see him in the last 15 years, you probably caught him on stage with his proud papa. I was lucky enough to have seen the father/son team play together twice. His wife Lana was their manager.

I can’t find the interview with him or I would post the recording of it here. The things I remember from it, was his talk about loving to surf; there was a story he told about hanging out with Elvis in the early ‘60s (at that time, Dick Dale and the Del-Tones were on the charts). Elvis was driving a Porsche about 100 mph when a cop pulled him over. As the officer angrily walked to the car, he stopped and said, “Wait, you’re Elvis Presley!” And as Elvis smiled, the cop looked over and said, “And you’re Dick Dale!”

They didn’t get a ticket. 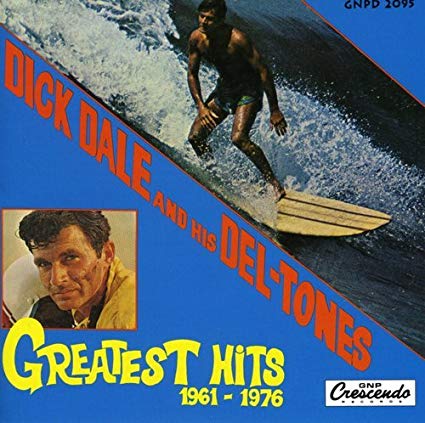 After the interview, I asked him to sign his “Greatest Hits” album (that has a picture of him surfing on the cover). It was the only record of his I owned and as he looked at it he started losing his temper. He said, “Oh man, no! I can’t sign this. It’s a bootleg!”

He then went into a long explanation about how just because you may buy an album or CD at a record store, doesn’t mean it wasn’t made illegally. He showed me the label of the company that made it, which wasn’t his record label. And after a 15 minute explanation he said, “I’ll sign this for you anyway, but I don’t usually do that.”

I then asked him some questions about bootlegs, autographs and memorabilia. Since he’s always been good at signing autographs at his shows, and I’ve never seen him turn down a fan, he said only one thing upsets him. And that was when he saw his autographs appear on eBay, after he signed a bunch of albums for one person who claimed to be a big fan. He said people also tried to sell stuff at auctions and ebay, like broken strings of his that they got off stage. Sometimes it was guitars they claimed he played, that he had never touched. He even told me he had contacted eBay to tell them the stuff was fake, but that they didn’t care and let the sale go on anyway.

Anyway, the music world lost a legend. I like to think he’s up there riding around with Elvis again. And maybe he can do a show with one of the guys that was a big fan of his -- Jimi Hendrix. 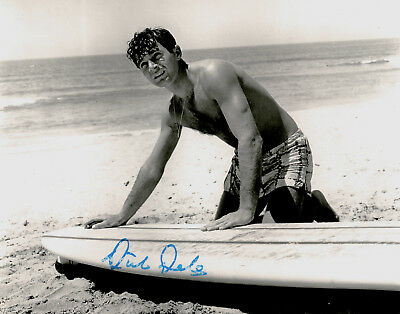 Loudest front row experiences of my life!   I saw him twice in the late 90's - once with son Jimmy on drums for a bit.   He signed my ticket stub, and answered "Mind over matter" when I asked if he'd lost any speed through the years. (Ironically I am now a 40+ year old runner)

I know where you're coming from Gregory. A mate of mine needed medical treatment for his hearing after seeing Dick Dale in Zurich!