It’s hard to pick your favorite role of his, because so many were great. Here in San Diego, most locals would pick his Ice Man character in “Top Gun” since it was filmed here.

I just recently saw “Tombstone” for the first time. He was good in that.

“Heat” was known for being the first movie that had Al Pacino and Robert De Niro in a scene together. Well, Kilmer wasn’t chopped liver in that.

I always thought his movie that Ron Howard directed, “Willow”, was underrated.

I saw his turn as Batman, but honestly, don’t remember it. I barely remember when Clooney played the caped crusader, either.

He’s the only guy to play two musical superstars -- Jim Morrison and Elvis (in the first Tarantino script, the underrated “True Romance”). The first time I saw Kilmer in person was at Comic Con over 10 years ago. He was selling autographs for $25 each. There was a huge line, and I didn’t feel like paying. Especially since my favorite band -- The Doors -- well, it wasn’t my favorite movie. It was rather disappointing. Yet it wasn’t nearly as disappointing as the experience I had with Mr. Kilmer tonight.

He was screening the film of a stage play he did called “Citizen Twain”. You could get tickets to see that, or VIP tickets (which included drinks and desserts), or the meet-and-greet package, which was $100.

I couldn’t find The Doors DVD I had, I think because I gave the movie away. So we stopped first at a video store to buy Top Gun. I noticed his movie “The Saint,” and we got that, too. I figured, my wife and I could each get one signed.

When Kilmer walked into the event, everyone was snapping photos. It wasn’t too out of hand, though. He stopped to bend down and take a photo with a guy in a wheelchair, and it looked like he autographed something for him. I didn’t want to be pushy, and having a “meet-and-greet” ticket, I didn’t feel it was necessary to rush him.

Yet after he took a few photos with some people and some products, I found myself right near him. I pulled out the Saint DVD and asked him to sign it. He pointed to the elevator, which had just opened up. He didn’t sign, and went upstairs to the movie.

People were saying he wasn’t talking because of his recent surgery due to throat cancer. He was also wearing a scarf/bandana around his throat. That made me wonder how he completed his scenes for Top Gun 2 recently. It also made me wonder how he would do the Q&A he was supposed to do with the always entertaining and immensely talented Scott Mantz of Access Hollywood.

Well, we sat through this Citizen Twain, which was torture. He tried to make Mark Twain more of a stand-up comedian, and with a more modern touch. It was an hour and a half, but felt like three. It had a few funny scenes, but it just lacked coherence. Also, the fact that so much of this is spent “apologizing” to Mary Baker Eddy, only made sense to me because before the event, someone was talking about Kilmer being a Christian Scientist (she’s the founder of that religion). It would’ve been a bit more interesting if he delved into other aspects of Twain. For instance, he was friends with P.T. Barnum. Anyway, the crowd was excited to see the Q&A and perhaps ask Kilmer a question. Well, he couldn’t talk. Yet it was never told to the crowd why he couldn’t talk. I remembered a few years ago seeing videos of his speech sounding belabored. So, Mantz did his best asking questions, and Kilmer would just smile and nod his head, and his assistant would answer for him. Sometimes that meant reading what Kilmer typed, but usually it was just his guess on what Kilmer would’ve said. It was easily the weirdest Q&A anybody has probably ever seen. One person sitting behind me said, “It’s like they’re dealing with a person that has special needs. This is so bizarre.”

But hey -- we were going to go to the meet-and-greet with Kilmer, and get autographs and take photos.

The desserts were being set out, but my wife and I went to where the line was forming. We were told that no flash photography was allowed, and there was a woman there that would take the photo with your cell phone.

After waiting 15 minutes, he came over and sat down. It’s always a weird photo when a person is sitting and you have to bend over. Those are the worst at book signings, when people try to lean over the table, too.

My wife told me, “I’ll go first. He’s more likely to sign an autograph for a woman.”

She approached him and said, “I’ve studied Mary Baker Eddy” and he immediately put his arms out to hug her. She then said a few other things to him, and asked if he’d sign the Saint DVD. He said no. They took their photo, and I was up next. I pointed to the Doors shirt I was wearing and said, “You did a good job playing Morrison, but the movie I loved was ‘Kiss Kiss, Bang Bang’ [Robert Downey, Jr.]. He smiled. We took the photo and I said, “Can you sign my Top Gun DVD?”

He nodded his head no, so...I walked away so the next person in line could get a photo with him. 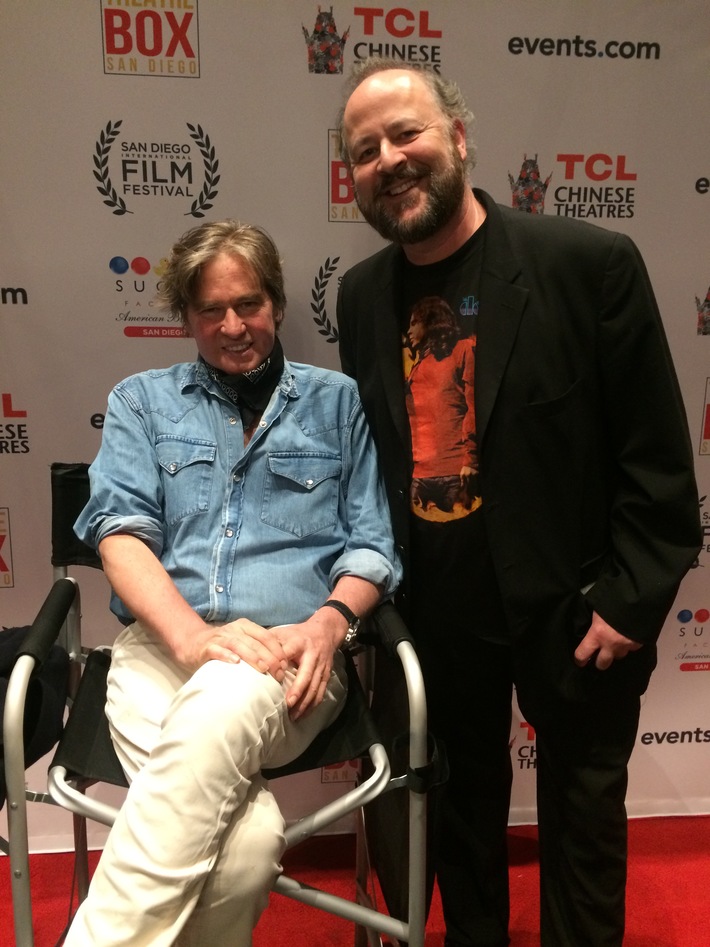 Seriously, how money-grubbing is Kilmer? He’s here promoting his movie, he can’t talk to anyone, but arranged to do a $100 “meet-and-greet.” Well, if he can’t have a conversation with anyone, the least he could do is sign some autographs. And if somebody showed up with a bunch of 8x10’s, he could limit them to just one signed photo. But ya know one of the reasons he probably did this? Well, he had a table set up with 8x10s from all his movies, that were autographed. For the whopping price of $80 each. Or, you could buy one of his crappy stencilled pieces of art for a lot more. There were also replica hats from Tombstone that were signed. Those would set you back $895.

So, you go to a meet-and-greet that people paid $100 each for, and another $30 for the movie ticket, VIP area -- and you get a picture with Val Kilmer, who can’t talk and looks horrible. It was a disaster.

If any of you have the chance to see his film Citizen Twain, save yourself some time, and avoid it. You’re better off reading one of Twain’s books.

Man, Val isn't looking too good. Pretty crappy that he wouldn't sign, but actors are weird. Loved him in Heat, Wonderland, Top Gun, and Tombstone.

you should have said after he said no  but u look like s*** and u might die before I ever get you.

I actualy told an artist who wouldn't sign an event poster after 3 days at his hotel  as he was getting in his limo to go to the airport all 30 other musicains signed at the hotel as they were staying in one location as a celebration of life to this artist and he still said no and I said but if the plane crashes ill never et then.

I thought about standing there and saying, "Dude...everyone paid money, and we can't even hear your dumb ass talk, or comment on what we're telling you about the movies we like. The least you can do is sign."  But, I knew my wife would be mad at me for causing a scene. Or, I should've said, "So...you want us to spend $80 on your 8x10s, but you can't sign a DVD? How about if I give your cheap ass the $80, would you sign my DVD?" Just to make him feel awkward about it all.

josh that's something I would have done, I would have started a negotionation or threaten a charge back on my credit card due to fact he cant talk.lol

i have no problem if the only way he signs is for money just be upfront, or anyone  hell i would rather pay a nominal  fee than sleeping out side a hotel any day

out in vegas rich little has a residency he signs every night right after real fair rules if u buy something he will sign it and free photo with u go first  .if not please make a small donation and he will do a photo with  and sign all money goes to charity I belive its the veterans,

very fair I belive i gave 5$ they were very happy he was supper nice.

all merchandise money goes to charity

Nancy Sinatra was signing everything for free after her show, and was selling her new CD for $5. It was a win-win, because...we all had an album or two we wanted signed, and...I bought the new CD which she signed (and her drummer, who was Elvis Costello's long-time drummer).  It was all so bizarre.

Also, how are you just now seeing Tombstone?

Hahhahaha....that's why one of my cigar buddies made me come over to his house and watch it while we drank whiskey and smoked cigars. It's basically because...I don't like Westerns. I mean, I say that, but...I liked High Noon, Shane, The Man Who Shot Liberty Valance...and more recently Unforgiven. But, those westerns int the late 80s, 90s....I was just so burned out on the idea of these Hollywood all-star casts (the quick and the dead, tombstone, all of those films). And I have to say....Tombstone was good (Powers Boothe surprised the hell out of me), but I don't feel like it was anything all that special.