It was Valentine’s Day a few weeks ago. All of us men bought are women flowers, chocolate, and wrote really sweet things in the card (or at least the person working for Hallmark did).

Yet I can only recall, of all the people I know, one wife ever stepping up. It was a friend I have known for 30 years, and his wife knows he loves collecting baseball memorabilia. She bought him a check that was signed by Hall of Famer Dizzy Dean. For some reason, when he was opening it, the check got ripped in half. Perhaps his wife shouldn’t have just put it in an envelope, without it being inside a card or something.

I remember being in Las Vegas a few months later, and his wife had a birthday coming up. I had purchased an Elvis Presley gold record years earlier, and his wife always admired it when she was at my house (wait, that sounded bad, didn’t it?). I told him that at a place selling memorabilia. They had an Elvis gold plated 45 that was relatively cheap. I think he passed on it. He was content with just getting a bouquet of flowers at the local grocery store. 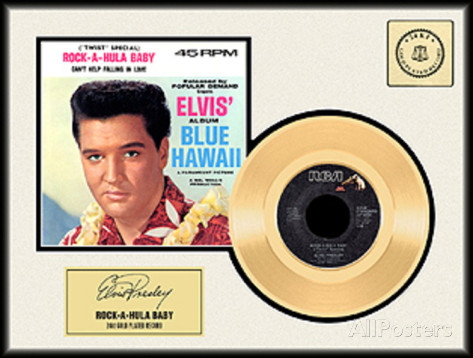 It got me thinking – how often do your spouses buy you autographed items? I want to hear your stories. I’ve never had a girlfriend buy me a signed item, although I’ve gotten them signed items from their favorite singers or actors.

Now recently, a pair of boxing gloves worn by Muhammad Ali in his infamous fight with Sonny Liston, which created the best photo in boxing history, would’ve been the perfect gift.

The gloves sold for almost a million dollars. I heard about a Vince Lombardi sweater that was at a swap meet or somewhere. It sold for $5, and the person that bought it found proof that Lombardi wore the thing. It’s now expected to catch a big amount in auction.

Now, I’m not saying our women have to buy us these items, but come on! It shouldn’t be hard to know what items your wife/husband collect. Of course, we’d all cringe if they did this, and bought an obvious bogus piece.

So, let me hear your stories.

Okay Scott, seriously...I spit coffee out of my mouth laughing at that comment!