Vikings Player Tricked by Media -- An Autograph for "Charity"

I’ve often talked about how everyone wanting to do selfies, has hurt autograph collectors. Now, the stars have to stand around taking photos, which takes so much longer (and they have to worry about looking bad in the photo or who they’re taking a photo with).

Well, when things involving charities happen, it hurts, too (you can find the previous story on this site about a charity that actually deals in fake autographs, and charities keep using those companies). 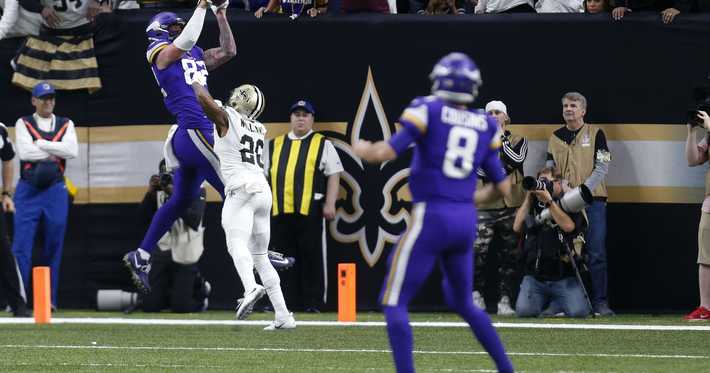 Well, Minnesota Vikings tight end Kyle Rudolph made a game winning catch, and in the madness of the locker room afterwards, a reporter asked for his gloves. He told Rudolph it was for a charity, at which point he graciously offered to autograph them before handing them over.

I’m sure he’s still happy that the Vikes advanced from the Wild Card game, especially since they upset the Saints, who were favored. But just as Eric Clapton decided to stop signing autographs for charities, things like this could hurt any future things Rudolph or other NFL players do.

The “reporter” that got the gloves sold them on eBay a few days later (I think they sold for over $300). I’m guessing if the reporter is ever discovered, he’ll just claim that he did that to raise that money for charity, which will be complete BS.

When I once interviewed Bill Wyman, the bassist of The Rolling Stones, he told me a guy came up with a guitar to sign. He doesn’t like signing instruments but the guy told him he was a fan. Later, he saw the guitar being auctioned. When he complained, there was talk that it was for a charity, too.

Rudolph was a nominee for the “Walter Payton Man of the Year” award, and he has a stellar reputation off the field. Let’s hope this incident doesn’t turn him off from charity events, or for signing autographs for those of us that aren’t trying to dupe him.

And good luck in the playoffs, Vikes! I did hear that the ebay buyer donated the gloves to a Children’s hospital.