William Shatner Says No to Autographs and -- GET A LIFE!

Most of us remember the Saturday Night Live bit that had William Shatner at a Star Trek convention. He’s answering bizarre, detailed questions about the show that he’d have no way of possibly knowing the answer to. They were such detailed things about a specific aspect of a certain episode, he finally, in exasperation, shouts “Get a life!”

The camera immediately shows a guy in the audience frowning. With a blue Star Trek shirt and Spock ears. It was a hysterical bit (back when SNL was actually funny).

I thought about introing this blog talking about that bit for two reasons. First, Comic Con is happening in my hometown of San Diego right now. The largest collection of geeks in the world will come into America’s Finest City and descend into downtown in costumes. Nothing probably smells worse than someone in a Chewbacca outfit in 85 degree sun.

The second reason I thought I’d intro with that bit is that William Shatner recently had a twitter fight with a bunch of his followers. And it all stemmed from him not wanting to sign autographs. Now, we’ve all known for years he wasn’t a good signer, but the rest of the public is finding this out the hard way.

It started with a fan tweeting that you shouldn’t ask Shatner for an autograph when he’s out in public or you’ll just get yelled at. Shatner responded, “Anybody that follows me knows I don’t sign autographs in public, so how about you just don’t ask me?”

He sent out a tweet that said if he’s out in public that you shouldn’t ask him for an autograph or a photo. Shatner said that he needed to defend his policy of not signing after he was called “rude” by fans. What was entertaining was all the follow up tweets and Shatner’s answers to them. 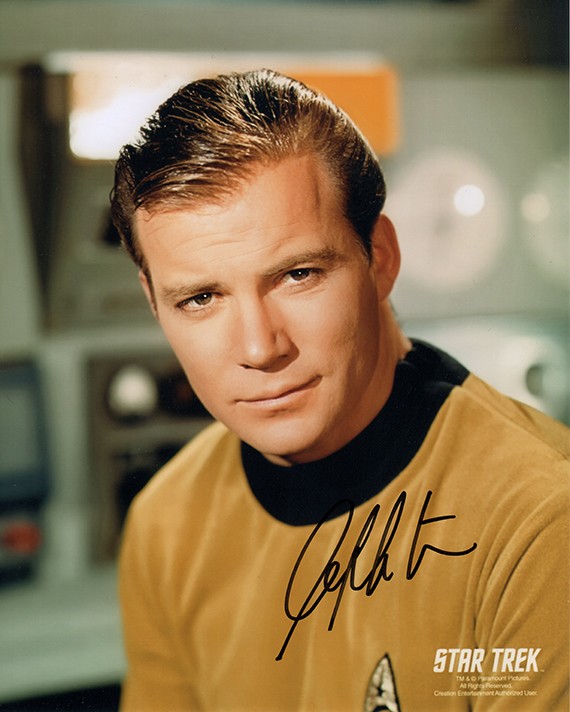 It started off reasonable enough. Shatner wrote “"If I’m out & about with family or waiting for a plane & I do it for one; an instant line 50 forms. So if I say no to #1 or #21 it’s the same - I’m a jerk. So to save time the answer is no. There’s a time and place for everything & conventions are that place."

A few fans tweeted that they pay his salary by purchasing tickets to his movies, and he responded, "I can make the same argument for whoever pays your salary. So if I purchase a product/service etc that your company makes my money is paying your salary too.”
The fans tried various ways to make Shatner feel bad about his “no autograph” policy, but he always seemed to have an answer. One person tweeted “Yeah God forbid a fan somehow cares about you enough to want an autograph. How dare they!” Someone else wrote that Shatner offering his signature “is a simple thank-you that costs nothing but means the world to a true fan.”

At one point he said, “I’m supposed to care about people who sneak up behind me to have someone grab a photo, who interrupt my private times enjoying my grandchildren, who bother me in restrooms& who even interrupt my calling my wife at the airport in order to request a photo or autograph?" he wrote.
When people asked if there was ever a time that would be appropriate for them to ask for an autograph, he responded, “No.”

When a fan asked, “What if you’re not busy?” He responded that the guy was living in a fantasyland, and he’s always busy. He added, "Anytime I’m out in public I’m doing something- going to a meeting, taking my grandchildren to the park, having a meal, traveling to a meeting or an event, etc... I value my personal time above all else. That’s why I go to conventions & come here- to make myself accessible."
He added, "I sign autographs constantly for charities and other organizations. I’m just not going to take autograph or photo requests in public because one leads to fifty which leads to hundreds which I don’t have time for."

When one person asked if he could get a private autograph, Shatner responded, “Not for you, Mr. Hairlick.”

I swear, I haven’t laughed this hard at a series of tweets since Kathy Griffin and Trump went at it.

There was another person that asked about the possibility of business cards, that say something like “I met WS and all I got was this lousy card” but quickly added, “then again, there’d be  a line of 50 wanting a card.”

That reminded me of the time my friend was at a movie theatre in line at the snack bar, and Orville Redenbacher was standing behind him. He said, “Are you Orville?” The white-haired man smiled and said, “Yes, but I don’t sign autographs. Here, have this.”

He handed my friend a card that said, “I met Orville Redenbacher, the popcorn king.” He thought it was hysterical, as he didn’t even want an autograph, or the card (although he kept it in his wallet, just so he could share that story).

What kept surprising me about all this is, just when I thought a person was getting really rude, Shatner would still answer. One person claimed he was “openly rude” with fans, adding “I understand having your space. You have been doing this a long time [he’s 87-years-old]. But I saw an interview you did once and you basically s--- all over your fans. That’s not cool either. We may not pay you, but we gave you that pedestal.”

Shatner shot back, “What’s wrong with being direct and truthful?” Would you rather I lie and say I injured my hand playing tennis so I’m not up to signing autographs today, dear?”

When someone tried to make a veiled threat, saying “Sir, when we buy a car, a freezer, clothes, etc....part of the cost is advertising dollars, which flow from us to the manufacturing company to the tv producers to the actors. Yes, we are paying. The money does not come from out of the blue.”

When someone suggest autograph seekers send Shatner a self-addressed stamped envelope, and the star can choose to send an autograph that way...he took the Ringo Starr approach. He responded, “I get over 100k requests each year for autographs. I give priority to 501c3 and registered charities and I still leave many charity requests unanswered so chances are slim.”

When Shatner was talking about how he makes himself available at various conventions (like Comic Con here in San Diego), someone talked about how the ticket prices can be expensive at those. His response was, “I do book signings every so often, I do make other appearances plus conventions offer volunteer positions too.”

Now, had I been responding to this thread, or been interviewing Shatner when he said that, I’d tell him, “Book stores don’t let you bring any other items. I can understand if somebody has 20 different 8x10s, or Star Trek memorabilia, you don’t want to sign it all. Especially when some of them just sell it on eBay. But if each person buying your book has two other items you sign, even personalize, it would make everyone happy.”

Now, beam me up, Scotty! And have my Sharpie set to stun.

he needs to take lessons from henry winkler and George foreman. it is too bad when some celebrities do this but it is their rights! will you ever turn down autograph request in person josh?

Shatner has every right to say, "No". What makes anyone think they are entitled? The guy has signed autographs virtually his entire life and is now 87 years old. Give him a break.

That's a great point, Joe, but here's the problem. He's always had the reputation as being....difficult. So, I don't give him a pass the way I would say, if John Lithgow turned 87 and just didn't want to sign.

Also, I think I'm the ONLY PERSON alive, that thinks something was fishy (no pun intended) in the drowning death of his wife. He was going to get a divorce, and probably have to pay her millions, and she ends up in the bottom of his swimming pool, with the weirdest 911 call I've ever heard.

That might be off topic, but I wanted to vent about him.

I've heard that isn't the most well liked among his colleagues. I do remember the pool incident. But murder? That's a bit strong. Although not out of the realm. Seems Robert Wagner's day may be coming as well.

Wagner will never be charged, even though he should be. I was at Book Soup in L.A. and saw a poster that he was going to be there that night to do a reading. I was so tempted to show up, just to heckle him. He's sooo guilty.

With Shatner...the 911 call just made no sense. He called them BEFORE even getting his wife out of the pool. Who would do that?

I just can't get behind wanting someones autograph who truly doesn't want to give it. Why would you want a photo with someone, when you have to look back and think he really didn't want to be in it at all? All our obsession (autograph collecting)  truly is, is for our own vanity-- unless it is a mutial respect between both parties. They say don't meet your heroes for a reason...Your hero might just not care to meet you

I read the article in the news the other day and I appreciate his honesty.  At least he is being forthright.  The David Crosby approach and many others like him are totally uncalled for.  I did like his comment that just about all his signatures on Ebay are fake.

Well, somethings above remind me of certain Columbo episodes. RE wanting a graph from someone who really doesn't want to give, we see Gilmour signing, but we know he hates it. We have seen some at least partial mechanical reproductions sourced from him as well, sent as hand-signed. I wanted his signature anyway.

Ultimately it's his choice and decision not to sign. If I ever see him in public I wouldn't ask because it's his position and asking won't change it. But if you join his fan club you will get an authentic signed picture and it's a reasonable cost to join.