About 10 years ago, I wrote a letter to Alan Rickman and asked for an autograph. A short time later, I received a letter from his assistant, saying that he was currently overseas filming, and couldn't sign at the moment. I thought this was incredibly kind. Other people would have either sent a fake autograph, or not responded at all.

I tried again about a year later, and this time, I got a signed photo along with another letter. This letter said that Alan had just left for New York, but that he was able to sign my photo before he left.

Based on all of that, I'm about 100% convinced this one is real. But just in case, I wanted to ask if there are any Rickman experts out there who could confirm it. Thanks so much for your help! 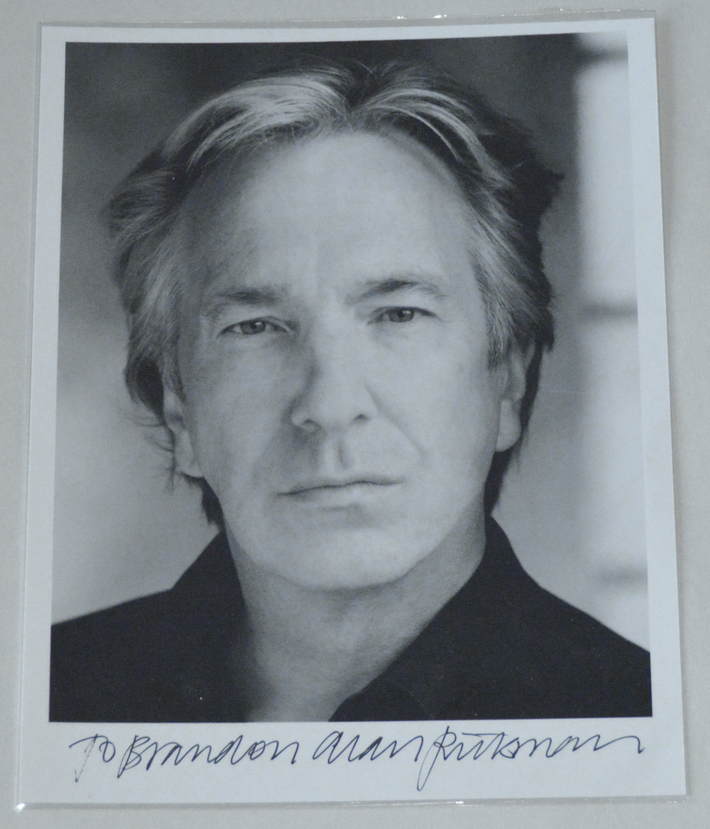 Hi there, it is 100% real. Alan never sent fakes. Melanie was always very kind and it was very nice from them both that they always sent back "at least" some reply. Alan was ultra super kind to his fans.

Yes, Alan and Melanie were so massively kind. He'd been famous for decades; but I imagine that once he starred in Harry Potter, the amount of autograph requests coming in would have been overwhelming. So the fact that he signed through the mail at all is remarkable.

And I've never heard of another celebrity who made sure that everyone got a reply in this way. When I was younger, I sent out hundreds of autograph requests. About 80% of them were simply never returned. Of the ones that were, probably half of them ended up being fake signatures. It was very rare to get an authentic response; and the good ones were usually from less-famous people who didn't get huge amounts of requests.

So I always remembered those two letters as something extra special. To me, a fake signature is worth less than nothing - especially when it's added to a multi-signed item, ruining the entire piece. So I'm glad Alan never did that. I can't think of any other Hollywood star at his level of fame who made such an effort to respond to every letter.

Thanks again for your help!

I was in Dublin for 4 days when Alan was there in theather (he was great!). And he remembered me when I always was there in the evening and always signed (photo, photo for my friend and book of John Gabriel Borkman - it was his character and name of the play). He was so kind thad he stayed and talked with us so I know he does not signed Severus Snape photos. There is just few pieces when he signed it through 1 and 2 Harry Potter. Then he stoped and when I asked him he said he will sign autograph of Severus Snape in the future when the madness around HP will be done. Well... this never hapened before his death. Even I saw him on last premiere of HP where he knew who I am and even in London's events or when he was in my city, where we talked too a little so I think he knew me (I was member of his fanclub in CZ)- he never signed Severus Snape photo for me and I would never push him. I send also a few letter through the years and yes, I tried Snape too, but he send me his own photo instead. :-D Why I send him a few letters? I could not to learn him my name and he absolutely ignored my silver pen what I inclued and the dark photo always sign in black pen. :-D Sorry for my English. I know I have some weakness. :-)

I have two letters here from Melania too. :-)

I just want to say I have always been polite, respecting his space and privacy, and I have always respected him not only as an actor but also as a person.

Thank you for your story! I'm so happy that you got to meet him. He sounds like such a great person. He was known as a very talented stage actor, and I always wanted to see him live in a theater production, but I never had the chance. So I'm glad you were able to see a production, and then meet him several times. It sounds like a very good memory, so thank you again for sharing it!

Also, your English is very good. I had no problems understanding you. :)

Here is photo of him and me in Dublin on his theatrical role - John Gabriel Borkman.

He was sweet. Photo signed when he was in Prague (my city) for film festival. Even he had no much time he stayed for a few minutes with me and I am sure Rima and security hates me for it. :-D

I met Alan at a literary festival in the U.K. back in 2001/2 and he was brilliant. Over the course of the next few years, we kept in correspondence and he would send me a lot of signed items.

One of the great people in this life.