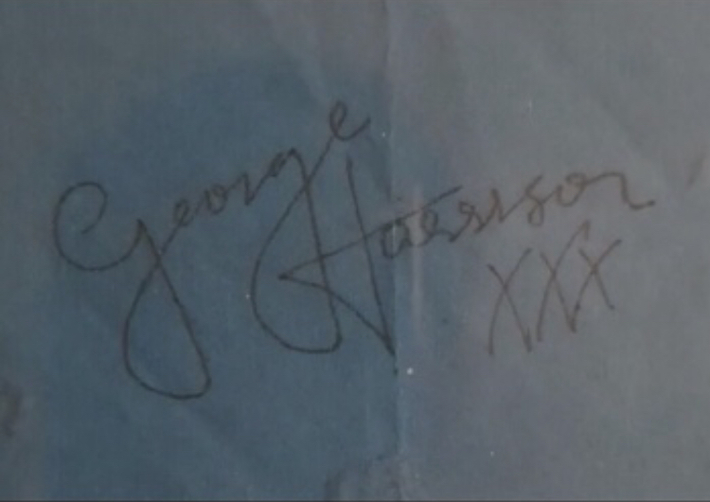 its a very nice story.  the autograph does not support it, the auto has to be evaluated on its own merit.

Myself and one other member believes it to be good.

Thanks for your comments though I appreciate it.

Not sure who the other member is, but the ones whom I see commented are ones I would want opinions from in this subject.

You posted a Lennon and Ringo here as well and specified you wanted to learn and that is why you joined. I would strongly suggest listening to those members opinions in this thread. That is my helpful opinion. Have a good day.

He has one member's thumbs up, Adam, so apparently that is good enough.  In the end, he is the one that has to make the decision as to whether he wants this in his collection.  if the story, and the opinion of one member against the others is sufficient,  then so be it.

for me, I trust the opinions of you Ballroom, Jim C and some others over my own when it comes to Beatles.

I took on board all your comments regarding the Lennon & Ringo and I`m not trying to be disrespectful but we are entitle to disagree in one case are we not?

This looks poorly drawn. No from me.

Be careful. That Harrison doesn't have a chance of being real in my opinion.

This is a fake autograph. But if he wants SO BAD to believe it's real, and that story works (side note: everyone has a story; some stories, when you Google, seem to check out because so-and-so was at that venue in 1967 and blah blah blah) -- we gave him the advice. Let him buy it.

When he eventually tries to sell it or dies and it is passed down, his family will find out the hard way -- it's a fake.

Let me give you a story. And I'm sure I've shared this before. I was backstage at Ringo Starr, the first "all star" tour (I had interviewed Joe Walsh, he was an hour late, and his manager was kind enough to say if I ever needed a favor he'd hook me up). That favor was...asking for backstage passes. It was on a military base "Camp Pendleton". My friend wanted to get backstage, and he snuck back. In the most insane way I've ever seen/heard. He brought a guitar he wanted signed, and he told security "I'm here with Joe Walsh's guitar." The security guard radioed back and the person on the other end said "Well let his ass in, then!" And he came backstage with me and got his guitar signed by everyone (but Ringo). Well, when we first showed up, the MPs at the base were in charge of the parking lot. The guys name tag said "Sgt. McCartney". We thought they did that as a joke, but it was his real name. When he saw my backstage pass, he begged me to get Ringo's autograph (Ringo is tough anyway, and I needed Joe Walsh to go to his trailer and get it for me!!!). So, when walking back to the car after he got his guitar signed, and I had my Sgt. Pepper record signed, I said "Oh crap, McCartney is going to be so disappointed." My friend said "No he's not." He took out his ticket stub and signed it "Thanks for your service, Ringo." And it was a great forgery. We handed it to McCartney as he ran up and he jumped for joy, for about 10 minutes. Guess what? When he tells that story, why would his friends/family not believe it? He WORKED the show. He saw two guys that had guitars and albums signed, and his ticket is signed. But guess what? It's not real.

See how a good story works, and can still be a forgery? (sorry, if you're reading this. Mr. McCartney)