Trying to decide if this 1955 Grace Kelly is real or not has been driving me crazy. Like those of Lady Diana, many of her signatures are very simple-looking but nontheless - or perhaps for that very reason - tough to call.

In the case below things are complicated still further by blobby ink and smudging issues.

I have looked at well over a couple of hundred examples of Grace's signature and handwriting over the last few days. I couldn't point to one signature that exactly matches the one below and there are many aspects of the signature that do not quite match the vast majority of other examples. I would still say, however, that it is real. I have several reasons:

2. The formation of certain letters in both the signature and inscription seem quite typical.

3. Certain letters are formed inconsistently, something you wouldn't expect from a secretary.

3. A secretary would most likely have made the signature simpler and even more typical.

4. The ink is old. Forgers wouldn't have bothered with Grace Kelly in the 1950s.

6. The ink blobs/smudging. I think a secretary might well have pulled out another photo and re-done it.

7. I haven't found evidence that Grace used a secretary for signing.

I'd be really interested in any comments on this one. 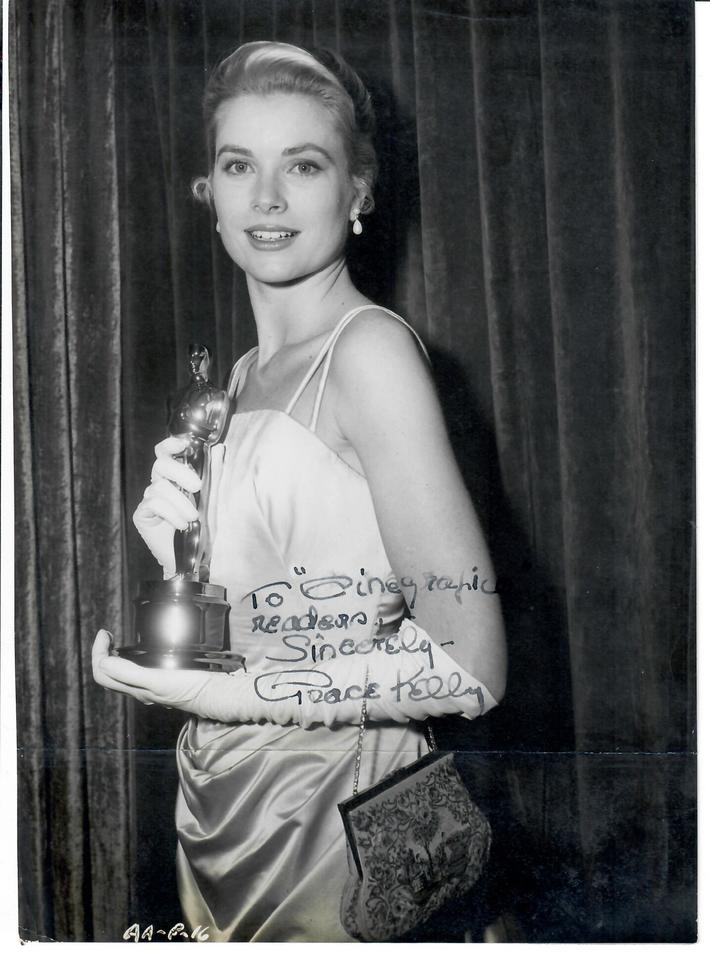 To your point about forgers.....Here is Grace Kelly with an Oscar.  I would think anything is possible as this is a desirable image.

Years ago, starting out in collecting, I made a major purchase of a Jean Harlow signed photo.  It had an old looking fountain pen signature which turned out to be fake.  I was a novice and just believed since it looked old, it must be real.  Boy, did I learn a lesson.

Aside from this being a Latin America magazine dedication, this just looks off to me.

Hi Etienne, for some reason my reply has landed up above your post - sorry for the confusion!

Thanks Etienne. I know the Kelly looks off but I really don't think anybody would bother to forge her signature in this complicated way. You also have to bear in mind that it was sitting in a publisher's archive for many years. Here is the reverse: I guess there is an outside possibility that a forger could have obtained the archive photograph and worked on that but that seems highly unlikely. That then just leaves the possibility that it is secretarial but somehow I cannot see a secretary bothering to fake things like the loop in the "a" of Grace and being so inconsistent with his or her letter formations.

Was the Harlow a true modern fake or vintage secretarial (i.e. by her mother)?

It wasn't her mother. It was in brown fountain pen and it turned out to probably be a fake that was aged a bit. That one still hurts.  I'm kind of surprised that I found myself wanting to continue to collect.

Oh I know precisely  what you mean about Diana  & Grace Kelly sigs.  I heard she did use a number of secretaries to sign on her behalf.

Hi Michelle, can you point me to any secretarial examples of Grace's signature or to any documentation about her use of secretaries for signing? I can't seem to find any kind of Grace Kelly signature study or secretarial signature database for her.

I remembe  a debate somewhere  re her using secretariies for signing and I am sure I have seen a study somewhere, -  trouble is I cant remember where I read about it  which I know isnt really much use to you.  Sorry!!