Autograph's Johnny Cash Signature Study — Be Part of It!

Has there ever been a nicer, more humble, more fan friendly superstar than Johnny Cash?

Johnny was the Babe Ruth of Country Music—the top-ranking Country artist of all time and the most loved. And Johnny loved his fans as much as they love him. So while like the Babe, Cash signed untold numbers of autographs, the supply could never meet demand...and probably never will.

Fans who couldn't meet Cash in person often requested autographs through the mail. The common belief is that he personally autographed those requests. But between his demanding touring schedule and later, his failing health and vision, it seems impossible that he could have signed even half of the mail he received.

A growing number of collectors and dealers now believe that many if not most Johnny Cash through the mail autographs were secretarial. We want to see if we can identify any secretarial styles, and at the same time build a reference collection of no-question genuine Cash exemplars to help identifying forgeries.

Are There Johnny Cash Secretarials?
If So, How Do We Identify Them?
Help Find Out!

You can be an important part of the study in three ways:

With your help, we can identify Cash secretarials if they're out there. Over time this should increase the value of genuine Johnny Cash autographs, and help protect future fans and collectors against autographs that aren't authentic.

Once we finish this phase of the study, we'll go on to identifying genuine Johnny Cash autographs from forgeries.

Well dang, I was getting ready to load these images to the previous thread. So, I guess I will post them here.

Let me start with some In-person examples I have: 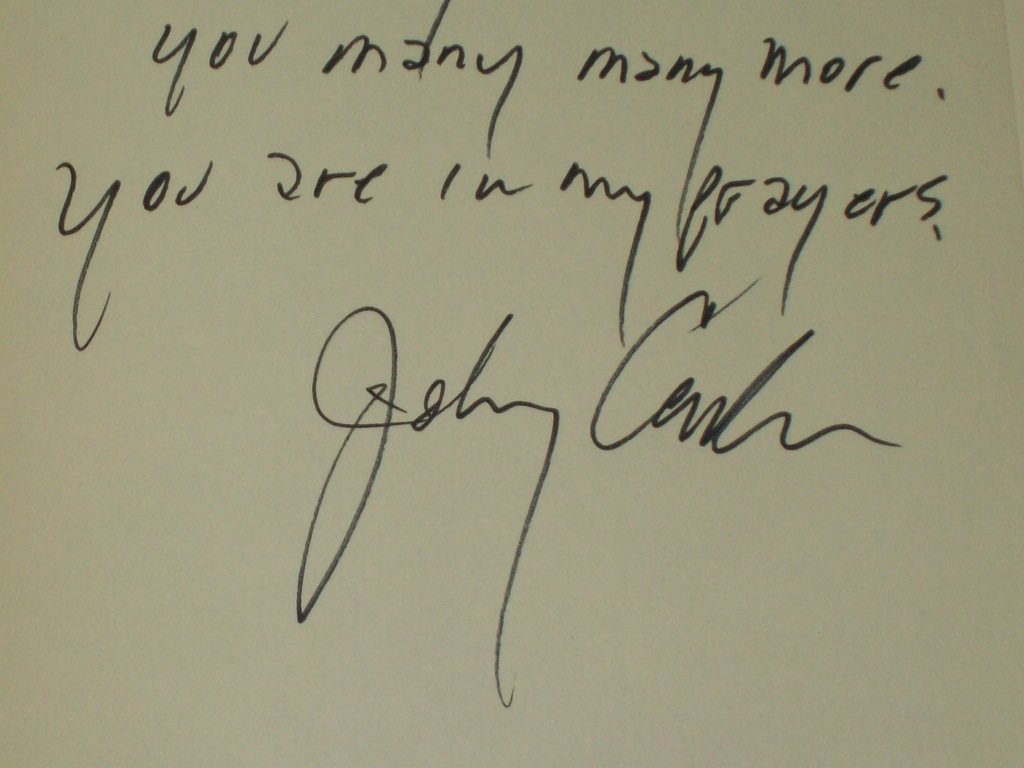 Next, my copy of Johnny's Autobiography signed in 1997 Outside of the Tennessee Theater in Knoxville, TN ( Johnny signed autographs for everyone that night. This was just a few shows before He stumbled on stage. That event was the end of his regular touring career ) Next are 3 autographs that were obtained on 7/5/2003 At the Carter Family Fold in Hiltons, VA. This was Johnny's last public performance before he passed away. He sang several classic songs and talked about June's death. I was honored to be on the front row and to meet many members of the Carter family as well as johnny's long time assistant / house keeper Peggy Knight. 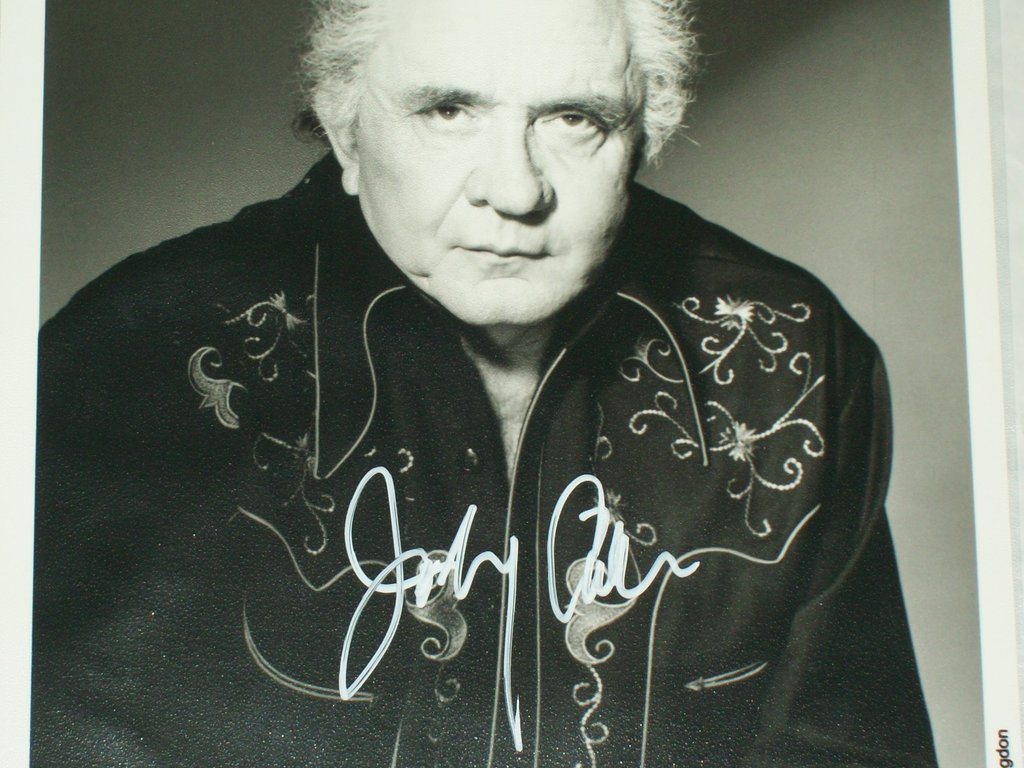 Here are two photos I took of Johnny at the show: The following autographs are a little outside of the rules that Steve put in place. However, these items were personal gifts to me by Bill Miller. Mr. Miller was one of Johnny's best friends and organized many signings and promotions with Johnny. Mr. Miller was also the previous owner / editor of Autograph Magazine. He now operates and owns Johnnycash.com and two Johnny Cash Museums ( one in Ca and one that will soon open in Nashville )  His book Johnny cash: An American Man is a wonderful look at Johnny cash through very rare photos, stories, and interviews.

These personal gifts from Mr. Miller are true treasures to me and my family. They are 100% authentic and I think that they will help this study. 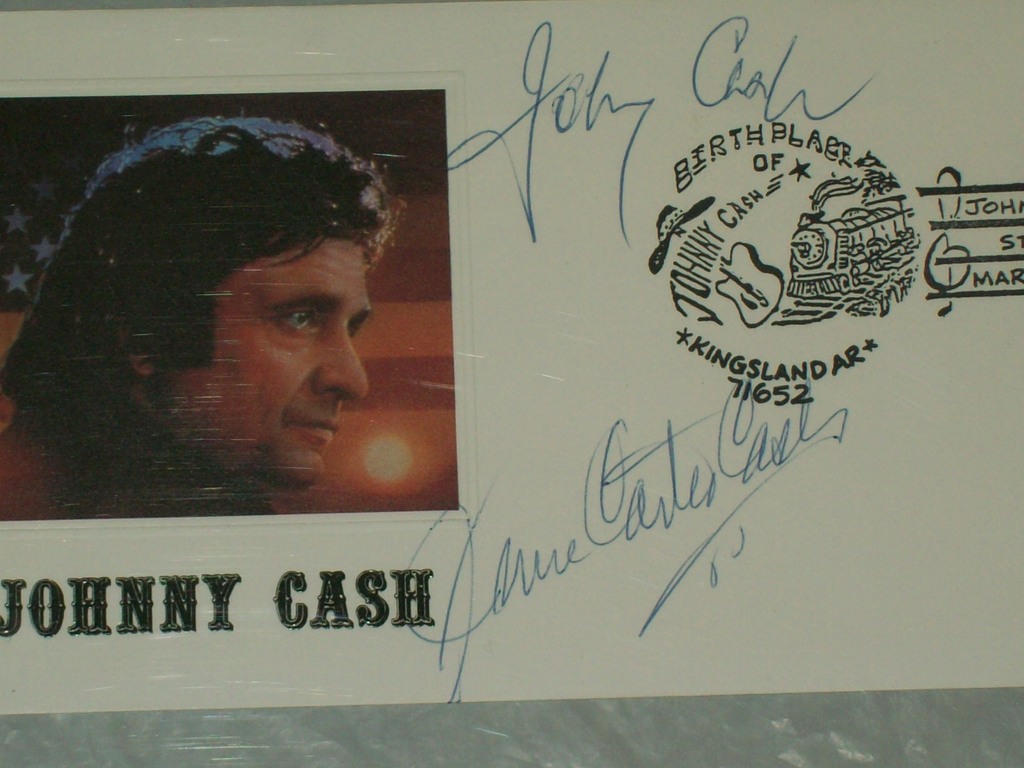 The following item was my 30th birthday present from Bill and his wife Shannon. It is a signed Highwaymen photo that is signed by all 4 members. Bill explained in a letter that accompanied the gift, that Johnny signed the photo and then had the rest of the highwaymen sign it backstage  in Las Vegas: Finally, Bill gave me one of the most special items that I have ever owned.  This item is a single page of handwritten lyrics to an un-recorded ( as far as I know ) song.  I will never be able to explain the joy of owning such a treasure.  I know this isn't an autograph, it is Johnny's writing though. It may help determine authenticity of other items. 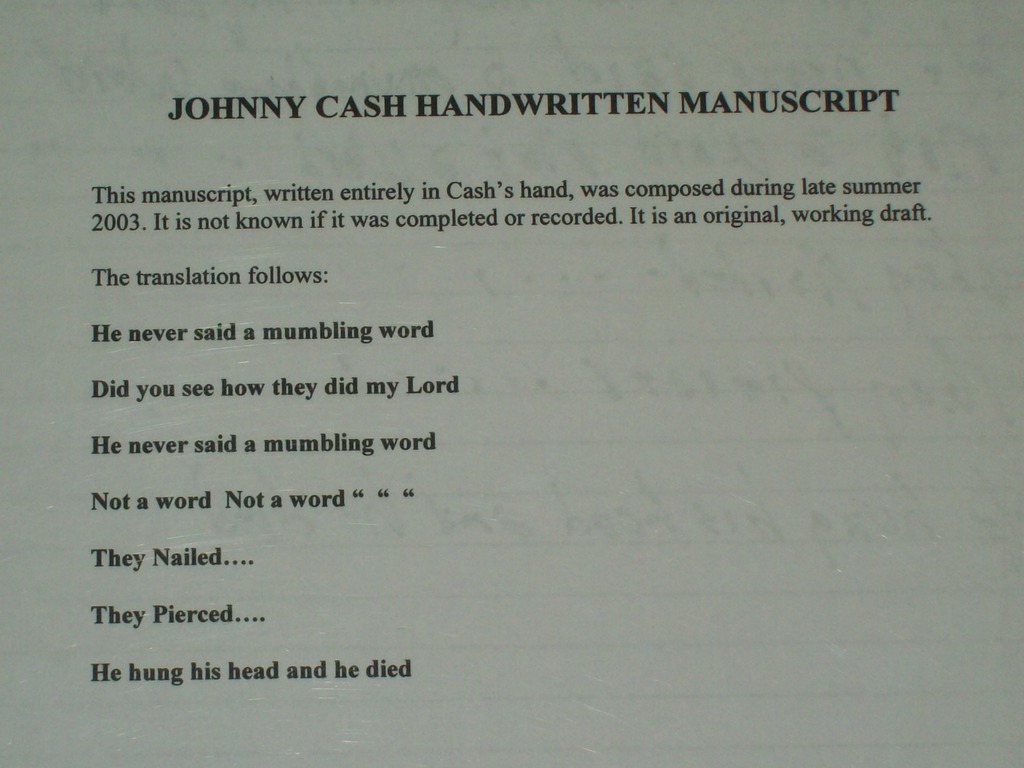 I can't wait to see other people's Johnny Cash autographs too.

Permalink Reply by David K on August 5, 2011 at 7:29pm
I only have one real J cash...but  its the ENTIRE CASH FAMILY who signed a guitar for me....June, Johnny, Roseanne, his mother, and the rest of the Cash family from the 1996  (as I recall) Cash family annual concert. (Roseanne was NOT there..I got here 2 weeks later in NYC)....I think this is the one such guitar in existence. with the entire family..dave

I will.. tomorrow..I have to find the scan.

Permalink Reply by Steve Cyrkin, Admin on August 10, 2011 at 3:11pm
It wasn't nested in the same reply thread. Go to the end of this discussion and you'll find it.

Permalink Reply by John cody on December 16, 2016 at 8:45am
Hi I have these two photos
Attachments: No photo uploads here I thought I would share my 8 x 10 photo autograph of a great country rock n roll star past... It's an honor of "The Man In Black"!!!

Am not familiar of the year but probably mid 90's.  Brandon's 5th one from the bottom look very alike and some others.

Permalink Reply by Brandon Mysinger on August 6, 2011 at 6:12am
You got this through the mail correct?