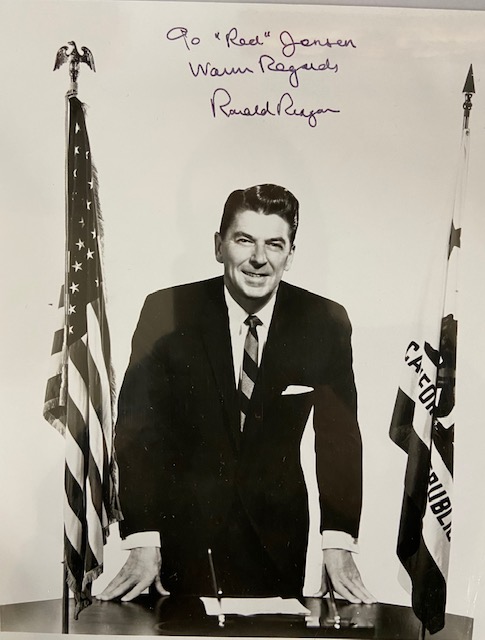 This 8x10 photo came from an estate along with a ALS from Reagan addresses to this “Red” fellow, who was an early donor to the Regan camping and seems to have been influential in the Sacramento area as there’s now a park named after him. The ALS seems very authentic and came in a envelope addressed in Reagan’s hand on his official Pacific Palisades stationary, dated 1966. However the two had multiple correspondences, and this photo came from the Governors office a few years after the ALS. Is it actually Reagan, or is it his secretary Helene von Damm? Any input would be greatly appreciated. Thanks ! 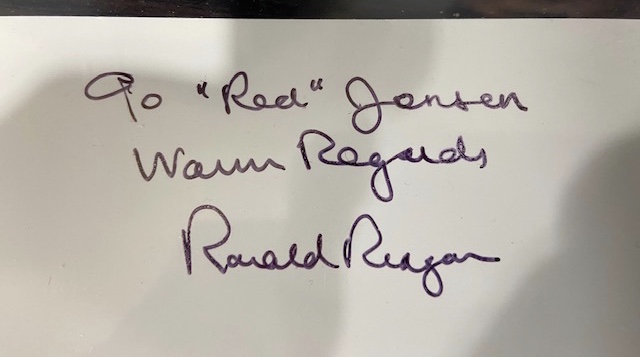 I recently posted a similar question on another Reagan signed photo.  Mine was likely neither Reagan nor von Damm.  However, the RR Auction signature study for Reagan and von Damm was very helpful.  I am very much an amateur, but IMO your photo seems closer to what is described in this study as a von Damm secretarial.  However, my opinion is not worth much when there are many experts on this forum.  Below is a link to the study.

Thanks for the reply! That RR study actually sent me here, given the few red flags it raised (particularly the difference in height from the L to the D.) I am near certain this came directly from the state capital given the fact that it was still in the original mailing envelope and the items provenance. So it being an upright forgery is unlikely, however I am highly suspicious as to it being a Von Damm or other non-malicious secretarial, and I would love to see similar examples any Reagan collectors might have come across!

I believe this to be signed by Von Damm.