ACTORS AND ACTRESSES WHO APPEARED ON THE ANDY GRIFFITH SHOW

One interesting thing about the show is that some characters are so strong you think they were in scores of episodes yet, in reality, they were in very few. Of the 249 episodes (250 if you count the Pilot which I do) filmed only Andy himself appeared in all of them. To me, it was surprising that Ron Howard came in second with 210 (plus 14 credit only plus the pilot) appearances. Frances Bavier ("Aunt Bee") appeared on 175 (including the pilot plus 4 credit only) while Don Knotts was on 143 (plus 9 credit only). Surprisingly no other character reached the 100 show mark. George Lindsey, Howard McNear and Aneta Corsaut were the only ones on at least 50 episodes. Jack Dodson, Hope Summers and Hal Smith each made over 30 appearances. Betty Lynn made 26 and Jim Nabors 23 episodes. All others were fewer than 20 episodes including "Emmett Clark" and "Ellie Walker" and "Warren Ferguson." Even "Ernest T. Bass" and "The Darlings" made fewer than ten episodes. The writing, casting and directing was so flawless that it just makes you think all of them were on most of the episodes.

It all started as an episode of Make Room For Daddy with Danny Thomas in an episode entitled "Danny Meets Andy Griffith" that aired on February 15, 1960.  This show introduced the world to Mayberry, North Carolina and the widower Sheriff Andy Taylor and his son Opie.  Francis Bavier also appeared in this episode but not as "Aunt Bee" she was "Henrietta Perkins."  Others that would later also show up on The Andy Griffith Show including Will Wright, Frank Cady, and Rance Howard.  As I have stated I feel this is the true beginning of TAGS.

Now my own list does not include the announcer Colin Male except for his appearance as a forest ranger on the show. Male in 65 of the early episodes was the announcer. I personally consider the announcer similar to a crew member, director etc. and not a member of the cast.

In all over 500 actors appeared on the show (not counting "Dolly the horse" or "Old Sam the Fish." About 475 of those had "credited" roles. There were scores of "extras" that would likely push the list up much higher. The names with ** after them have exemplars shown herein. The following is a list of cast members who were on at least five episodes:

These figures change as I find other episodes they are in. To make these autographs a bit easier for people to find I am going to make a list of the autographs in the reply section below. That way if you are looking for a particular person you can scroll down to find them below in this discussion. The autographs below are people who were on at least two episodes of the show. There is another discussion for those that appeared on only one show and another for "extras." KEN LYNCH (1910-1990) usually played tough cops or other authority figures.  He  had a recurring role of Sgt. Grover on McCloud.  He was on such shows as Star Trek, The Twilight Zone, Kolchak: The Night Stalker, The Honeymooners, All in the Family, Gunsmoke, The Munsters, The Dick Van Dyke Show, The Lucy Show, Gomer Pyle, U.S.M.C., Zorro and many others.  In movies he was in North by Northwest, Anatomy of a Murder,  tora, Tora, Tora and even I Married a Monster From Outer Space.  He was on four episodes of The Andy Griffith Show including of my favorites the second episode "Manhunt" in 1960.  His is a very scarce autograph to find.

KEN LYNCH as the State Police chief in the TAGS episode "The Manhunt." DON KNOTTS (1924-2006) was perhaps the greatest television sidekick in history. He won five Emmy's for his work on The Andy Griffith Show. He left the show to do movies. The Ghost and Mr. Chicken,The Reluctant Astronaut and The Incredible Mr. Limpet have become classics. Later he teamed with Tim Conway in The Apple Dumpling Gang movies. His start in acting was actually on the soap opera Search For Tomorrow in the 1950s. He then appeared in several episodes of The Steve Allen Show notably playing his "Nervous Guy." His first movie was a small but memorable role giving Andy Griffith a psychology test in No Time For Sergeants in 1958. He and Andy Griffith formed a close and lasting lifelong friendship. He appeared on Andy's mystery series Matlock. He was a regular on Three's Company playing Mr. Furley.  This is a typical signature. The above Don Knotts I got from Autograph World Auctions.  He was a very obliging signer.

Don Knotts autograph from the contract for The Don Knotts Show that ran from 1970-71.  Signed documents for Knotts are incredibly rare.  One was butchered by one of the "card" companies that commonly destroy otherwise rare items to make a stupid collector card.  This dated 1971. 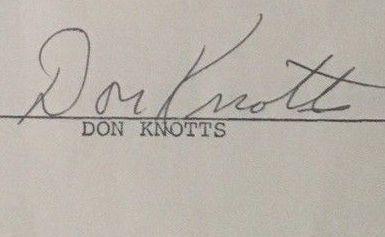 HAL SMITH (1916-1994) got his start in the 1940's doing bit parts until finding a place as a character actor on television.  He would later be prolific as a voice artist doing scores of Disney and other cartoons.  He even appeared in the Three Stooges movie The Three Stooges Meet Hercules.  His most memorable role is that of lovable town drunk "Otis Campbell" on The Andy Griffith Show.   Smith appeared as that character 32 times during the series run and once in the movie Return to Mayberry in 1986.  In the latter the repressively politically correct times (it is make believe folks) showed him as having giving up the hard stuff and was now selling ice cream.  Sadly his part would have been much funnier had they stuck to the original character.  Smith also appeared in a music video as "Otis" not long before his death.  He is one of the top 10 as far as number of episodes (for credited role) he is tied with Hope Summers at 32.  I usually rank Summers above Smith since she was in every season of the show he stopped in 1966.  Ironically his last appearance is the sobered up Otis in the episode "Otis the Deputy" in 1966.  He apparently never drank again since he never appeared on the show after that.  This is an 8x10 black and white glossy signed in 1990. MIKE STEEN (1928-1983) was a actor and apparently stuntman who did most smaller roles. His biggest credited roles were Crack in the World, Sweet Bird of Youth and This Property Condemned. He is credited with three episodes of TAGS as State Police officer in all three. The episodes were among my favorites "The Manhunt," "Andy and the Gentleman Crook" and "Barney Gets His Man." Steen appeared on other TV shows such as Wagon Train, The Adventures of Jim Bowie, Make Room for Daddy. Sky King, Sea Hunt and others. He had smaller roles in the movies Cleopatra and 55 Days at Peking. His acting career was less than ten years and he died relatively young. He used his real name Malcolm Steen for a couple years in the beginning. His autograph is elusive. 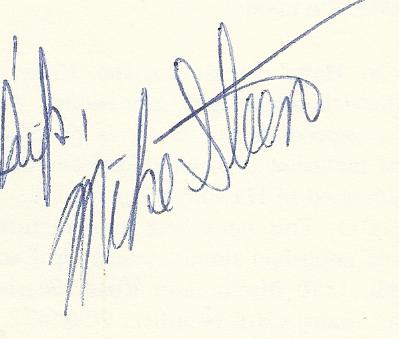 MIKE STEEN as a NC State Trooper on The Andy Griffith Show.  Steen on far right with Robert McQuain and Barney Phillips as the prisoner.  From the episode "Barney Gets His Man." Mike Steen credits in "Andy and the Gentleman Crook." 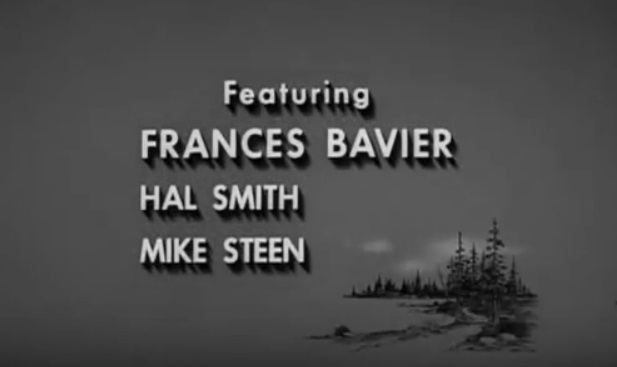 Permalink Reply by Tim Henderson on November 8, 2016 at 7:33pm
Here is my Charles P Thompson old Asa from the bank!! I'm still looking for the bank manager. Hope you enjoy
Attachments (don't post photos as attachments):

Thank you Tim that is a great autograph to have and yours is a very nice example.  He also played Dr. Roberts twice in later episodes.  Thompson was one of the older supporting actors on the show that lasted until almost the end.

Permalink Reply by Tim Henderson on November 8, 2016 at 7:36pm
Another rare one Dan Tobin!!
Attachments (don't post photos as attachments):