Share your in-person collecting anecdotes here. And the image to the left? Event flier signed by Clive James

On November 11, 2001 coworkers and I were assigned to capture an evening discussion at the 92nd St. Y. The focus of the discussion was on biological weapons and warfare. I think they scared the audience.

Broad, Engelberg and Miller are authors of the book, Germs: Biological Weapons and America’s Secret War. And because Krulwich left his two pages of notes behind, I grabbed them. 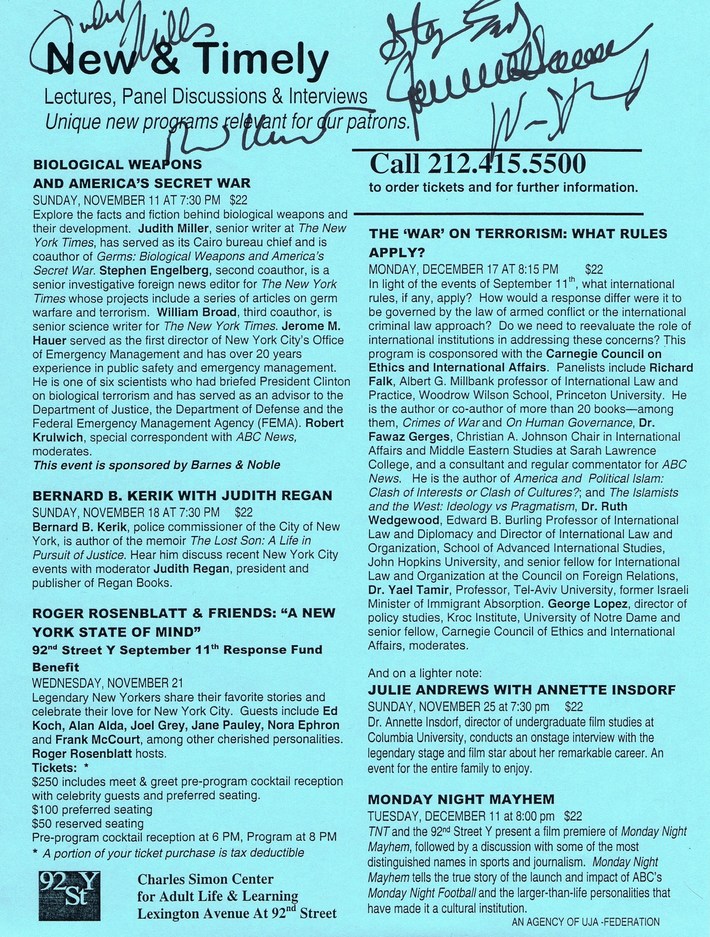 Not long ago got Albert Lee, long time session and recording guitarist.

2019 Members of the Alice Cooper Band.

You need to be a member of In-Person Autograph Collecting to add comments!

In October 2007, NewYork-Presbyterian hospital/Columbia held a very special celebration: the 10th anniversary of Frank Torre’s successful heart transplant. Frank is the older brother of Joe Torre, who at the time was manager of baseball’s New York Yankees which happened to be in the World Series.

Back in 1996 when Frank had the transplant, doctors thought that 90 percent of heart recipients live an additional year, and about 50 percent survive 10 years. Hence the celebration.

Frank Torre played from 1956 to 1960 with the Milwaukee Braves who won two National League pennants and one World Series, beating the Yankees in 1957. He retired in 1963 after two seasons with the Philadelphia Phillies. Joe Torre was a nine-time All-Star and the 1971 National League Most Valuable Player who totaled 2,342 hits in 18 big league seasons. After his career as a player, he served as a manager and won four World Series titles.

At the celebration, Frank, Joe and his surgeons all spoke, a lot of photographs were taken, and dozens of baseballs were signed. I did not get one but did get Frank and Joe to autograph two official programs, and sold them.

When I met Joe Torre, I told him I had been a Yankee since the 60s, only listening to them on the radio; not knowing what they even looked like until I went to a doubleheader in Cleveland, Ohio in 1970. It was when you could see both games for the price of one. I thought he really heard me.

The evening of the first day of the 2004 Republican National Convention in New York City I attended a gathering at Gotham Hall held by the Manhattan Institute. It was called, “Gotham’s Grand Old Party.”

Because I was a part of the two-person video crew that covered so many of their events, I was invited. The surprise guest was President George W. Bush's handler, Karl Rove.

At the party, Lawrence Mone, who was president of the Institute at the time spoke; then Rove; and Michael Reagan, the adopted son of President Ron Reagan and his first wife, Jane Wyman was broadcasting LIVE on the Radio America Network. He was pulling certain Conservatives from the guest list to be interviewed on his program, “The Michael Reagan Show.” Other big names included author Ann Coulter, who in 2018 penned the book, “Resistance is Futile! How the Trump-Hating Left Lost Its Collective Mind.”

At the party, I made sure I spoke with Coulter and grab her autograph a few times. During our conversation, I asked her if she really hated liberals and what they stand for. Her reply was, "It's my job to." How many of you remember Ted Sorensen?

Well, he was the speechwriter for President John Fitzgerald Kennedy. I spotted him in the audience when former Secretary of Defense Donald Rumsfeld came to the Council on Foreign Relations to complain about the media's coverage of the Iraq War. His remarks were titled, New Realities in the Media Age and took place in February 2006. I was there in the capacity of cameraperson for C-SPAN.

During the heated Q&A section of the program, Sorenson asked a simple question of Rumsfeld, "Why don't you change your foreign policy?"

A very nice man, he told me he was often asked by others if he or JFK wrote the famous Ask Not speech, and Sorensen always answered the same way: “Kennedy was the author.”

I ran into Sorensen two other times during my video career: once when he participated in a panel discussion with other presidential speechwriters, including Ray Price who wrote Nixon's resignation speech, and another time when he attended the Memorial Service for Arthur Schlesinger Jr. who was an aide to President Kennedy. Sorensen lost his eyesight as he got older and died in 2010. 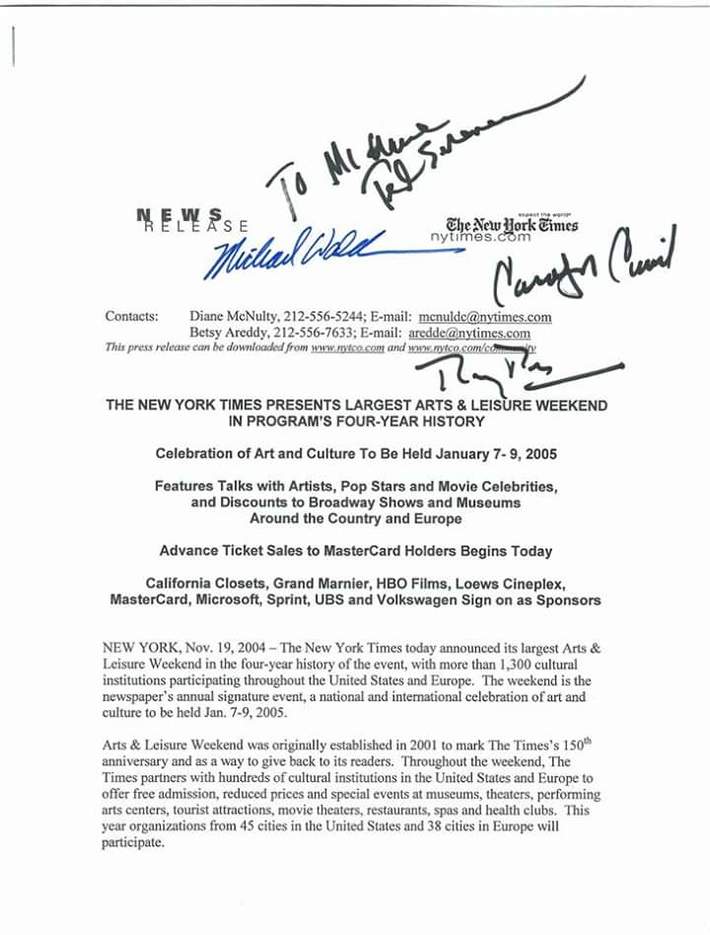 I was there when Rodney King came to Harlem to talk about his beating by Los Angeles police and his new book, "The Riot Within: My Journey From Rebellion to Redemption." It took place in April 2012 in the auditorium at the Schomberg Center for Studies in Black Culture in Harlem, and I was assigned to videotape it for C-SPAN.

You will recall what happened during that eventful evening which put King in the history books. On the night of March 3, 1991, the now-deceased Los Angeles taxi driver engaged in some unlawful behavior which resulted in even greater unlawful behavior by several LA police officers: a horrible beating. The officers were later cleared of their violent aggression and it resulted in the famous 1992 Los Angeles Riots.

It was the first time I used the two robotic cameras, switcher and digital video deck that C-SPAN provided me. And the program was going smoothly until Rodney, during the interview, decided to answer a question about the beating in an unusual way. With the cabled microphone still attached to him, he surprised everyone and got up off his chair and lay on the floor to show everyone how he tried to survive the clubbing and kicking by the police. So, what did I do? I told my assistant to quickly select a wide shot

It was a great discussion, which I also documented with an autograph and a picture during his book signing. 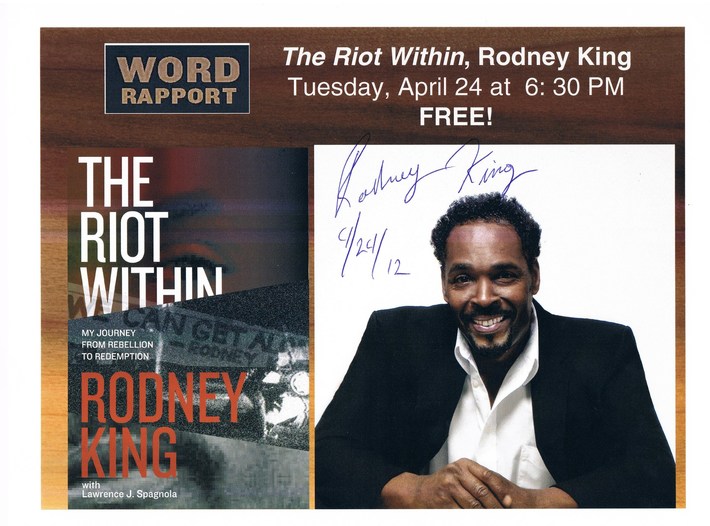 A nice man, but obviously flawed because of his struggles with both legal and illegal addiction. He passed away two months later at the age of forty-seven.

You never know who you are going to see in the audiences of events that are recorded for C-SPAN. In March 2007, at the main New York Public Library, world-renowned cultural critic Clive James spoke about his life’s work. In a book titled, “Cultural Amnesia,” he placed one hundred essays which he wrote over a 40-year period.

In attendance at this affair, and with Federal agent protection, was a Dutch politician and Islam critic, Ayaan Hirsi Ali. Before the James talk began, I secured her autograph on an official event program by approaching the agent for permission to approach Ali. Fun stuff.

She is a Somali-born atheist activist, writer, and politician, known for penning the screenplay for Theo van Gogh’s short film “Submission.” She fled Holland after receiving death threats and the director of the film, van Gogh, was assassinated in the Netherlands.

Ali was also an advocate for the rights and self-determination of Muslim women; in 2005, she was named by Time as one of the most influential people in the world; and in 2006 she wrote her memoir titled, “Infidel.” She put out a second autobiography, “Nomad” in 2010, and a third book this year titled, “Prey: Immigration, Islam, and the Erosion of Women's Rights.” At a week-long conference titled, “Democracy at a Critical Juncture: The Ongoing Implications of 9-11,” almost any issue you can think of regarding the aftermath of 9/11 was discussed. It took place a PACE University, only blocks away from ground zero, in June 2003.

Coworkers and I covered one of the panel discussions titled, “9-11, Iraq, Empire and Democracy” about the book, The Iraq War Reader: History, Documents, Opinions. It is a compilation of essays, articles, and opinions on the history and future of Iraq and the Middle East. This was only four months after the U.S. invasion of Iraq to look for weapons of mass destruction.

The panel participants were:

After it, I grabbed their autographs on three separate event handouts. 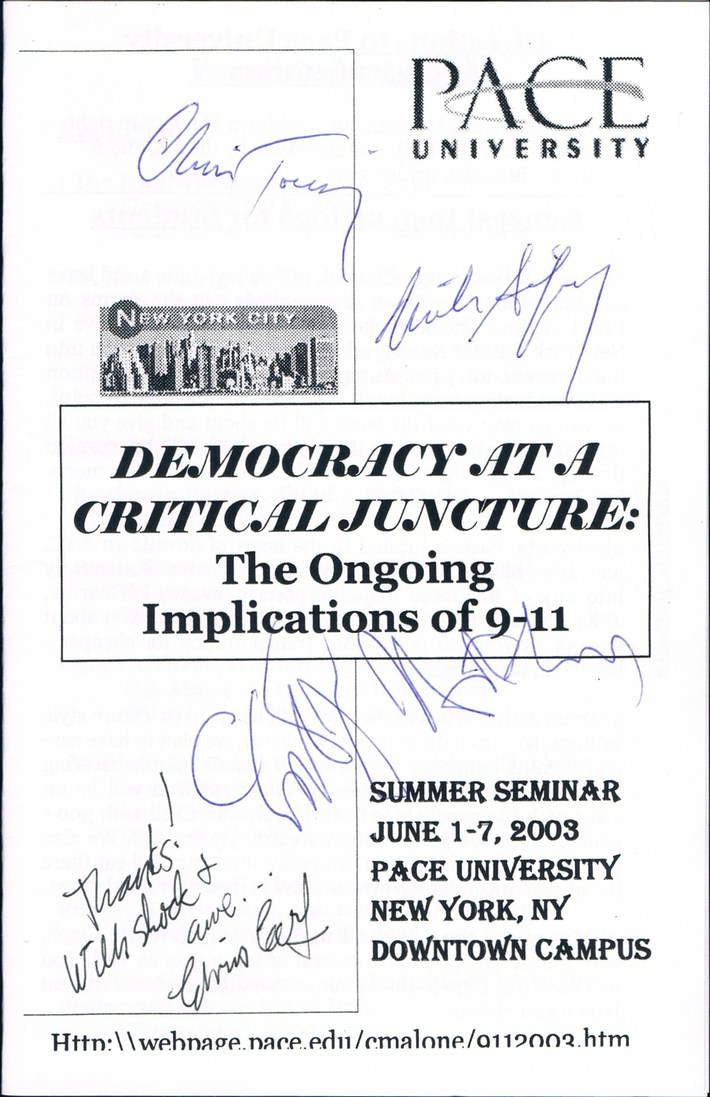 Back in May 2000, a coworker and I were assigned to videotape a Baccalaureate at Princeton University in New Jersey. It featured remarks from a former graduate, Her Majesty Queen Noor of Jordan.

I recall her talking about her years at Princeton in the early 70s when she was one of ninety-five women in a class of eight hundred: ninety-five of one hundred fifty-five women on the entire campus. She was happy to learn the ratio of men to women was going to be fifty-fifty in the year 2004.

She met King Hussein in Jordan while planning an aviation training school. While married, she promoted initiatives in the areas of disarmament and peace, education, women and children's welfare, community development and human rights, and more. Noor was widowed a year earlier due to the death of her husband.

Not to be denied an autograph, three years later she came to Manhattan to talk about her book, “Leap of Faith: Memoirs of an Unexpected Life.” And although I wasn’t assigned to cover her, I showed up at the 92nd Street Y where she spoke and waited around until I saw an opportunity to ask her for her autograph. I captured it on a printout of a BookTV announcement of the event.

Very cool, that I got to cover her and get her autograph. Very cool. In June 2007, I was asked to videotape a very special dedication at the Morgan Stanley Children’s Hospital of NewYork-Presbyterian. It was a ceremony marking the opening of a new bronchoscopy and endoscopy center named in the memory of Laura Rothenberg, who died at the young age of twenty-two. When she was three days old, she was diagnosed with cystic fibrosis (CF), an incurable genetic illness.

The CEO of the hospital, three doctors who cared for her, her mother and boyfriend spoke; three friends performed two theater pieces, and singer-songwriter Ron Sexsmith sang a favorite song of Laura’s.

The host of the affair was Bill Murray, the actor and former SNL funnyman who befriended Laura while she was in the hospital, and actor Debra Winger, her adopted “godmother” was in the audience. Winger had a special relationship with Laura, some of which was written about in a July 2014 article titled, “Living as a Spiritual Practice.”

Laura was a very special patient at the hospital who at a young age became an advocate for the patients’ point of view. Author Andrew Solomon wrote a profile about her; she spoke at university lectures, on National Public Radio, and wrote a book that was published after her death, “Breathing for a Living.” 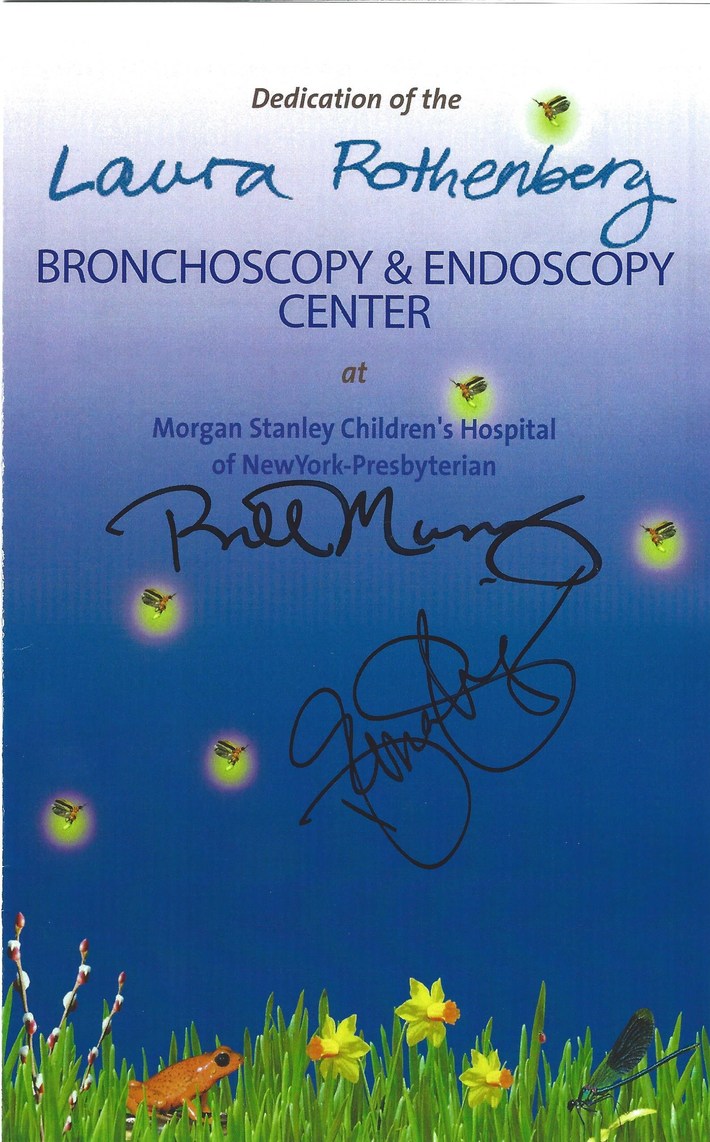