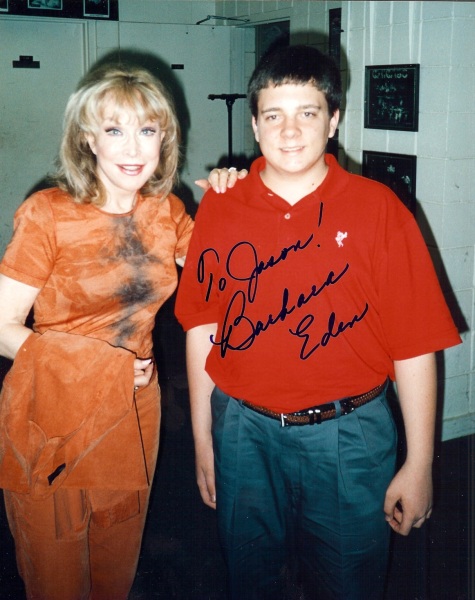 One of the most unique autographs are when you met the Celebrity (s) and took a picture with them, then get them to sign it.Feel free to share you thoughts, suggestions, expierences, photos and brag…Continue

meeting celebs who have you met? who do you want to meet?

i've met over 200 celebs in person...to all autograph magazine live users,what are some of your favorite celebs that you've met?maybe we have some in common... 1Barbara Eden2Britney Spears3Victoria…Continue

What would you like to tell us about yourself, your collecting, or business.
the excitement of collecting & meeting celebs...

What is your level of expertise?
Professional

Why do you want to join Autograph Live?
I absolutely love autograph collecting, its such a unique hobby, and I don't know what I would do if i was'nt collecting autographs :)

Who can we thank for telling you about us?
Steve Cyrkin

Why do you collect?
for fun as a hobby =)
I always enjoy acquiring new autographs to my collection.

What is your favorite autograph in your collection?
Britney Spears, I have multiple autographs from her.

You can ask anyone living or dead for their autograph. Who would it be?
Lucille Ball, i've always wanted to meet her, but sadly she has passed =(

David Wright said…
Hi Jason, I have fired up my iPad on wifi to send you this and just above the comment box into which I am writing this you will see a link that is "Add Photos" ... Touch that and you are all set :) cheers, David

The collecting is going good. I got to meet Billy Gibbons of ZZ top a few weeks ago and that was awesome! It was the 1st in person autograph I have got in 6 months. Through the mail I have been  writing to anyone that was a part of The Andy Griffith show and I have got back probably 10 so far. I have also been writing to some Heisman winners and getting them to sign my Sports Illustrated.  Still trying to get my hands on A Brittany Spears autograph through the mail but no luck. I have seen some successes via venue but not my stuff.  I cant wait for Christmas my wife and Mom usually get me an autograph every year. I will let you know who i get. Oh yea and after the 1st of the year i will be writing your girl Barbara Eden will she sign a few things or should i just send 1. So hows collecting been for you lately? Hope you have a great Christmas and TTY soon!

Kevin Chesney said…
I mainly collect Philadelphia Flyers auto's,cards and other mem,plus other hockey stars. I do have many other celeb's, mostly horror, saw,Friday the 13th and Devils rejects. I have a little of everything. Over 400 auto's

Josh Board said…
I think a bottle that appeared on the show would be HUUUUGE and cool for any collection.
I find it odd that they are really expensive because...that isn't a show like MASH, or CHEERS, SEINFELD, etc. Although, it is a popular show, it's 2nd tier. Although, what jumps a bottle into the "expensive" category, is because of WHAT the item is.
I mean, if you had a military hat from MASH, or a bottle of booze that was at the bar in Cheers, well...kinda cool...but who really cares. To have A BOTTLE from Jeanie, is huge.

I have a friend who is a teacher, and one of his students became a big deal in Hollywood. One of the movies he worked on was The Doors (a film I didn't care for). He has a gold phone that Andy Warhol (crispin glover) hands to Jim Morrison (val kilmer). I've offered him so much money for that piece (and it really looks crappy...just an old phone, spray painted gold). But The Doors are my favorite band.

Dr. Richard Saffro said…
Thanks Jason. I've just started to pay more attention to this nice site. Sorry for the delay in the comments. Dr. Saffro

Josh Board said…
Presidential autographs always are worth something. You could get Jimmy Carter on a scrap of paper, and one day, you'll have no problem getting $100 for it (although, he does sign a lot and is living a long time...maybe that was a bad example).
VPs aren't worth NEARLY as much (obviously), but because Al Gore is in the news (winning Oscars, going green, etc), that makes his worth more than past VPs (dan quayle, etc). Your item is certainly rare. In fact, I'd be willing to guess it's one of a kind.
But, newspapers turn yellowish and aren't highly desirable. It has to be a huge headline, like Pearl Harbor Attack, Lennon being shot (signed by McCartney...that would be huge!). Him not running...not as big a headline.
Find a way to keep the newspaper from weathering out and getting too dry and yellow. You'll have an item that in 50 years, might pull in a pretty penny. Heck, right now, if you wanted...I'm guessing you could get $100 for it, but not much more.

Obviously, a drumstick signed by Ringo Starr, or someone that has that household name, is going to be worth something.

I got Meg White, of the White Stripes to sign a drum stick. Then, when I saw Jack White and had him sign my CD, I figured...why not have him sign the stick as well.
Well, he went on to become the drummer for the Dead Weather, so now it's kinda cool to have! (not to mention, I'm a huge White Stripes fan, so I like it on that level, too).

Something signed by Brit's entire band is certaily cool (if her signature is on it), but probably won't be worth a lot. With her signature and the band, that's good...because many Brittany items out there are bogus (the fake heart and first name signature is easy to forge).
As I always advise...collect things you love, not for the value. The value aspect only burns you in the long run (because you end up buying something that's fake, or doing something else silly). If you collect what you love, it will always retain the value TO YOU, which is what's important.

Josh Board said…
Jason, I loved looking at all your photos. Great stuff. Any question you EVER HAVE, please...do not hesitate to ask. As a writer for this magazine, I love nothing more than answering questions our readers may have.

Let me first state -- I am not an expert, by any means. But, as a 40-year-old that has collected autographs since I was 8, and have read every story I ever saw on the subject, I do think I have an opinion that is probably close to anything you can get from the "experts".

Your drumstick reminds me of a time I was 15, and I saw Eric Burdon of The Animals (House of the Rising Sun, and so many other great songs). The drummer was amazing. Blew me away. I got his autograph.

It's worth absolutely nothing.

Just as Britneys drummer probably won't be. The only way it will EVER be worth anything, is if he became famous. That is rare for drummers. In other bands, singers are obviously the most popular and well recognized. Not just because they are the "front men" (or women), but they also generally write the songs. Exceptions, of course, for Rush drummer Neil Peart, who wrote all the bands material, AND is considered one of the best drummers in rock. A drumstick signed by him would be worth something.

Also, there is never any "proof" that said drummer used that stick in concert. That's always a tough sell.

Obviously, a drumstick signed by Ringo Starr, or someone that has that household name, is going to be worth something.

Julie Snyder said…
Hi Jason. Nice collection you've got! Yeah, all the Osmonds are really nice people. The only one I havn't met is Alan. I tried at their 50th Anniversary Reunion concert at the Orleans in Vegas back in August of 2007, including asking Jay if he could help arrange a brief meeting. No luck in the end, though. :(

I'm flattered you ask and will be delighted to oblige.

Have a great weekend.